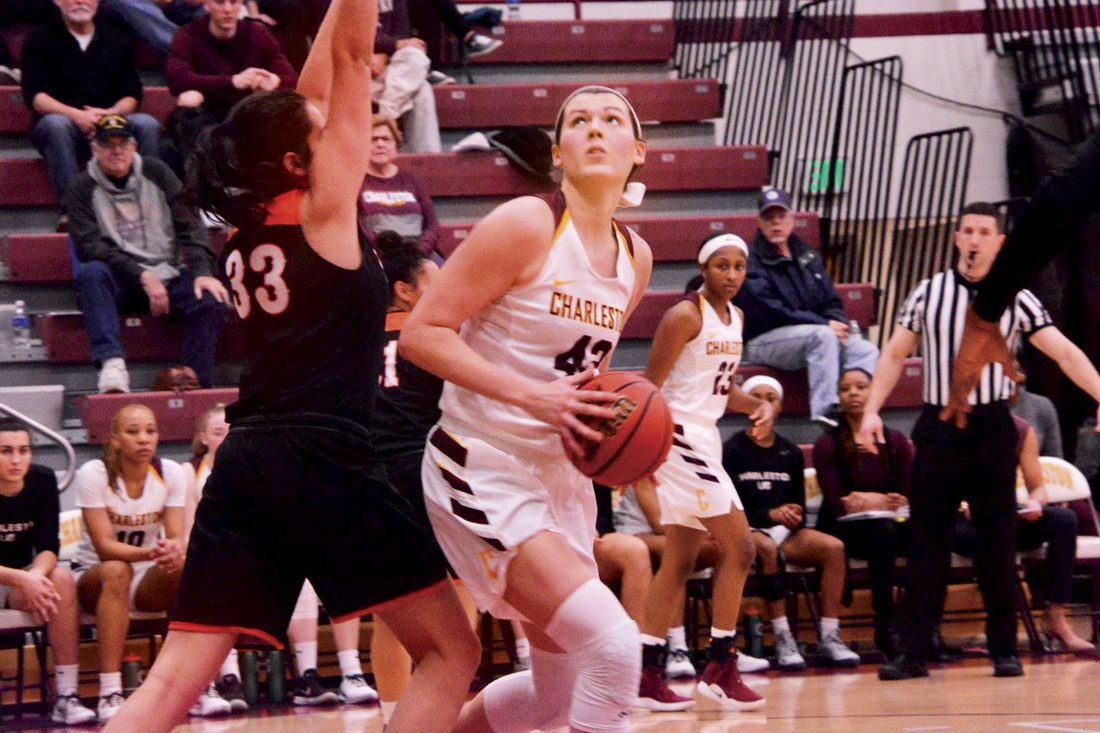 PARKERSBURG — Anna Hayton arrived on the University of Charleston’s women’s basketball team fresh off one of the more storied careers for a Parkersburg South center.

She and Jill Stephens set themselves apart with their play in the paint as Patriots and each claimed multiple Class AAA all-state first team honors because of these feats.

This game knowledge followed Hayton to the Golden Eagles then expanded over the course of the last four seasons. Through a journey of dieting and body transformation, Hayton lived up to her want to be one of the best players in the league as a result.

Everything culminated this season in the senior’s second straight All-Mountain East Athletic Conference First Team selection, as well as an appearance in a conference tournament semifinal game.

Along the path to both, Hayton established herself as a go-to player for head coach Becky Burke.

Spurred on by an off-season of weight lifting with boyfriend Zac Grossenbacher, Hayton showed her new look in a 30-point, 12-rebound effort against Ohio Dominican back on Nov. 13.

This game set the tone for the entire season according to her.

“Things were naturally coming to me and it was the first time I saw I could really do big things,” said Hayton.

Hayton passed the 1,000 point-threshold with a double-double effort of 14 points and 10 rebounds against West Liberty back on Dec. 11. Later in the year, she exploded for 30 points against the Hilltoppers. Her scoring proficiency continued until her final game against Notre Dame. The senior tossed in 19 points and pulled down seven boards. For the season, she averaged 19.2 ppg and finished with 1,401 points and 759 rebounds.

“Overall it was a pretty good career. I couldn’t have asked for anything else out of this season, either,” said Hayton. “If you had told me I would do what I did at the beginning of my career I don’t think I would have fully believed you. I believed I would do something good, but not something special.”

If Hayton could go back and tell her freshman self one thing, they would be wise words.

“I would tell myself a lot of basketball depends on your confidence and your mental state. I should go out on the court every time and dominate if I want to dominate,” said Hayton.

She also said she would get her body right sooner with diet and exercise. This way she could avoid the learning curve through both activities at the collegiate level.

Even though the pressure affected her in a transfer consideration moment her sophomore season, she’s glad she stayed on the team. “I loved coach Adam Collins but without coach Burke it wouldn’t have been the same. She put me as a play in positions to succeed,” said Hayton.

As for remembering some of those games she succeeded in, there aren’t many recollections. The bad games offered more learning opportunities than the good ones.

“I hated playing against Marissa Brown of West Liberty. She got the best of my almost every time,” said Hayton. “I always had good games against West Virginia State for some reason though.”

But this won’t be the end of her playing career. She plans to keep playing overseas. While grabbing exposure at showcases is currently impossible due to the COVID-19 pandemic, Hayton plans to make a mixtape and send it out to prospective clubs.