Sierra Mason had a game-high 16 points in win 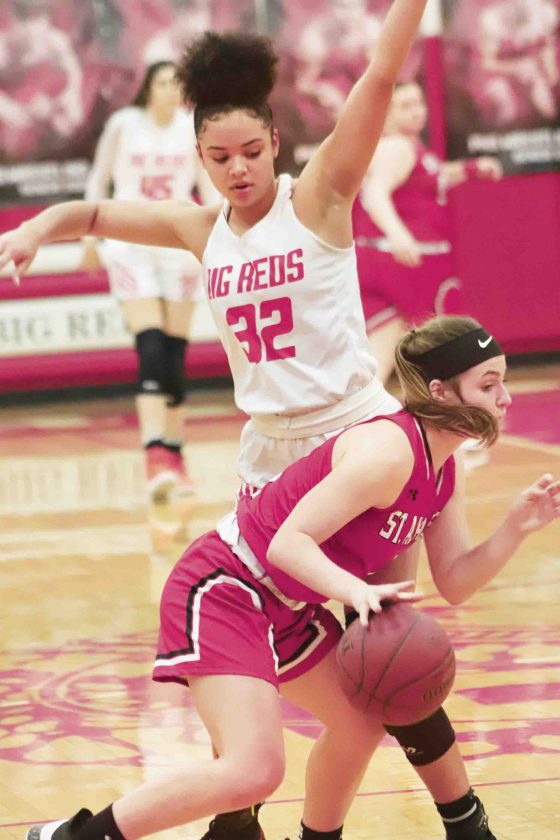 PARKERSBURG — St. Albans was the last team to give Parkersburg’s girls a loss during the regular season in the Mountain State Athletic Conference.

The Red Dragons of first-year head coach Shayna Gore had an opportunity Thursday night inside Memorial Fieldhouse and gave a game effort through three-plus quarters before the two-time defending Class AAA state champion Big Reds pulled away for a 65-46 triumph.

Kiersten Eggleton paced the Red Dragons, now 6-14 with senior night set for Saturday versus Elkins, with 13 points and a game-high 17 rebounds.

“I think it’s the first time (Maddi) Leggett hasn’t played since her sophomore year at the regional final at Cabell Midland and we played like this too,”

admitted Big Red boss Scott Cozzens, whose squad limited SAHS to 26.9% (14 of 52) from the field but lost the rebounding battle 44-40, which included giving up 18 on the offensive end. “She had her wisdom teeth out yesterday. Give them credit. They killed us on the boards and that’s how they stayed in the game. They played hard and she’s (coach Gore) doing a good job.”

“We didn’t play well for whatever reason and I’ll give St. Albans a lot of credit. They came out and were the more aggressive team and we just stood around like we thought we had a big ‘P’ on our chest and we were going to walk in and they were going to roll over and die. The girls learned that didn’t happen.”

Consecutive 3s by BB Clark and Maddie Oxley, who had nine points, gave the Red Dragons a quick 6-0 advantage and the visitors led 10-7 at the 3:49 mark following a 17-foot jumper by Megan Thornburg. However, Mason recorded back-to-back three-point plays and Lowers’ layup gave PHS a 15-10 cushion after one.

Parkersburg’s 13-0 spurt was capped at 6:20 of the second when Tatiana Popa drained an NBA 3 for part of her seven points. St. Albans cut it back to five following a Kira Hinzman deuce along with an Oxley triple via an Emma Parsons dime. It was still 22-17 with 4:26 to go before the break when Eggleton got a putback. PHS, though, ended the half on a 12-4 run, capped by a Lowers layup thanks to a Maggie Richards assist, for a 34-21 lead.

The two MSAC programs got off to a sluggish start in the third, combining to go 0 for 9 from the field with four turnovers in the first 1:59. Hinzman’s inside bucket with 68 ticks left in the stanza kept the Red Dragons within striking distance at 39-31, but Popa drained two foul shots and Crites scored for a 12-point bulge after three.

A trio of foul shots cut the gap to 43-34 with 6:11 remaining, but PHS continued its pressure and finished the game on a 22-12 run. Both Hayley McCale and Kisten Roberts had 3s for the red and white.

St. Albans, which got a trio of steals from Eggleton and four assists by Thornburg, finished with 28 turnovers. The Red Dragons were actually the last team to defeat the Big Reds in an MSAC regular season game, coming out on top 66-47 back on Jan. 20 of 2017.

PHS, which is off until Parkersburg South invades Wednesday for the Big Reds’ senior night, finished with 20 steals. Taylor Miller had five and Bre Wilson four.