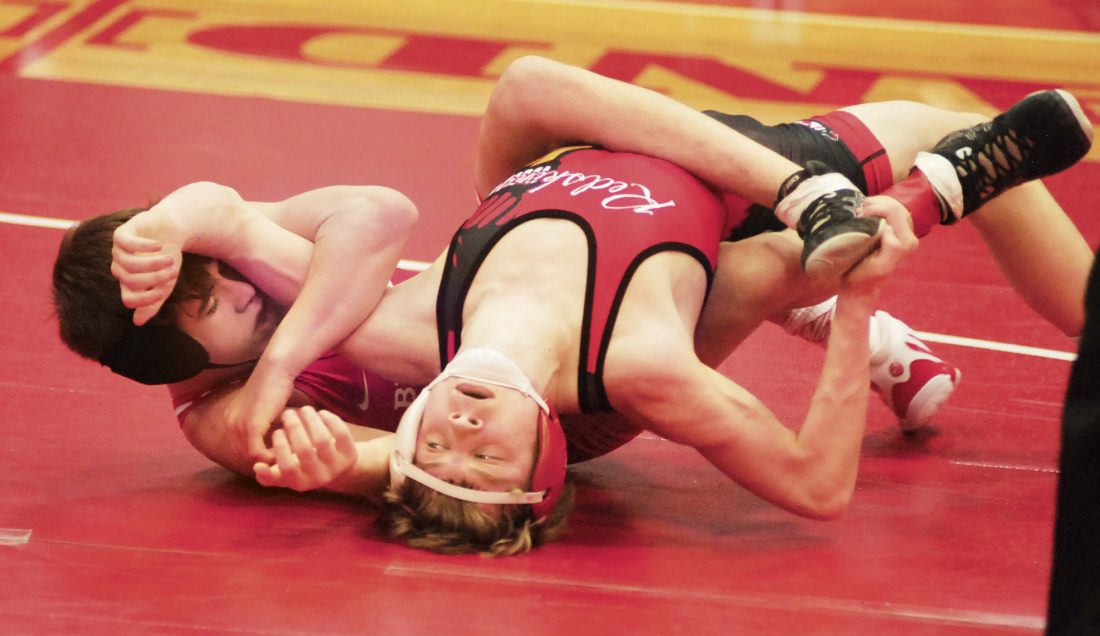 PARKERSBURG — Four was the number of the day for the Parkersburg High School wrestling team of head coach Matt Littleton.

During Saturday’s Mountain State Athletic Conference championships held inside Memorial Fieldhouse, not only did the Big Reds secure their fourth consecutive team title, but 160-pounder John Martin Best captured his fourth career crown and was named the Most Outstanding Wrestler.

Best, who was one of seven Big Red finalists, went on the offensive early and led 12-2 after a period before pinning Woodrow Wilson’s Hezekyiah Creasy in 2:25.

“From what I can see we are only going up,” said Best, who watched the red and white score 184.5 points to top runner-up Riverside (150). “Our attitudes changed a lot in the past week ever since South and I feel like because of that match and everything it’s been a positive influence in the room.

“We all now have a fire in our guts to get out and perform. We don’t have a full lineup, honestly, but we still have enough of us on the team that we can make an impact.”

Big Reds Garret Donahue (120) and Bo Moler (138) each won a conference title for the third time in their careers. Donahue led 6-2 after one and eventually secured a mat slapper in 4:34 versus Seth Holt of Cabell Midland.

Moler registered a quick takedown against seventh-seeded Austin Conaway of George Washington and pinned the Patriot with 10 seconds left in the opening period.

The first Big Red to wrestle in the finals was unseeded 113-pounder George Cantwell. No. 1 seed Lucas Talley of Hurricane trailed 5-4 early in the third after an escape, but took the lead for good at 8-6 with 52 ticks remaining en route to a 10-6 decision.

At 145, Parkersburg’s Aydan Edwards won his first conference crown via a 5-4 decision against Riverside’s Zachary Holstion. The Warrior used a takedown and two near fall points for a 4-0 lead after one, but Edwards battled back and secured his winning takedown with 34 seconds left in the match.

Riverside, which finished ahead of Cabell Midland (104), George Washington (101) and Beckley (89), watched heavyweight Austin Chapman repeat by virtue of an 8-2 decision against No. 2 seeded Flying Eagle Ian Pomeroy.

Head coach Rob Archer’s Huntington program, which had finished runner-up to the Big Reds each of the past three seasons, has been hit heavy with illness. However, 220-pound No. 3 seed Eli Byrd was runner-up to No. 1 seed Zach Dillon of Cabell Midland. Dillon won via pin in 29 seconds. The Knights’ other champ came at 106 where Jackson Stewart major decisioned Hurricane’s Nathan Roche, 12-2.

Beckley’s only other finalist — 195-pound three-seed Devan Gauldin — won his first title via a 7-4 triumph against No. 4 seed Grant Murphy of Huntington.

“I think we wrestled really well today,” coach Littleton said. “Our upper guys got the job done. At 170, Mason Merrifield, freshman, came in and filled a roll with an injured Tyler Boyd and fought through and got third. I think we came together as a team and worked really hard today. I think Aydan’s match was a big swing for momentum itself.

“Obviously, George had a good win in the semis (bested Riverside No. 2 seed Cobran Johnson). He got a late start this year because of appendicitis, but he’s starting to get in the swing of things and he’s wrestling tough right now. Jeffery got a big bonus point pin there. Things came together as a whole, not just one or two guys. Everyone did their job and that’s how you get in these positions.”