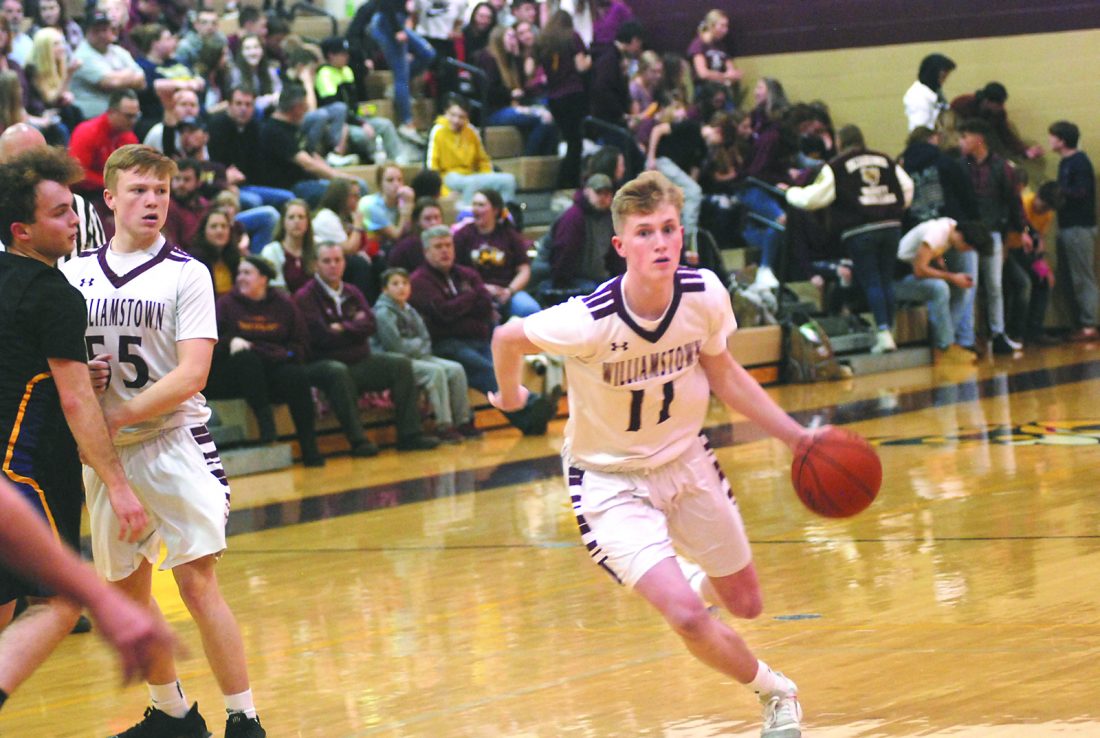 Photo by Josh Hughes Williamstown’s Sam Cremeans drives to the basket during the Yellowjackets’ 83-32 win on Monday against Wood County Christian. The victory on Senior Night saw all five seniors get into the action.

WILLIAMSTOWN — A strong showing from Williamstown’s seniors played a part in the Yellowjackets’ 83-32 win over Wood County Christian in a Monday Senior Night clash.

While the Wildcats came into this year starting five seniors in Garrett Napier, Trey Davis, Camden Huck, Tucker Dougherty and Ryder Davis, Williamstown honored its five seniors by putting them all in the starting lineup together. The combination of Peyton Amrine, Eli Inman, Colten Luther, Brandon Kiger and Issac Cutright started the evening off with a bang through a majority of the first quarter.

Amrine kicked things off with eight of his 17 points in the first five minutes, and he wasn’t alone. Makes by Inman, Cutright, Luther and Kiger assured all five players points, as the ‘Jackets took a 19-8 lead after the first.

Another scoring run by WHS took up most of the second quarter, and a basket from Cutright made the score 36-15 with 2:10 until the break. However, the visiting Wildcats hit three shots from beyond the arc in a row to close the gap at the half. Trey Davis knocked down the first two, and Napier buried the last one to help his team only be down 36-24 at the half.

Head coach Scott Sauro’s Yellowjackets conceded the final nine points of the period, and he wanted his group to respond.

That second half happened to the tune of a 47-8 run that saw a stretch of 32 unanswered WHS points. Tallies from Dougherty, Ryder Davis and Jesse Woomer weren’t enough to keep up with Class A’s No. 1 team. Xavier Caruther’s notched 14 of his 17 points during the second-half attack, as he tied Amrine for the lead in scoring on the night. When ball movement was working for Caruthers and company, it made them difficult to stop. Coach Sauro described what he saw during the spurt, as his team gets ready for a Little General Shootout game against ranked Greenbrier West on Wednesday morning from West Virginia State University. He also gave thanks to the five seniors who helped shape this program during their time in maroon and gold.

“Those seniors have given a lot to our program. They work hard every day in practice. They’ve been focused for games, and I think that it’s led to us having a successful (19-0) season,” he said. “(Caruthers and Amrine) can shoot the ball, but it’s really a function of guys getting them the ball at the right time. I know Eli Inman made several great passes. Colten Luther made a few great passes. We were moving the ball well, and getting an open shot is something the team accomplishes. If you can get that consistently, that’s when your shooting percentages go up.”

For the 5-21 WCC Wildcats, head coach Dan Morris spoke about not giving up on the year, as a WVCAT play-in game approaches.

“That was good for us in the second half,” he said. “The second quarter’s been a really bad quarter for us. Williamstown is the No.1 ranked team for a reason, and Scott (Sauro) always has them ready. From top to bottom, they’re athletes. We wanted to be aggressive with them and not be afraid to take it to them. We don’t play again until a week from Thursday. We have a play-in game, and I feel pretty confident about it. We’ve just got to keep playing hard and making progress, because there’s always next year.”