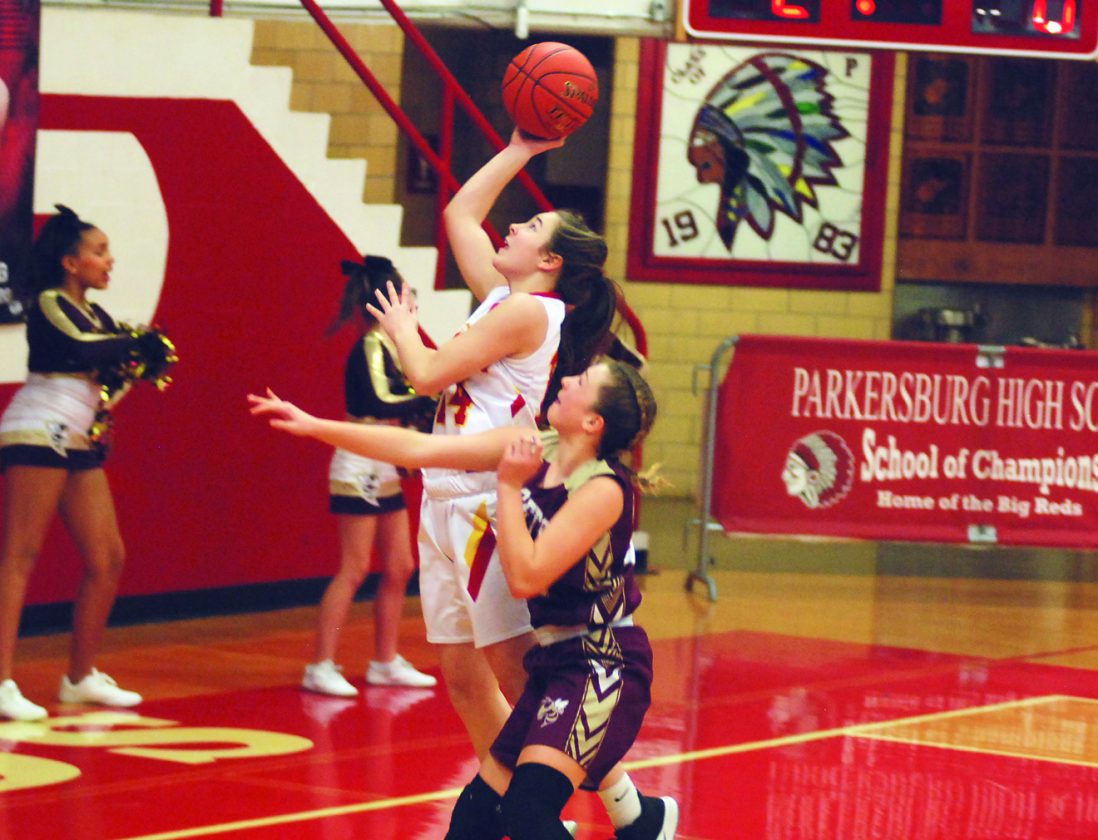 Photo by Jay W. Bennett Edison’s Gracie Shamblin makes a lay-in and proceeded to convert a three-point play in the first quarter after being fouled by Williamstown’s Becca Shamblin during the WCMS 7/8th grade title game Thursday at Memorial Fieldhouse. Edison (12-0) never trailed in a 31-25 win.

Edison (12-0) tallied the first 11 points in the sixth-grade game and never looked back en route to a 44-20 victory against Hamilton.

In the 7/8th grade title tilt, Williamstown was looking for an upset after losing two regular season games to the Eagles by a combined five points. However, Edison received a game-high 14 points from Gracie Shamblin, who added eight rebounds, six steals and two assists, as the Eagles held off Williamstown, 31-25, to also cap a 12-0 campaign for head coach Sara Wilson.

“They are a special group. They were undefeated in both the sixth grade and eighth grade seasons. Great teamwork, not a selfish bone in their body. They love the team more than they love themselves.” 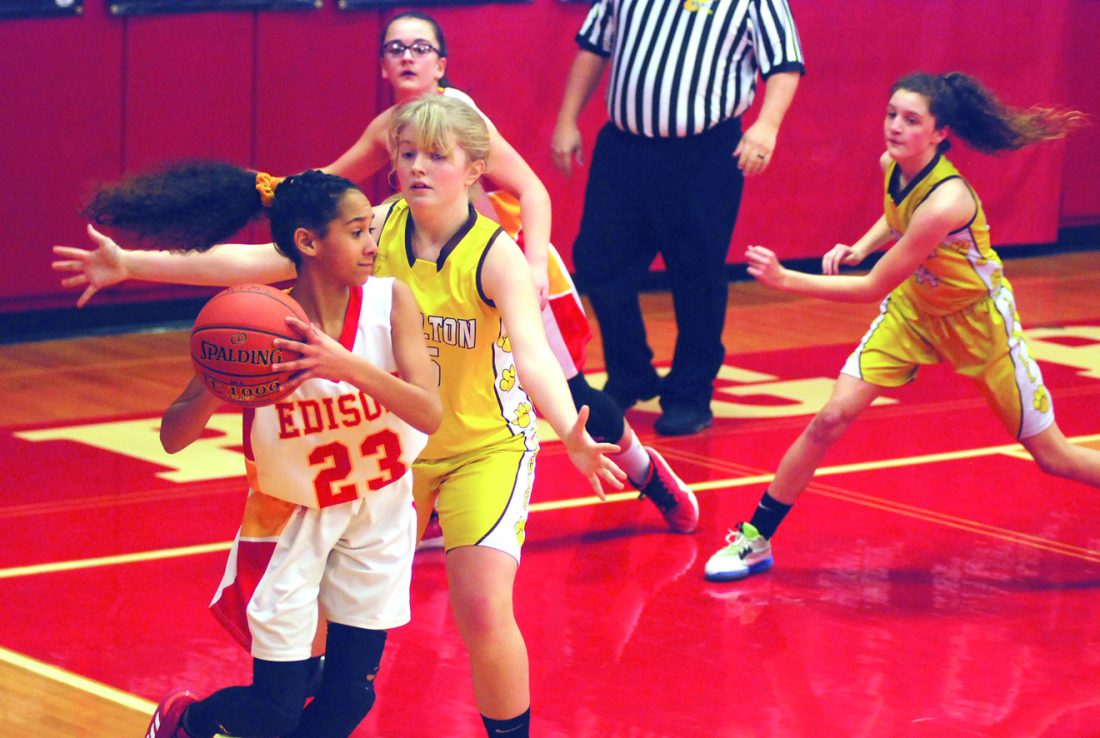 Gracie Shamblin opened the championship game with a bucket and then a three-point play, but the ‘Jackets led 6-5 after one when Rinard capped the first quarter scoring with a short floater.

A running kiss by Small following a defensive rebound by teammate Anna Yost gave the Eagles the lead for good at 7-6. Pickens’ field goal with 39 ticks left before intermission made it 11-8.

Although two foul shots by Johnson made it 12-10 early in the third, Shamblin took over for Edison after that. After she blocked a shot, she raced coast-to-coast for a lay-in and then followed that up with another steal and layup. Following yet another steal by Shamblin, Edison led 18-10 when she got the ball ahead to Schaffer, who also had six steals, for an easy basket.

Finally, a 3 by Becca Shamblin got WMS on the board in the third quarter and after a deep trifecta from the top of the key by Rinard, head coach Randy Lowe’s squad was down just 20-16. Gracie Shamblin, though, made her fourth steal of the stanza and dished off to Longwell for a deuce. Shamblin’s steal and layup with 22 seconds to play allowed Edison to hold a 24-16 advantage heading into the final six minutes.

Williamstown, which shot 25.8% (8 of 31) and had 24 turnovers, still had a chance after Shamblin’s trey cut the deficit to 29-25 with 42 seconds to play. WMS had opportunities to cut into the deficit after that, but missed a shot and had a turnover. Small’s two late made foul shots set the final score.

“This is a special group for a couple reasons,” coach Lowe admitted. “One is we only have two eighth graders (Landis and Rinard) on this team and we have four players who never played basketball before.

“Out of nine players and with four who never played before, for this team to come this far is awesome. I’m so proud of them.”

Hamilton, which was led by Kenslee LeMasters’ six points and Kennedy Porter’s five, couldn’t overcome 34 turnovers along with an 8 of 42 (19.1%) shooting performance.

Shyanne Hays (11 points) put the Eagles ahead for good just 29 seconds into the affair when she scored via an Emilee Owens (six points) assist. Payten Mackey, who had a game-high 13 points, then assisted on a Lucie Cline bucket for part of her 10 counters.

LeMasters’ bucket finally stopped the 11-0 run, but Hays converted a lay-in after Macy Singer grabbed an offensive board and Edison led 15-2 after one thanks to a Cline baseline floater.

The Eagles went ahead 21-2 before Wildcat Brennan Harvey scored. A Kennedy Porter made foul shot for Hamilton allowed the ‘Cats to close the first-half with a 23-9 deficit.

Things didn’t get any better for Hamilton (8-4) after the break as EMS opened the third on a 13-0 run. Eagle Reagan Ward’s free throw closed the scoring in the third as HMS trailed 39-10.

Hays was a rebound shy of a double-double and the Eagles finished with 26 steals, which included six apiece by Owens, Mackey and Singer.