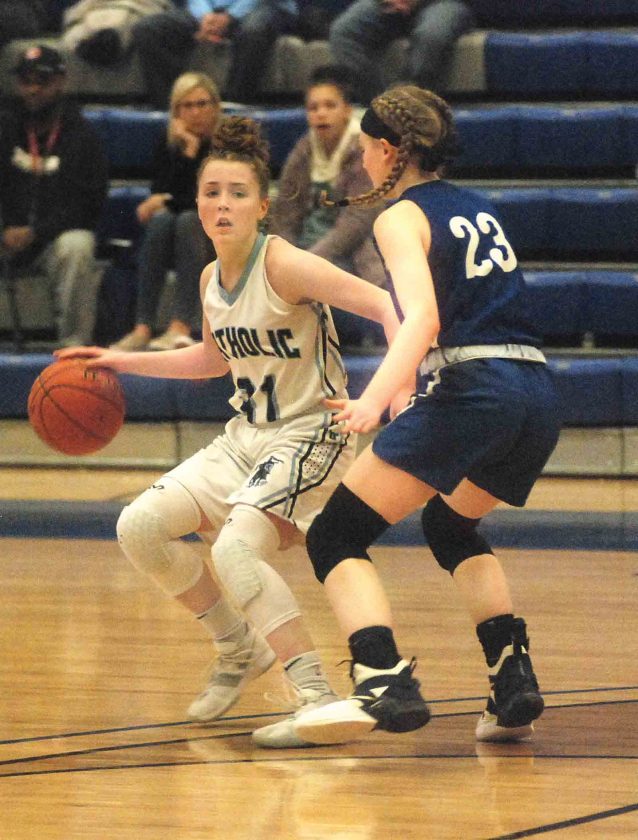 PARKERSBURG — Tonight won’t only be a rematch of last year’s Little Kanawha Conference girls’ basketball championship game, but a replaying of a game less than one month ago.

Parkersburg Catholic took each game comfortably, but the situations differed from the 8 p.m. title game inside the Glenville State WACO Center.

Two years ago, Gilmer County brought a young team to the prize fight. Amy Chapman’s crew received a humble lesson against a Crusaderettes team who went on to play for a state championship.

Then back on Jan. 20, the Titans’ journey to Parkersburg came without one of their key personnel in Taylor McHenry. Her recovery from a hand injury still sat in the healing phase. Without her the Titans played a physical contest, but the game was still over by halftime.

Now, the Titans are a much more experienced bunch. Also, they are entering this game with some momentum after a win over Class AA Lincoln County. McHenry chipped in 10 points and brought great defense as she returned Gilmer County to full strength.

Expecting upon tip off the same group that upset the Panthers and played his undefeated and second-ranked team in Class A tough last month is Catholic head coach Marty Vierheller.

“Amy (Chapman) is a fantastic coach, a state champion coach, and her kids are going to be extremely well prepared. And I know that they have had this date circled certainly since we played them the last time. That being said this isn’t something we take lightly. This is a very big deal for us and to have a chance to win a third streak makes it that much more special because it doesn’t happen very often in our league,” he said.

Making sure Coach V’s team doesn’t take anything lightly are three LKC Player of the Year candidates in Madeline and Leslie Huffman, alongside Aaliyah Brunny. The trio, scoring 49.7 of Catholic’s 73.1 points per game, have combined in some form or another to power the Crusaderettes’ defensive and transition game Chapman knows presents numerous problems.

“We are just going to have to deal with the pressure and quit making so many bad passes and cut down their transition points as much as they can. The girls know what I am talking about this season as opposed to last year. They know what to expect. We have to be physical and be fundamental,” said Chapman.

Adding McHenry back to the fold gives Gilmer a few more options to accomplish its goal, according to its leader.

“She gives us some things defensively. And brings some speed and can get to the rim,” she said.

It is a great development for the Titans as Vierheller openly let know he doesn’t plan to change much from the first matchup this season.

Benefitting from 33 Titan turnovers, the Crusaderettes used 15 of them during a 31-7 run in the first half as the statement moment of the game on a cold, wintery night.

“We are not looking past them one bit. We are looking forward to representing our division and hopefully coming out on top,” said Vierheller.

Before the Titans and Crusaderettes do battle, Williamstown and Braxton County meet for the third-place game with a 6 p.m. tipoff.