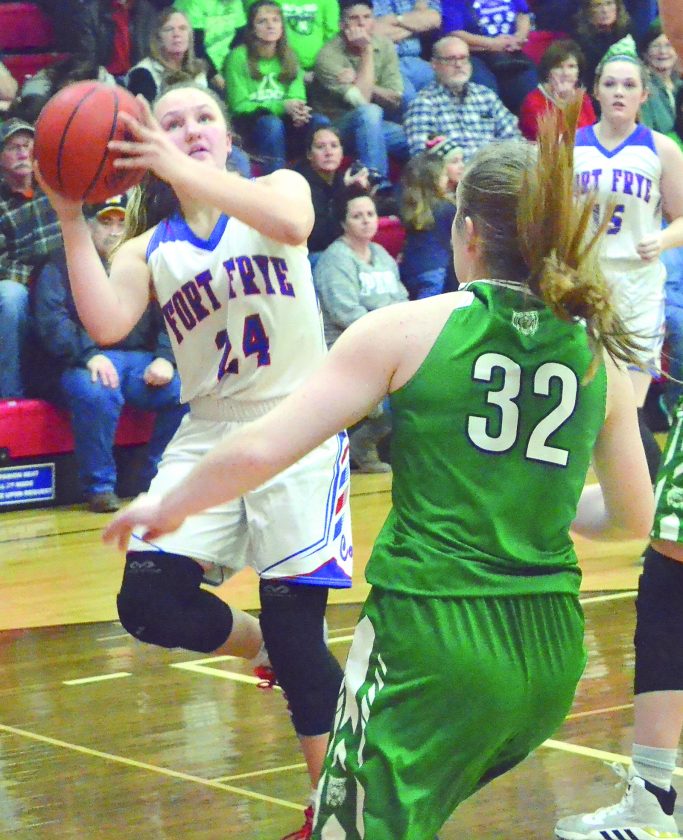 The Cadets drained 15 triples and had eight deuces en route to a 67-20 triumph over visiting Waterford High in a rivalry girls basketball game Monday senior night.

“We’re playing locked-in right now,” said FFHS head coach Dan Liedtke. “We have the shooters, and we have the drivers. And, we’re playing good defense.

“This team is very battle-tested, and we’ve come out of the regular season very well. We’re ready to hit the tournament trail.”

Fort, No. 15-ranked in the Feb. 11 AP State Poll with an 18-2 record, was paced by Hannah Archer’s 15 points on five trifectas. The sophomore sharpshooter was one of four Cadets, who scored in double digits.

All five FFHS starters had at least one triple.

Waterford (13-9) was led by Mackenzie Suprano’s 10 points. Riley Schweikert added six markers. The Wildcats lost both of their scheduled games against Fort Frye this winter.

Defensively, Fort blanked Waterford, 20-0, in the opening period. Leading the charge, Huck scored eight points. During the first eight minutes of action, the Wildcats were 0-8 from the floor with seven turnovers.

At the 6:31 mark of the second quarter, Waterford non-starter Lilly Franchino got the Cats on the board with a bucket. Before the stanza was over, Suprano tallied seven points.

But Archer was red hot as she knocked down three triples, and the Cadets went into the locker room with a commanding 35-9 halftime advantage.

In the third quarter, the rout resumed as Fort outpointed WHS, 17-4, and led 52-13 going into the final period. The Cadets won going away in the last eight minutes of play.

“We’ve been practicing well,” Liedtke said. “And the way the girls are looking right now, I told our coaches that we’re really ready to play anybody right now.”

Top-seeded Fort Frye is scheduled to tip off sectional tourney play against No. 17 Newcomerstown at 7 p.m. Thursday at Cadet Gymnasium.

Seventh-seeded Waterford is slated to face No. 2 Peebles in a district semi at noon Saturday at Jackson High.