Brooke Kurucz builds on to her legacy 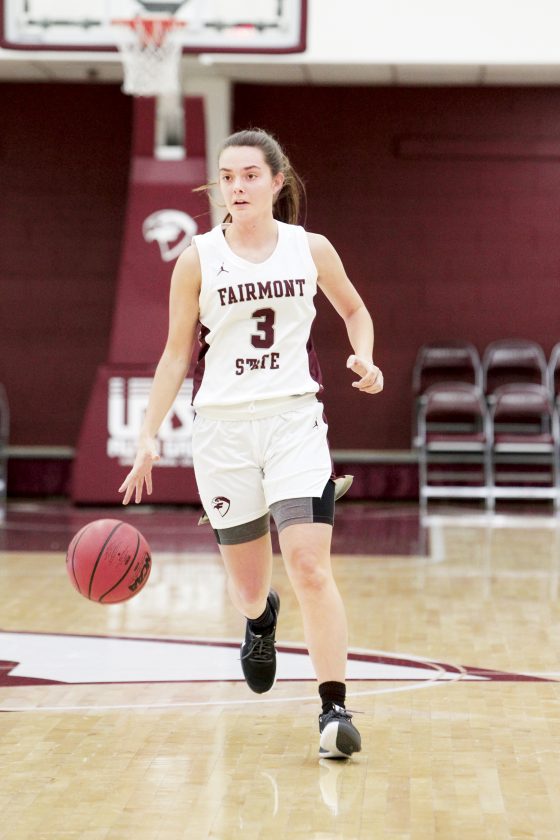 Parkersburg native Brooke Kurucz brings the ball up the floor during a regular-season game for Fairmont Senior. Kurucz continues to add to her basketball legacy post her high school career. Photo provided

FAIRMONT –A legacy of success at Fairmont State is just one of the things that defines Fighting Falcon senior Brooke Kurucz. Kurucz played under Kenny DeMoss at Parkersburg High School, and found enough success to accept a Division I offer from Akron. Following her freshman year, a change of scenery was in order, as she appeared in 13 games for the Zips.

The move to Fairmont State paid dividends for the PHS product, as she found a place for her collegiate playing days to really take off.

Kurucz made an immediate impact for the Fighting Falcons, as she found herself at the top of the team in multiple categories. In earning a starting role at the beginning of her sophomore year, she catapulted herself to new heights over the following three seasons. On Jan. 18, she recorded 16 points in a 71-66 win over Wheeling University to reach the 1,000-point milestone.

“I knew it was coming, but it’s not really one of my main priorities,” Kurucz said of reaching 1,000 points in her Fairmont State hoops career. “I didn’t even know the game I hit it. One of my teammates came in (the game) and congratulated me. We got the win, and that was all I cared about.”

The selflessness of the 5-foot-9 senior is a big part of what Fairmont State head coach Stephanie Anderson says makes Kurucz a leader on the court and in the locker room.

“Working with Brooke and it being her senior year has been really special,” Anderson said. “She cares more about the team’s success than her’s. When she was asked about her 1,000th point, she didn’t even know when that was. Her IQ’s really high, and she sees the game a lot slower than most kids do. That helps her be successful in having all three parts of her game.”

In terms of what Kurucz wants to accomplish for the remainder of the year, she mainly wants the team to win a Mountain East Conference championship. An MEC title gives the Fighting Falcons (11-11, 8-8 MEC) an automatic bid to the NCAA Division II women’s basketball tournament, as Kurucz said she wants “the team to go out with a bang.”

When her time on the hardwood is done, she wants to continue her influence on the court as an assistant. Such a role would be fitting for Kurucz, as she mentors younger players and expects the best out of all her teammates. She balances her time playing basketball and her studies in marketing at FSU.

“I’ve actually talked with the coaches here about possibly staying on the staff,” she said. “I’m going to need to stay in basketball somehow, because I’ll miss it too much. I don’t have an exact plan on what’s next. I want to be involved in the sport in some way.”

Kurucz also talked about advice she has for area players who have dreams of playing college basketball, as she advises kids to dig down deep and to not give up on their ultimate goals.

“I think I’ve told people back home this before, but you just always have another level,” she said. “In high school, you think you’re doing all you can do. Just keep pushing. It’s a grind. Keep doing what you have to do, and anyone can get to where I am.”