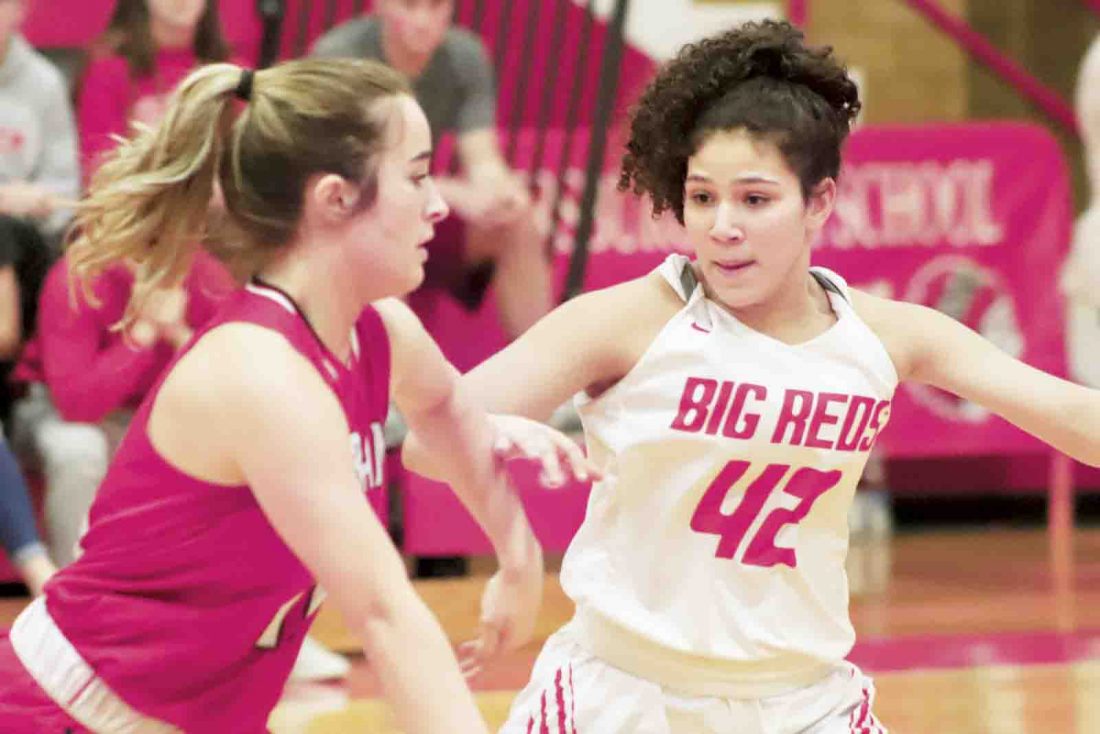 Parkersburg High’s Sierra Mason guards St. Albans’ Kiersten Eggelton during the Big Reds’ 65-46 win over the Red Dragons. Mason has been a part of the most crucial unit for Scott Cozzens group this season as a super-charge bench player for the reigning champions. Photo by Joe Albright

There are five big reasons one could point to when asked about the most crucial part of the PHS girls’ basketball team.

Each one accompanied by a pair of state championship rings on their ring finger.

And while the seniors are indeed valuable, once you look down the bench you start counting and don’t stop for a while.

Seven deep. Not quite.

Yes, it may seem like a rather large number for high school, but this is the truth ringing clearer as head coach Scott Cozzens looks at it on a nightly basis.

Then fans and coaches follow the line all the way down and may grow a little worried. Seeing sophomores and freshmen filling out the back end might indeed be a concern, if this wasn’t PHS. Coaching up talented youth is an annual occurrence Cozzens looks forward to. Proof hangs in the form of two state championship numbers attached to the sport’s title count banner inside PHS Memorial Fieldhouse.

Instead of worry, fingers slip into the cookie jar before dinner. Improvement comes every day for the freshman and sophomores as one of the best defenses and its veterans daily suit up against them.

“Everybody’s getting comfortable and they enjoy playing the game together,” said Cozzens.

New discoveries allowing Cozzens options on lineups and game plans on a nightly basis. Small ball, big ball, four perimeter and one post? Yup. All of these are on the menu. “Sometimes they don’t even run set plays. The kids are trusted to do something because they share the ball so well,” said Cozzens.

Also, the Big Reds signature press and trademark physical brand of defense aren’t off the table, either.

Some fans may look at one big concern for down the road.

No, one standout player isn’t scoring massive amounts of points every evening, but the Big Reds don’t need this right now. We will cross that bridge next season. Seniors Bre Wilson, Aleea Crites and Maddi Leggett command the bulk of the scoring duties the rest of this year anyway.

Everyone else’s abilities open up the entire floor. Eliminating the opportunity for opposing double teams. Along with taking one defender’s attention away from any shooter and leading to an easy basket elsewhere on the floor. Matching up against some of the quick trigger shooters on the Big Reds isn’t easy.

“It is hard to key in on any one player. I mean who are you going to take out? We get five (points) here and six there and all of a sudden you have 25 points from six or seven different players,” said Cozzens.

Death by single-digits one could call it. With each young lady providing their own unique means of scoring their points.

Driving to the rim or popping a 3 or jumper are Sierra Mason and Taylor Miller. Hayley McCale, Brilynn Florence, and Kristen Lowers provide more firepower from beyond the arc. While Tatiana Popa and Kisten Roberts battling for put-backs and offensive boards puts even more pressure on many opponents already at a personnel disadvantage.

Guaranteeing rest, while not sacrificing ability, isn’t an absolute commodity for all Class AAA teams. And it provides another reason the bench shines through again on defense. I know I talked about it earlier, but spectators can see something ominous for other teams in the faces of many of the PHS defenders.

During Monday’s win against GW, Mason and Miller smiling at the beginning of a defensive possession was a curious sight.

“They were happy because they knew what they were doing to the other team,” said Cozzens. “No one had done this to GW all year and here we are doing it to them time after time after time. They were wearing the girls out and being relentless. How could you not have fun?”

GW wasn’t the first and likely won’t be the last victim. This depth on both sides and all-around skill of the bench puts PHS as one of the teams to beat in Class AAA.

Does it make them the favorites once again? Well, not exactly. One bad shooting night sending a team home prematurely happens all the time at the Charleston Coliseum and Convention Center.

Afterall, who else in the state can count on a dozen experienced players?