Wright has big game for the Blue Devils 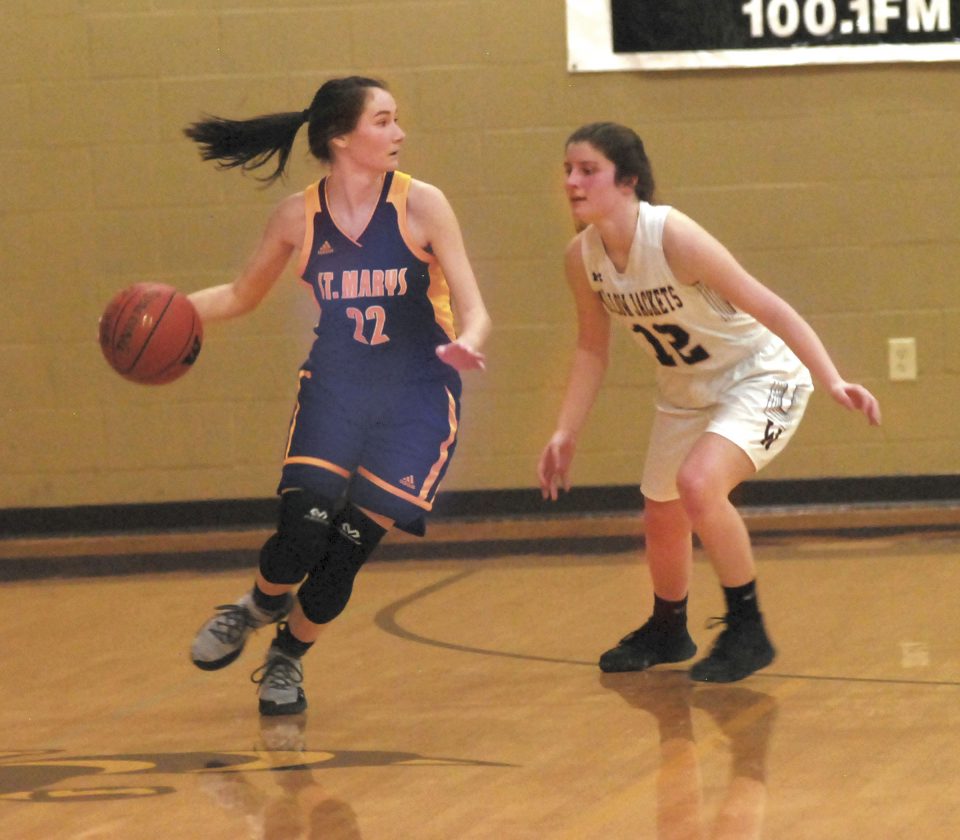 Photo by Josh Hughes St. Marys’ Josey Moore dribbles against Williamstown’s Kayli Sauro during the Blue Devils’ 50-43 win over the Yellowjackets Tuesday evening on the road.

WILLIAMSTOWN — Round two was as tight as the first. Avenging a 59-53 loss from Dec. 30 in St. Marys, the visiting Blue Devils got the job done this time around. The Williamstown Yellowjackets couldn’t string together a comeback, as they were the ones who fell on Tuesday night from the WHS gymnasium, 50-43.

After a tight first quarter of back-and-forth action, the Blue Devils (9-2, 7-2 LKC West) built on their 14-12 lead to keep momentum going in their favor.

Mary Taylor drained a shot from close range off an assist from Kylie Wright (who had a game-high 15 points in the victory) to give SMHS a 23-16 advantage midway through the second. A couple minutes later, the Blue Devils built up their largest lead of the night after Olivia Deweese hit a stepback triple to extend the lead to 28-18. Buckets from Georgie Inman and Nicole Reynolds cut into the deficit for the ‘Jackets (8-5), as the contest was close at the break.

A third period of clutch Williamstown baskets tied the game at 32, as Kayli Sauro dished to Taylor Newton with 1:35 on the clock. Newton fired from beyond the arc and hit the team’s second 3-pointer of the game on a shooter’s bounce to cement the tie. However, St. Marys shut the door on any other Williamstown rally.

A 12-3 run throughout the following five minutes distanced the Devils from their rivals, as Sophie Folwell hit Williamstown’s final field goal for nearly two-and-a-half minutes in the midst of this SMHS run. Josey Moore hit back-to-back shots, and she was joined by Lara Fetty (who knocked down a basket and free throws) in this key stretch.

The Yellowjacket girls ran out of time to mount a final rally, as the closest they got was 46-41 with 50 seconds remaining. That make represented their third of four shots from the floor in the final quarter, as the Blue Devils came up big when it mattered the most.

“It’s been a while. Fred (Sauro) and I talked, and I think there for a while I had a string (of consecutive wins), and now Fred has my number,” St. Marys head coach Howie Meeks said of the back-and-forth nature of the rivalry. “Williamstown plays hard, and it’s always a battle, but they were missing a really good senior (Keely Alsup) with an injury. (Kylie) Wright just got X-rayed on Monday for her ankle. Fortunately for us, she was able to play on it and came up big for us. I’m just really excited for the girls, because it’s been three or four years since we had a win over Williamstown, and it’s been a long time coming.”

The win comes at an opportune time for St. Marys, as it now climbs to second place in the LKC West behind Parkersburg Catholic with the win. They now hit the road on Thursday at 6 p.m. to participate in the WVHIT Tournament against Cameron.

Williamstown dropped its second game in a row, as the team tries to get its groove back. Coach Sauro says that can only be accomplished by the team improving on their missed chances from this game. Ritchie County is their next opponent, and the Thursday night home game gives them a chance to right the ship.

“It was all about our shooting percentage,” Sauro said. “I mean, how many wide-open looks at 3 did we have? Our two best 3-point shooters percentage-wise made one three between them. We have to shoot a lot of them, because we’re so small. Here’s something you’ve got to understand about St. Marys. St. Marys is 9-2, and they lost one game by one point, and we beat them by six. They’re seven points away from being 11-0, so they’re a good team.”