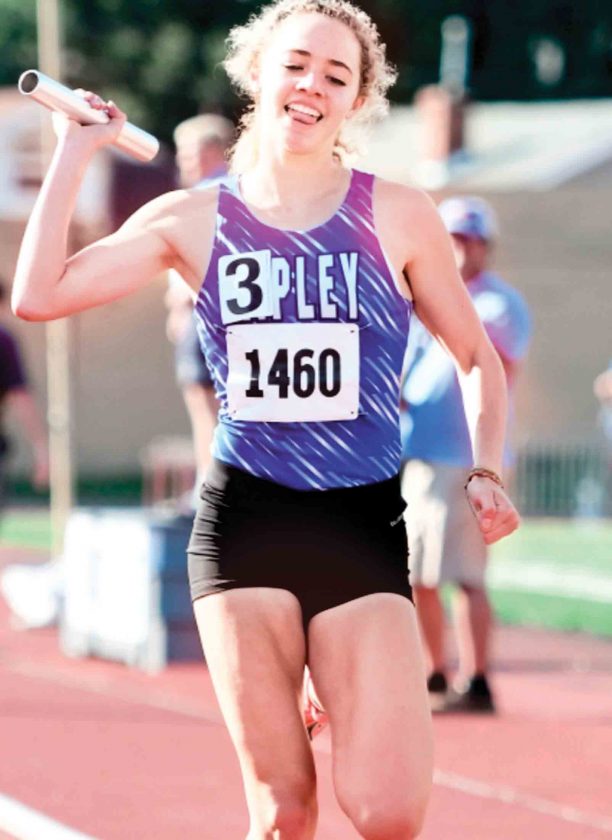 Photo provided Ripley track and field athlete Tori Starcher handles the baton during a relay event at the 2019 Class AAA state tournament. Starcher dominated the track for a second straight season and repeated at the Ray McCoy Female Track Athlete of the Year.

CHARLESTON — As a standout track athlete at Ripley High School, Tori Starcher has stamped her name at the top of three individual events while serving as a vital cog for a relay team that has enjoyed crossing the finish line first.

At the past three three state high school track and field meets, she’s won the 800, 1600 and 3200 meter events in Class AAA. In addition, she’s anchored the winning 4×400 meter relay units all three years.

Last May at Charleston’s UC Stadium, she helped lead her team to state title No. 2 with another phenomenal showing. Ripley placed runner-up her freshman season.

In the offseason, she ended an extensive college recruiting period by signing an NCAA Division 1 national letter-of-intent with Stanford University where she plans to major in biology. She carries a GPA above 4.0.

“When I went there, it was such a beautiful campus. It left a lasting impression. I felt comfortable and felt I fit in there. It had everything I was looking for in a college,” Starcher said.

Now, she has repeated as the winner of the prestigious Ray McCoy Female Track Athlete of the Year Award given by the West Virginia Sports Writers Association. She will be honored at the 74th annual Victory Awards Dinner on May 3 at the Embassy Suites in Charleston.

Placing second and third in the balloting by the WVSWA were Beckley Woodrow Wilson sprinter Mikah Alleyne and Williamstown distance runner Ella Hesson.

“It means so much,” said Starcher after learning she had repeated. “To be a double recipient of the award is truly an honor. To be selected among so many great runners in the state is awesome.”

Starcher, who is presently gearing up for her final prep season as a Viking, would like to continue the team championship success with a third straight crown.

“I think we were all hungry after losing (the state title) by two points (82-80 to Morgantown in 2017),” she said. “During that year the stars had to be aligned, but it didn’t happen.”

The following year (2018), Ripley took the crown as Starcher scored 32 1/2 points for the second straight year.

“We knew what it would take,” she said of the title winning effort as a sophomore. “Not winning the year before motivated us.”

The best was saved for last in the 4×400 relay as Ripley trailed by two points in the team title race entering the final event. After three legs, Ripley owned the lead and Starcher brought the gold, and team title, home with another trifecta, winning the relay with a new meet record time of 4:01.64, breaking the Ripley mark she helped set two years earlier. Other relay members were Allison Fields, who was on the 2017 unit, plus Kyanah Baldwin and Cassidy Miller. Ripley bested Wheeling Park, 82-80, for the team title and the school’s fourth-ever crown.

“That was high for our school, Being able to repeat, it was really special,” Starcher said. “I don’t want to say we expected it but we had put in the work. We didn’t count ourselves out. We just had to accomplish the right amount of points.”

Before her great junior season ended, she gained national attention by winning the high school mile at the 125th annual Penn Relays in Philadelphia. She clocked a meet record 4:38.19 to break the mark of 4:39.28 set by Mary Cain in 2012.

“That was incredible. It’s such a prestigious meet. I wanted to go out and compete with the top girls. It gave me a lot of confidence,” she said.

As for the moment, Starcher, who also won a state cross country title her sophomore year, is preparing for her final track and field season for the Vikings.

“During cross country, I had a stress fracture,” she noted. “I’ve had to take some months off (training) and it was kind of frustrating. I’m starting to get in workout mode. I certainly want to be ready for the more important parts of the season.”

Which, of course, will include her final state meet when she hopes to duplicate her three individual golds plus a relay first place and help the Vikings three-peat as Class AAA champion.