Pioneer men cruise to a W 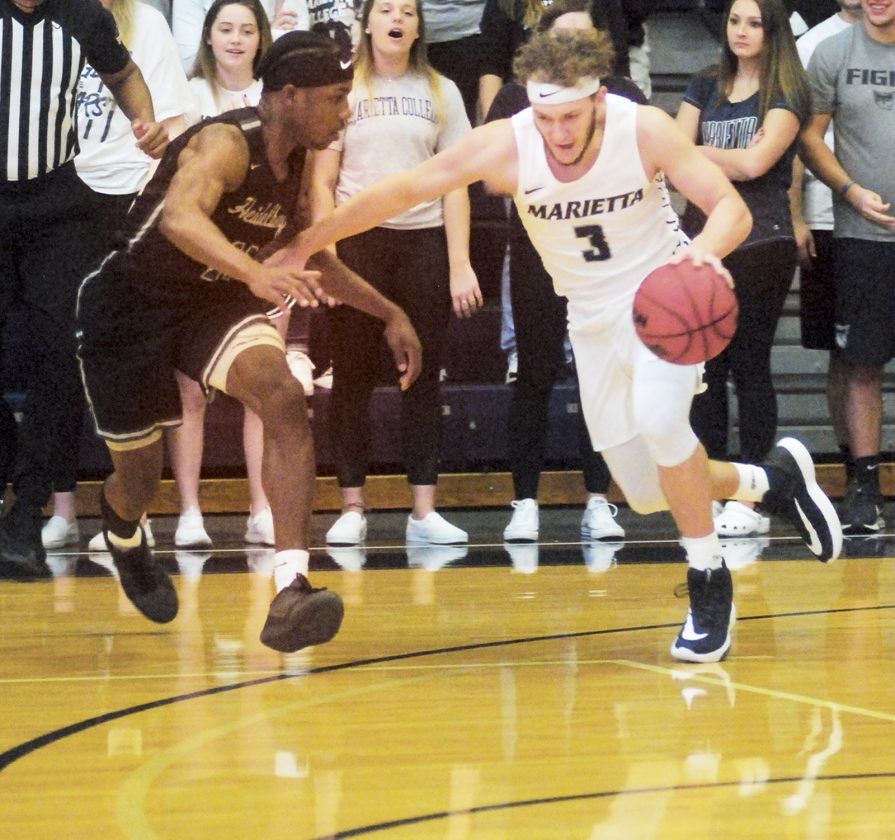 The Pioneer point guards shined on the offensive end to help lift their team to a 96-75 victory over Heidelberg in an Ohio Athletic Conference battle Saturday at Ban Johnson Arena.

James started and scored a game-high 24 points while handing out four assists. Isaly returned to the lineup after missing two games due to injury. Despite playing just nine minutes off the bench, the sophomore finished with 13 points, including seven straight midway through the second half to help Marietta pull away.

“Christian was phenomenal,” said Marietta head coach Jon VanderWal. “I thought he had a great game.

“CJ made the plays today that we know he can make. He’s explosive. He’s hard to guard. He can shoot the 3, but he can also get to the rim. He gets up when he gets around there and it was nice to see him finish some shots around the rim.”

James made his third straight start at the point guard position and went 9 for 17 from the floor.

“I knew I had to step up and that’s just what I did,” said James, a junior. “I had to make plays and get my teammates. (Heidelberg) was crashing and going in hard on them so I was getting open shots. I just had to knock them down.

Two minutes into the contest, James assisted Hall on a 3-pointer that put Marietta up 5-3. The Pioneers never relinquished the lead from there, going up by as many as 10, 33-23, on Kreeger’s two free-throws before taking a 42-33 lead into halftime.

Heidelberg scored four straight points to open the second half and get within five, but James answered with a 3 before Kreeger nailed two more freebies to stretch the lead back to 10, 47-37.

Woods’ jumper with 13:50 remaining cut the lead to five one last time. That’s when Isaly was fouled in the process of nailing a corner 3. He knocked down the foul shot to convert the four-point play, and after Marietta got a defensive stop, Isaly drilled another triple to quickly turn a five-point game into a 12-point game.

Heidelberg, which had hung around all game, never recovered from Isaly’s spurt.

“You look at Lukas Isaly’s statline. He plays nine minutes and gets 13 points,” VanderWal noted. “He had a nice little stretch there where he just kind of went on a run by himself.

“It was a huge key in the game. We were kind of keeping (Heidelberg) at bay, and then he hit those big shots to give us a double-digit lead. We were able to kind of keep that the rest of the way.”

Look for Isaly’s role to continue growing as he gets healthier.

“I don’t think he was at 100%,” VanderWal said. “I think you could kind of tell he wasn’t quite moving the same, but he was still able to make plays.”

The Student Princes, coached by former Marietta assistant Andy Bucheit, missed an opportunity to get within a game of first place in the OAC, falling to 5-8 overall and 3-3 in the league. Marietta is now 12-1 overall and 6-0 in the OAC with a game Wednesday at Capital looming.

“We’ve got a huge target on our back so it’s going to be tough night in and night out,” VanderWal said.

In regards to matching up with Bucheit…

“He’s one of my best friends,” VanderWal said. “I think the world of him. It’s always kind of weird battling against him. He’s a great coach. He gets his kids to play so hard.”