PHS, South girls meet for Round 1 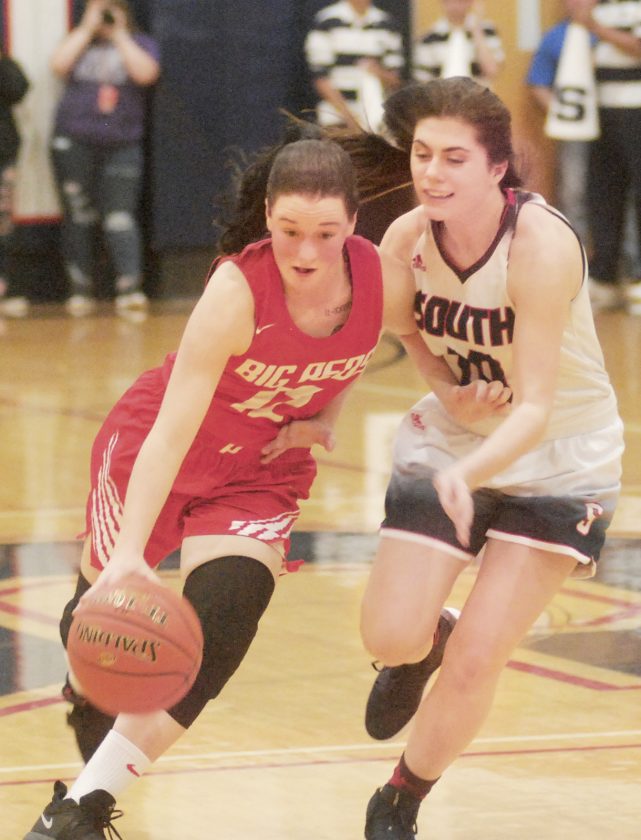 Photo by Joe Albright Parkersburg High’s Maddi Leggett drives past South’s Rylee Harner in a 2018 regular-season game. Leggett and Harner, and their teams, meet this evening.

Photo by Joe Albright Parkersburg South’s Makenna Winans soars in for a shot during a 2019 regular-season loss to Parkersburg Catholic. Winans has been one of the biggest leaders for the Patriots in the early part of the season.

Photo by Joe Albright Parkersburg High’s Maddi Leggett drives past South’s Rylee Harner in a 2018 regular-season game. Leggett and Harner, and their teams, meet this evening.

PARKERSBURG –Maggie Richards never tires of the hype up to any Parkersburg South game. “Not even a little bit,” said the Big Reds’ senior forward. “Gameday is just as exciting, too.”

This year is no different for her or for PHS.

The Big Reds can build their first winning streak inside the Rod Oldham Athletic Center in 18 years at 7 p.m. today.

PHS also brings a little momentum after a 60-49 road win over then-Class AAA No. 5 Huntington six days ago on the road.

What fans shouldn’t expect is for either team to dwell on what happened in the last meeting between these two teams. PHS sending South to the worst loss in the history of the series in a 2018 Class AAA Region IV, Section 1 final last February at PHS Fieldhouse is in the past. 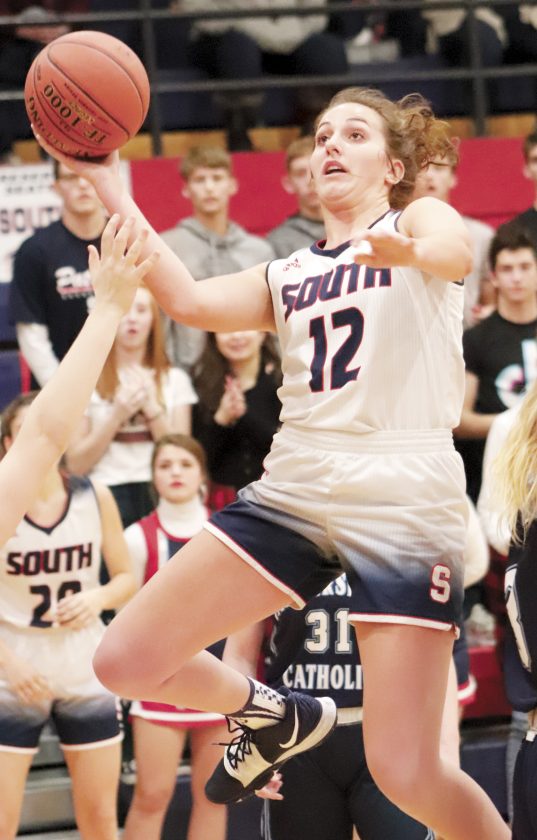 Photo by Joe Albright Parkersburg South’s Makenna Winans soars in for a shot during a 2019 regular-season loss to Parkersburg Catholic. Winans has been one of the biggest leaders for the Patriots in the early part of the season.

“Honestly, I am not really worried about it,” said the Patriots’ new school record holder for 3-pointers made in a game Erin Williams.

“It is a completely different game than last season,” added Richards. “We are still going to come into it the same exact way as any other contest.”

The two-time defending state champions (7-5) face a Patriot group hard to solve in the first half of the season.

First-year head coach Rick Dobson’s Patriots are 2-7, but recently conquered then-Class AAA No. 8 University last Tuesday, then lost to Logan (Ohio) on Saturday. The Patriots average margin of defeat in their losses is 7.4 points per game.

“We just have to go play and feel it out as we go,” said PHS assistant coach Phil Wilson on how to prepare for an up-and-down opponent. “Each team is different and can be different day to day. We adjust and attack accordingly.”

One of those adjustments includes the introduction of 6-foot-5 IMG Academy transfer Tatiana Popa to the rivarly. “I know she is excited and we are excited, it has been a while since she played a real game,” said Wilson. “We will get her out there and see what she can do.”

What Dobson and company need to do should be similar to their performance against the Hawks. Multiple double-digit scoring efforts would help offset a Big Reds’ defense allowing just 47.7 points to in-state teams this season. PHS also has lost to just one Class AAA team the past two seasons. Wheeling Park defeated the Big Reds, 50-49, back on Dec. 11.

“They are a good team obviously and they have a good program with a good coaching staff. Our girls are going to play hard and we want to get in there and mix it up,” said the Patriot head man. “We are going to take it possession by possession and we don’t care if it is the Big Reds or Logan we are going to play out game and make adjustments as needed. We know we can be as good as anybody.”

Tonight’s game also marks the first time Dobson stands on the sideline as a rival after his time as Parkersburg High’s Athletic Director. Where he once got wrapped around the axle of the rivalry, he won’t be this evening.

“It is all about the kids,” said Dobson. “When I was at PHS I was there to help the kids, now that I am at South I am here to help the kids. You don’t look at it any differently as a coach. Do I want to win? Of course I do, but I am not letting that get in between what we need to do.”

Williams agrees with her coach.