Marietta girls run past the Colts 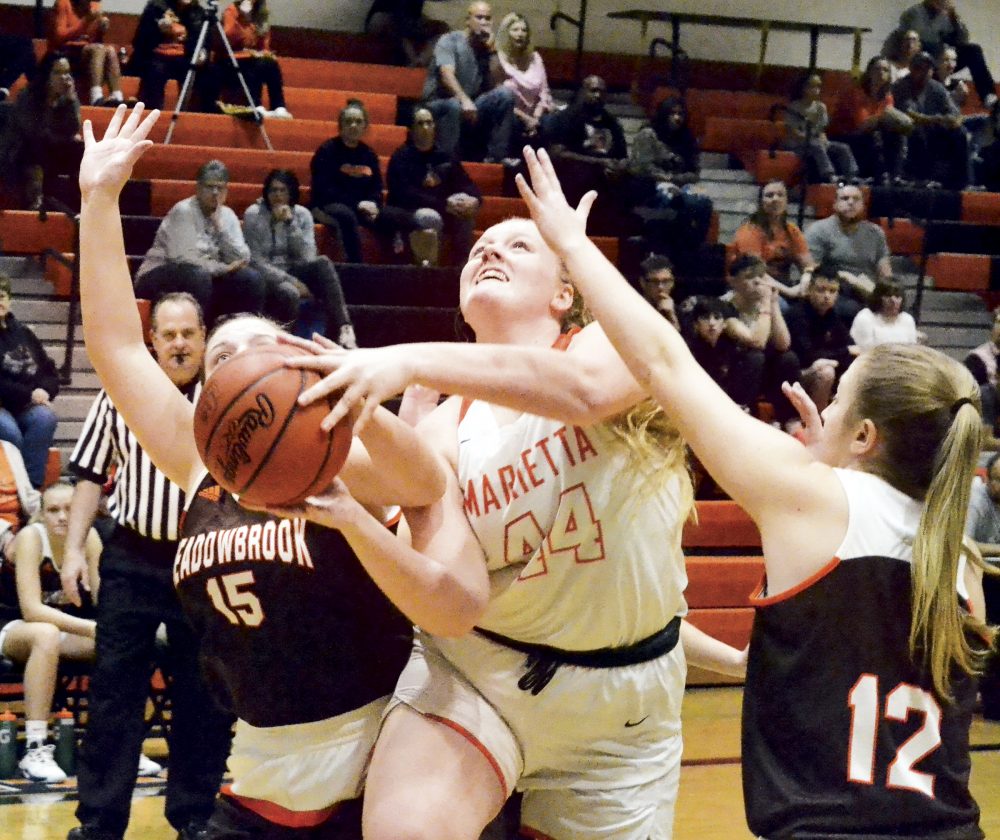 Photo by Ron Johnston Marietta’s Hannah Kroft cuts between two Meadowbrook defenders on her way to the basket. Kroft netted 14 points in the Tigers’ 72-20 defeat of Meadowbrook Saturday at Sutton Gymnasium.

Earlier in the season at Byesville in November, the Tigers defeated the Colts by 50 points (85-35).

“We wanted to be laser-focused and to come out and play our game,” said MHS head coach Allen Ruth. “I was really proud of them. They came out, executed, and did the things we needed to do. I was really pleased with the girls today.”

“When the Smiths are playing together, they’re a tough tamden to get by,” Ruth said. “They’re both really athletic and play really good defense.”

Marietta improved its record to 10-4 overall while Meadowbrook fell to 1-12.

The Colts were led by Lynsey Dudley’s 13 points.

Marietta, for all intents and purposes, had the game won in the first quarter when it blanked Meadowbrook, 36-0. During the surge, Jennifer Smith tallied 11 points, Kroft eight, Jessica Smith eight, and Hill six.

The Colts hurt themselves with 10 first-quarter turnovers and 29 for the game.

In the second quarter, Meadowbrook got on the board at the 7:17 mark when Dudley converted 1 of 2 at the line. Dudley than scored the Colts’ first field goal of the contest around the 5:48 mark.

But the Tigers were rolling, and sparked by Hill’s two second-quarter trifectas, they led 50-5 at halftime.

After the break, the rout resumed, and Ruth subbed freely. With the Tigers reserves on the floor, the Colts outpointed the home team in the final period, 12-3.

Marietta is scheduled to play at New Philadelphia in an ECOL game at 7:30 p.m. Wednesday. Back in early December during the first meeting between the two schools, the Quakers downed the Tigers, 66-39, at Sutton Gym.

“We’re both tied for first in the ECOL,” Ruth said. “It’s going to be a big game, and we’re looking forward to it.”