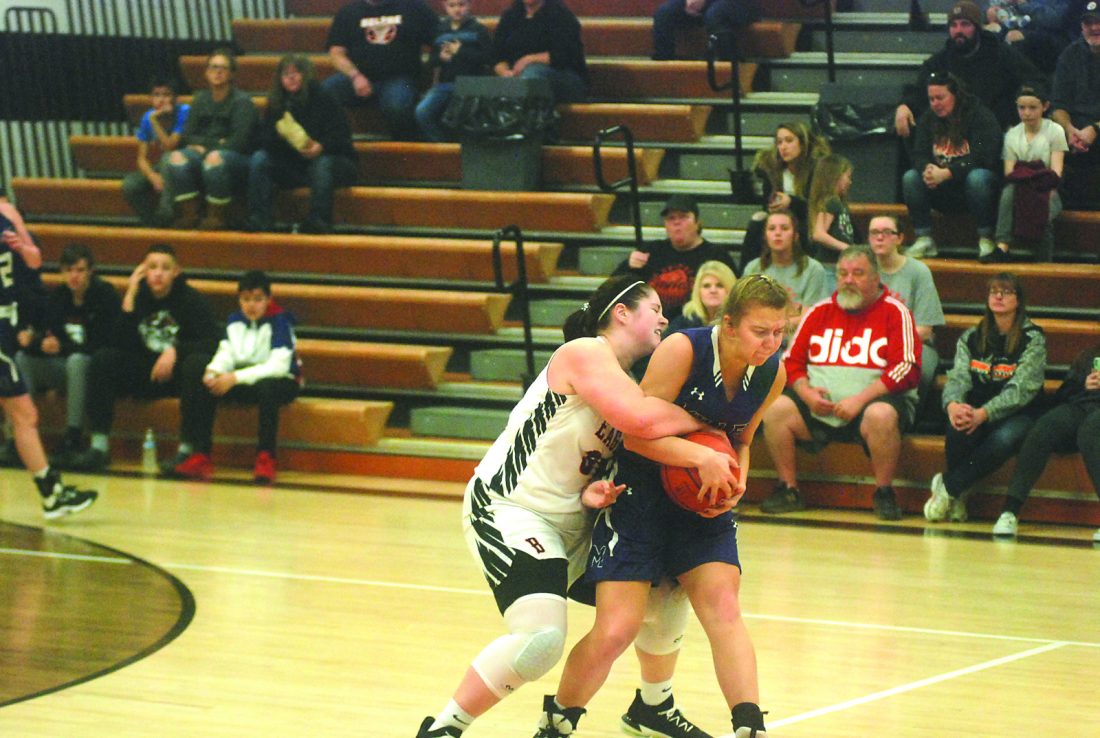 BELPRE — Miller scored the first seven points of the contest and had a chance to win at the end of regulation, but Belpre freshman Kaitlen Bush’s kissed-in runner with 31.8 seconds to play proved to be the game-winner Saturday afternoon as the Golden Eagles turned back the Falcons, 38-37, in a Tri-Valley Conference Hocking Division tilt.

Kyna Waderker, who had a game-high 14 points to go along with six rebounds, made 1 of 2 from the foul line with 57.4 to go. Following a Bush defensive board, she raced coast-to-coast and got the runner to fall. Miller, which plays host to Wahama on Thursday, got a good look from Hallie Joseph inside, but it didn’t go in.

However, Josie Crabtree (nine points) was fouled on the putback attempt, but she couldn’t get either charity stripe toss to fall with 0.2 seconds remaining as the Golden Eagles avenged a 41-38 setback on Dec. 9 at Miller.

“We were able to return the favor,” said BHS head man Chris Murray. “Miller is not a bad team and they’ve played a good schedule. Their 3-2 zone really disrupted our flow and they matched up well out of it. We missed some shots early and there in the third quarter I thought we were going to break away.

“Really, credit to them. They stayed in it and we made some silly mistakes. For our senior class and Miller’s senior class, they’ve probably played each other 50 times since fourth grade. They both really want these games. They get up for us and we get up for them.”

“That’s something a player has to convert and today we just didn’t shoot well from there,” Murray said of the foul line struggles. “I thought Kyna was excellent today. She kept playing hard.

“Kaitlen did a really good job. When they missed that shot and she got that rebound I knew she was going. I thought our defensive intensity was really good.”

Spencer followed Crabtree’s game-opening basket with a field goal of her own and then banked in a 3 for the 7-0 cushion.

A deuce by Halee Williams and a Waderker triple helped Belpre close to 7-6 after one.

Bush, who had 10 points and joined Waderker with a block, assisted on Curstin Giffin’s basket at 3:47 of the second to give the hosts their first cushion at 11-9.

A three-point play by Waderker and a Bush triple helped coach Murray’s squad to an 18-15 halftime advantage.

McFann opened the second half with a 3 from the top of the key thanks to a Crabtree dime to tie it, but the Golden Eagles scored eight straight. Williams started it with a hook shot, Giffin hit a 3 from an Abbey LaFatch assist and then Kyanna Ray knocked one down from deep.

A pair of field goals by Alaina Boyden kept Miller within striking distance. Despite leading 30-22,

Belpre’s cushion was trimmed to 31-29 entering the fourth as Crabtree and Joseph made two free throws each and Spencer had a 3.

The Golden Eagles (12-3, 8-3), who play Thursday at Federal Hocking, had ample time at the end of the third, but failed to get off a shot. Williams had a team-high nine rebounds and finished with six points.

McFann added game-highs of four steals and three assists to go with her seven points.

Boyden had six points and five rebounds while Joseph pulled down a game-high 11 caroms to go with her four markers.