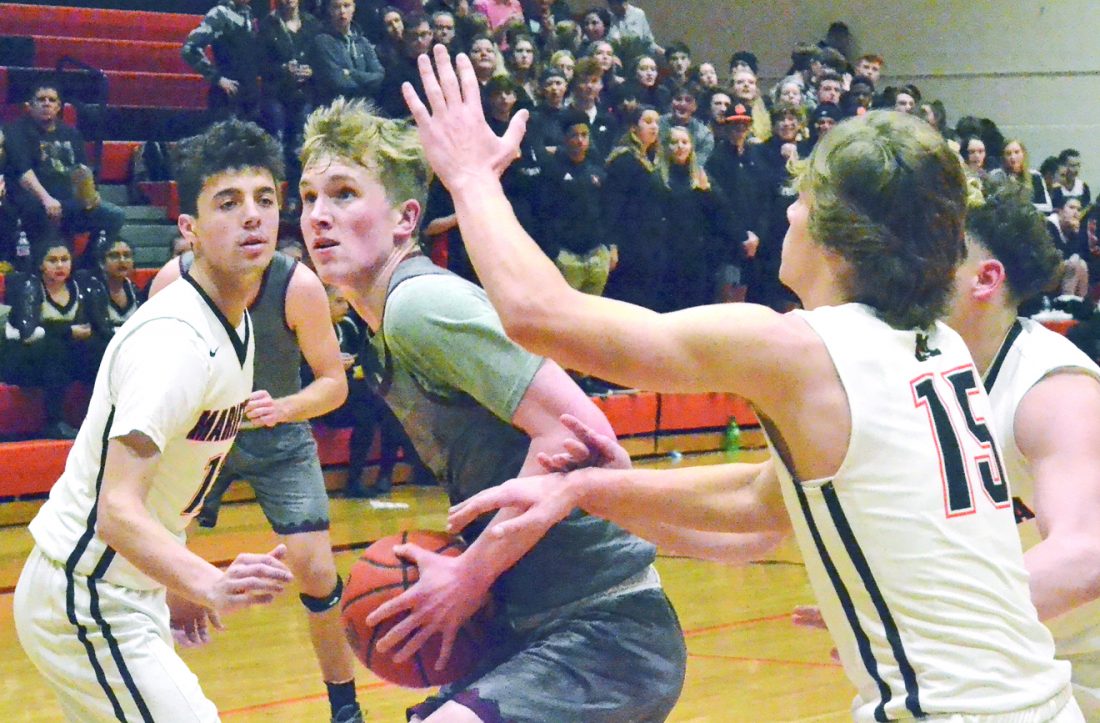 MARIETTA — Sam Cremeans had no idea that he was closing in on a milestone.

“I didn’t even realize it,” said Cremeans, who shared team-high scoring honors with Peyton Amrine with 18 markers. “It was crazy when Coach (Scott Sauro) told me.”

Cremeans, a Wood County Christian School transfer, gave all the credit to his Yellowjacket teammates.

“I owe it all to them,” he said, “for giving me open looks by finding me in the corner or wherever it may be.”

WHS, top-ranked in W.Va. Class A with a 12-0 record, never trailed in the contest. Eli Inman and Xavier Caruthers added nine and seven points, respectively, for the maroon and gold winners.

“It feels good (being 12-0),” said Sauro. “We don’t really talk about being undefeated. We really don’t. We just want to win and try to take it one game at a time, and these guys so far have done that.”

“When we were winning, we were shooting the ball really well, and we were able to give ourselves an early cushion in games,” said MHS boss J.D. Secrest. “This week with Warren, Dover, and Williamstown tonight, the opposite happened, and they came out and hit shots.”

“We’re just struggling to shoot right now,” Secrest said. “And our opponents aren’t. That’s frustrating for the kids and us.”

Sparked by Cremeans’ eight first-quarter points, WHS staked itself to a 16-6 advantage.

“Williamstown was probably the toughest matchup for us, because of their size and their reach,” Secrest said. “They extended that zone, and it was tough for our guys early on to get into a position to score. We didn’t adjust real well.”

Early in the second quarter, Cremeans drained his third 3 of the game to give the Yellowjackets a 21-8 lead.

“It’s a nice accomplishment, and I think Sam would be the first to tell you that it’s a team thing when that happens,” Sauro said. “It’s guys setting screens for him, and it’s guys getting the ball in the right place.

Cremeans added another triple late in the stanza while Amrine and Colton Luther tallied five and four points, respectively.

In the third quarter, Inman had the hot hand, scoring six points as Williamstown stretched its lead to 47-28. Duckworth had a good quarter for the Tigers with five points.

Early in the fourth quarter, Inman buried a 3 to give WHS a 20-point bulge (50-30). Sparked by Duckworth’s 10 points, the Tigers enjoyed a 29-point period. But it proved to be too little, too late.

Said Sauro, “Marietta’s schedule is very difficult by the way. So, we were happy to jump out to that lead, and I thought we did some good things in the second half.”