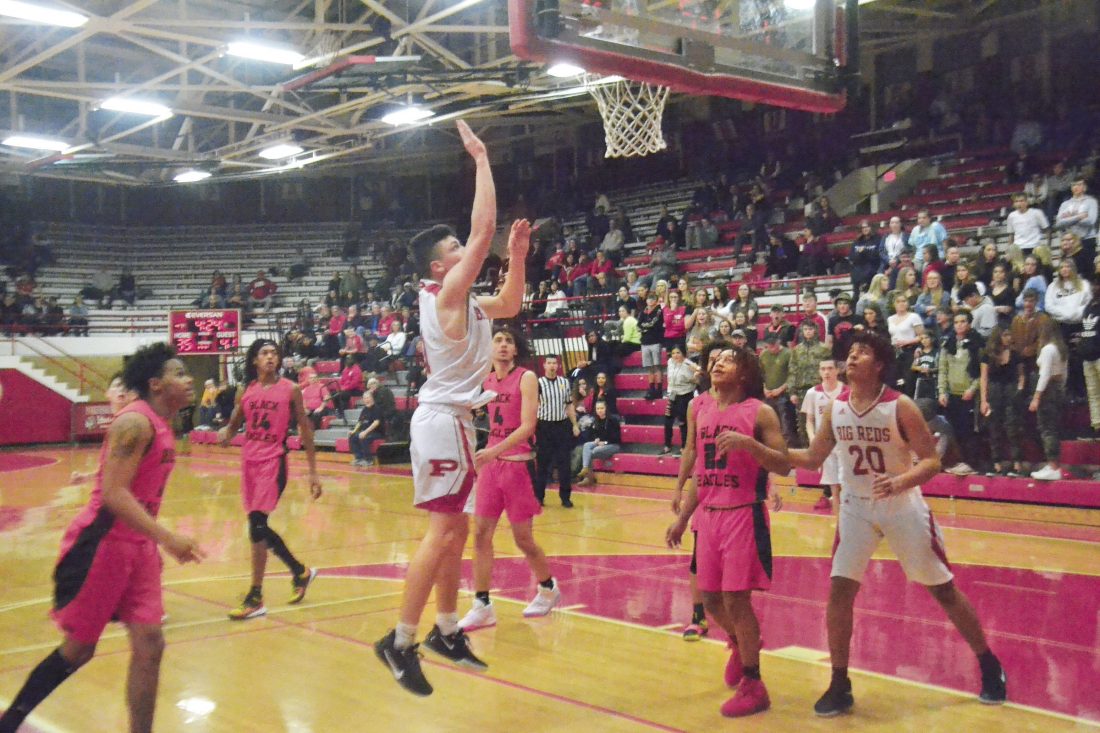 Photo by Tyler Bennett Parkersburg’s Bryson Singer goes up for a putback following a rebound during the Big Reds’ 64-60 upset of No. 10 South Charleston Tuesday night at PHS Memorial Fieldhouse.

PARKERSBURG — Bringing a two-game losing streak into Tuesday night’s contest, the Parkersburg Big Reds needed a win to get their season back on track and that’s what the Big Reds did.

Playing four tightly contested quarters with the triple-A No. 10 South Charleston Black Eagles, the Big Reds came back from down two points in the final three minutes to score six unanswered points and gave a strong defensive performance on the Black Eagles’ final possession to pull out the 64-60 upset win inside the PHS Memorial Fieldhouse.

“I’m so proud of the kids because of every game like this if we get behind, we kind of fold. We just haven’t executed in the end. The kids made plays, the kids finally stepped up and we made the plays to win the game,” Parkersburg head coach Bryan Crislip said. “We weren’t surviving tonight. They made plays at the end of the game. Everyone who stepped in did a good job. Potts was sick, he did a good job. (Austin) Flemming gave me three good minutes in the fourth. That’s why I told them when you get an opportunity, make the most of it and again, anybody who got in did a great job and I’m just so proud right now, so proud.”

Down by six with a mid-range jumper by Shauq Brown in the opening possession of the final period, senior Sam Potts immediately started cutting into the deficit.

Responding with a three-point play and later went 2 for 2 at the charity stripe to make it a one-score game at 6:42.

The Black Eagles responded however with DJ Johnson going strong at the rim to make it 54-51.

Making most of his minutes coming off the bench, freshman Flemming provided a spark, getting two points off a rebound and even came away with a steal.

Fellow freshman Aiden Vega gave the Big Reds their first lead since the second quarter to make the score 55-54 with 4:15 left to play.

A 3 by Potts pushed the lead to three, but a three-point play by Johnson knotted it up once again and the Black Eagles later took the lead for the final time off a jumper by Quay Sutton with less than three minutes left.

Now tied at 60-all with Vega once again getting to the rim for two, Vega, drawing a double-team at the corner baseline near the Big Reds’ bench, found a cutting junior Carson Dennis in the paint for the easy lay-in to hand the Big Reds the lead, a lead they never gave up.

South Charleston had an opportunity to take the lead, but Vega blocked Sutton’s shot from behind the range and Bradley Jones missed a 3 allowed the Big Reds to pull out the 64-60 win Sophomore Bryson Signer drilled both free-throws with 13 seconds left to lock it down.

Both coming in the top five in points scored in the MSAC, Potts and Sutton did not disappoint the crowd in attendance with their scoring abilities. Potts had a game-high 21 points and Brown had 19.

After only scoring one bucket in the first, Potts was able find his rhythm from the floor to score 19 points in the final three periods of play. He also pulled down 11 boards for a double-double and had three assists in the win. Senior Noah Umpleby finished with 11 points, nine of those coming on three triples, while Singer had eight points and six rebounds off the bench.

The Big Reds return to action on Thursday to host Hurricane and rivals Parkersburg South on Saturday.

“I’m going to watch film and get prepared for them (Hurricane). We had six games in 11 days, so not a whole lot of practice and our kids need it,” Crislip said. “I keep saying we are young, they need to experience it on the court. So it is good for us. Hurricane is always going to play hard. So it’s going to be a good battle and hopefully, the kids aren’t too high from this win. But I want them to enjoy it, and I’m proud of them right now.”