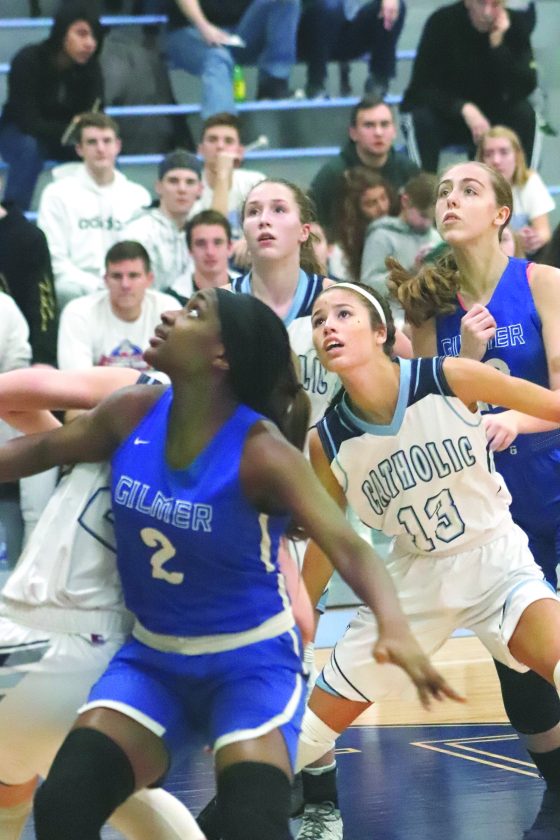 Amy Chapman’s group played an aggressive style Coach V and his group would be glad to see once the state tournament rolls around in March.

Gilmer’s circle around this game also meant the Crusaderettes were in for a battle. Chapman’s team was excited to figure out were they stood in Class A.

Two girls fouled out and Gilmer battled all evening despite the Crusaderettes’ lopsided 74-32 victory. Even once the game got out of hand, Gilmer kept the pressure on PCHS.

Catholic scored the first six points of the game before Gilmer could answer. Buckets from Brunny and Boice netted Catholic an early 4-0 lead. Two of Leslie Huffman’s free throws then built a 6-0 advantage which caused a Gilmer County 30 second timeout. Trinity Bancroft’s jumper out of a timeout finally got Gilmer on the board. Brunny responded with a triple and Catholic’s defense then clamped down at 9-2.

The Titans scored just 15 points the rest of the opening half.

Catholic’s offense then pounced with a game-changing run. Laine Ross’ deuce of a Madeline Huffman assist with 3:37 left in the first kicked off a 31-7 run to halftime.

Turnovers made up a large amount of the opportunities. Gilmer gave the ball away 15 times in the span.

“They are just really good defensively and they live off turning teams over and they do a good job at it. They got at us and my kids are going to just have to do better and learn to accept the pressure better,” said Chapman.

Chances for the Titans to make an attempt at an upset were limited by their 30 attempted field goals. Chapman’s crew converted just 5 of 17 shots in the second half.

Shooting ended up the only complaint Vierheller brought in his post-game press conference. The Crusaderettes shot just 25 of 66 from the field and missed 19 of their 39 free throws.

“This was certainly not our best night in shooting the basketball, but I didn’t think our execution on the offensive end was bad. I thought the stuff we tried to run we ran. We ran a lot of motion stuff, but execution wise we were okay. But we missed a lot of layups and free throws and it isn’t because we don’t shoot them, we do shoot them,” said Vierheller.

“We also really only showed them a couple things defensively which I was really pleased about because we might see them again.”

Despite the tough play there was only a single injury on the floor.

Leslie Huffman took a hard screen to the knee and left the floor in tears. There was no further information following the game.

Catholic now has one day off before a visit from Notre Dame at 7 p.m. Wednesday. Meanwhile, Gilmer County hosts LKC East opponent Clay County at 7 p.m. Friday in Glenville.