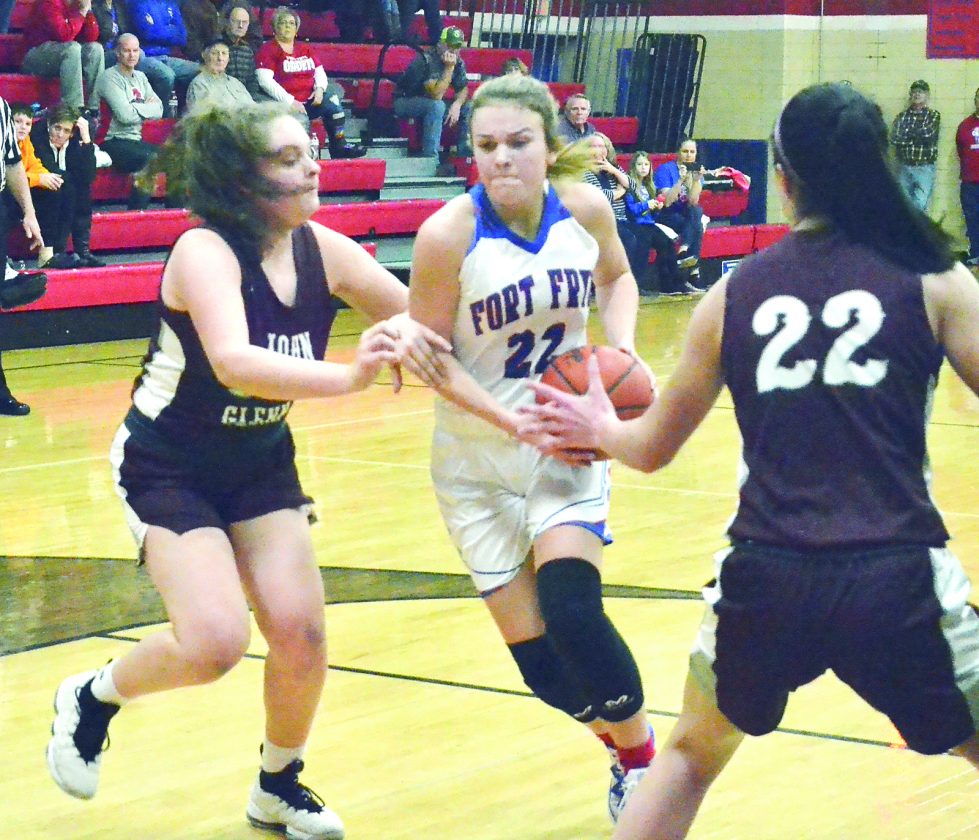 With that 8-minute blanking, the Cadets rolled to 42-17 triumph over the visiting Muskies in prep girls basketball action Monday night.

“The defense has got to be there,” said FFHS head coach Dan Liedtke, “because our shooting wasn’t really on for us tonight. But our defense scored a lot of points.”

The Muskies finished the game with as many turnovers as shot attempts (25). They also took only one shot (and missed) in the final period.

“That’s how we had to make the difference,” Liedtke said. “If we’re not creating turnovers, this would’ve been a ballgame right here — because we weren’t hitting shots.

“So trying to keep them (Muskies) from having any scoring opportunities was a key thing in a game like this.”

After the opening tip-off, the Cadets scored first on a bucket by Kenzie Dalton. JG answered with a 5-0 run on a triple by Buchtel and two freebies by Abrams.

Fort came back and cut it to one on a Riley Medley deuce and tied the score when Archer converted one of two from the line.

Just before the end of the first quarter, Schneider’s layup gave the Cadets a 7-5 lead.

In the second quarter, Fort Frye outpointed John Glenn, 18-8, and never looked back. Highlighting the surge, Archer scored eight points on two 3s and a couple of freebies while Schneider had a triple and deuce.

The third quarter was low scoring with Schneider scoring on a putback; Lexie Huck, on a layup; and Archer on a corner shot. The Muskies countered with four points on buckets by Kumler and Gillespie — JG’s only points as it turned out in the second half.

While keeping John Glenn off the scoreboard in the fourth, the Cadets added 11 more points to their total to win going away. Coming off the bench to score five points in the period was Karlee Ross.

Fort Frye is scheduled to host Caldwell at 7:30 p.m. Thursday.