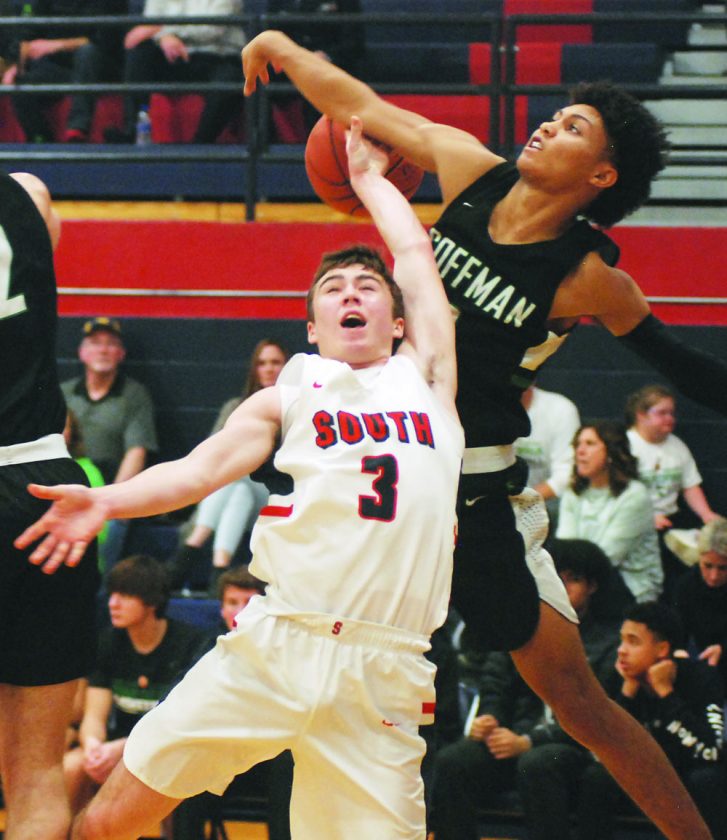 Photo by Jay W. Bennett Parkersburg South sophomore Ashton Mooney, who moments before was whistled for traveling, has the ball swatted away by Dublin Coffman’s Jesse Hains during Saturday night’s game at Rod Oldham Athletic Center.

PARKERSBURG –Games down the stretch of the season are usually filled with dramatic moments, but game two of the Brett Rector era spared no expense. In Parkersburg South’s 58-46 Saturday night win over the Dublin Coffman Shamrocks at the Rod Oldham Athletic Center, key moments and clutch shots defined the evening.

The Patriots hit their free throws late to seel the victory and expand the lead, but it took a big effort from the home team to get to that point. Early on, it appeared the Patriots would pull away after Alex Woolard added a basket off an assist from Ashton Mooney to make it 23-12 midway through the second quarter. However, Jesse Hains got the Shamrocks back in the contest with three consecutive makes. A couple DCHS free throws closed the gap to make it 23-20 at the half, and it was clear this game was going to be a fight to the very end.

The first deficit of the Rector era came with 4:25 to go in the third, as Hains scored off the fastbreak with a layup to make it 29-27.

The back-and-forth nature of this game tested PSHS, and Rector told his players to respond.

“We’ve talked about, since day one, bounce-back and how we handle adversity,” he said. “Tonight, I told them in a timeout, ‘Here it is, guys. It’s hitting you in the face, so how are you going to respond?’, and they did. Nathan Currey, Dylan Day and a plethora of guys had big plays down the stretch after that.”

While Malaki Sylvia took his game-high 18 points and seven rebounds to lead the way in the box score, he was accompanied by teammates who added just as much of an impact. Speaking of Currey, his run in the final frame secured a lead his team would not surrender.

A layup with 7:25 remaining tied the ballgame at 35, but he wasn’t done. Off a feed from Woolard, Currey knocked down an and-1 basket to re-tie the game at 37. One made Dublin Coffman free throw gave the visiting team its final lead as Jake Hogsett found Currey on the perimeter to sink a 3-ball with 6:27 left. A couple key rebounds and two more points off free throws capped off his big game, as he got hot at the right time. Nine of his 12 points came in the final period of play.

“We just had to stay positive. We gave up a little bit of a run there at the end of the first half, but we knew if we just played our game, we would come out with the victory,” Currey said. “I was feeling really good. I’ve got to give all the credit to my teammates for giving me the ball when I was open. We have a lot of heart and a lot of fight in us. It’s going to be scary the rest of the year.”

After Currey’s triple made it 40-38, a 3-pointer from Sylvia and consecutive baskets from Day helped the Patriots pull away.From there, they hit 11 of 12 free throws to end the night on a high note. Now that the unbeaten Patriots dispatched of Dublin Coffman (3-1), they have more than a week to prepare for another Ohio school. They go on the road to face the Fort Frye Cadets at 7:30 p.m. on Monday, Dec. 23.