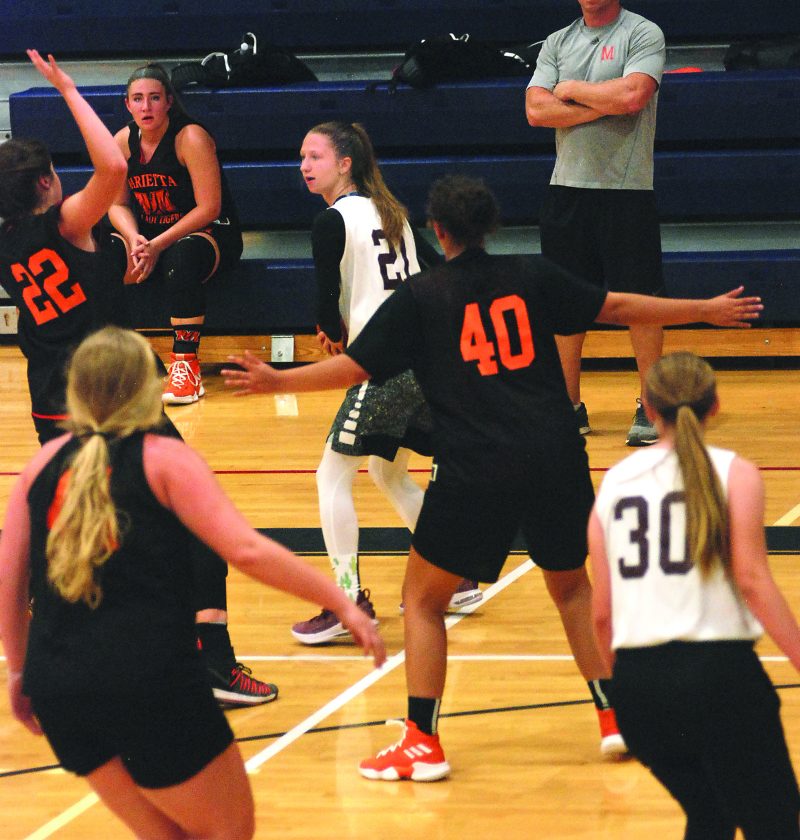 WILLIAMSTOWN — Veteran head coach Fred Sauro is excited for the chance his Williamstown girls will have this weekend when the Yellowjackets compete in the 25th annual Donnie Fenton Shootout, which gets underway at 6 p.m. today with Marietta High taking on Wheeling Central and the hosts tangling with Clay County following.

A season ago, Sauro’s club made the finals but fell 82-52 to the Maroon Knights of head man Penn Kurtz, whose program returns first team all-stater Eden Gainer, second team all-stater Kaylee Reinbeau along with fellow senior Hannah White, who led all scorers with 25 points in last year’s title game.

“I’ve known Fred, obviously, for years being around girls basketball,” said Marietta High head coach Allen Ruth, whose team will carry a 3-3 record into today’s semifinal after besting Cambridge on Wednesday, 78-59, behind big games from Morgan Altenburger (24) and Jessica Smith (20). “He put us against Wheeling Central bless his heart.

“We got after Cambridge a little bit and we’re working on being more physical and finishing four quarters. They are well coached, fundamentally sound and that’s a storied program. It’s a big challenge for us early in the year and I’m looking forward to it.”

Following an 11 a.m. junior varsity tilt on Saturday, the consolation game will tip around 12:45 p.m. with the title game after on a rolling schedule.

Clay County will be seeking its first win after an 0-2 start. Earlier this week in a 49-31 setback at Braxton County, the Panthers were led in scoring by Emilea Holcomb (14) and Brooklyn Burford (10).

“We started it in December of 1995, the first year that girls basketball was played in the winter,” said coach Sauro, whose team rolled past Wirt County during their only game thus far thanks in part to the efforts of Lakyn Joy (13 points), Jayla Wiseman (11 points) and Emily Bailey (nine points, 10 caroms).

“I’ll tell you, we are a very small team. We lost all of our size. We are quicker, a little more athletic and I think we have some good skills and some girls who can shoot it.”

Both the Maroon Knight White and Yellowjacket Keely Alsup are coming off injuries from a season ago.

“She might be our best athlete overall and she can shoot it,” Sauro said of the senior Alsup.

As far as the competition goes this year coach Sauro added, “I know Clay County has some young kids and I heard they are pretty talented. Marietta is a good team even though they’ve played a tough schedule early and Wheeling Central is awesome.

“They (Central) are something and they are good. I think they have a good freshman aside from having Eden, Kaylee and Hannah White, she got hurt (ACL) at our place last year. We know what we are up against.”