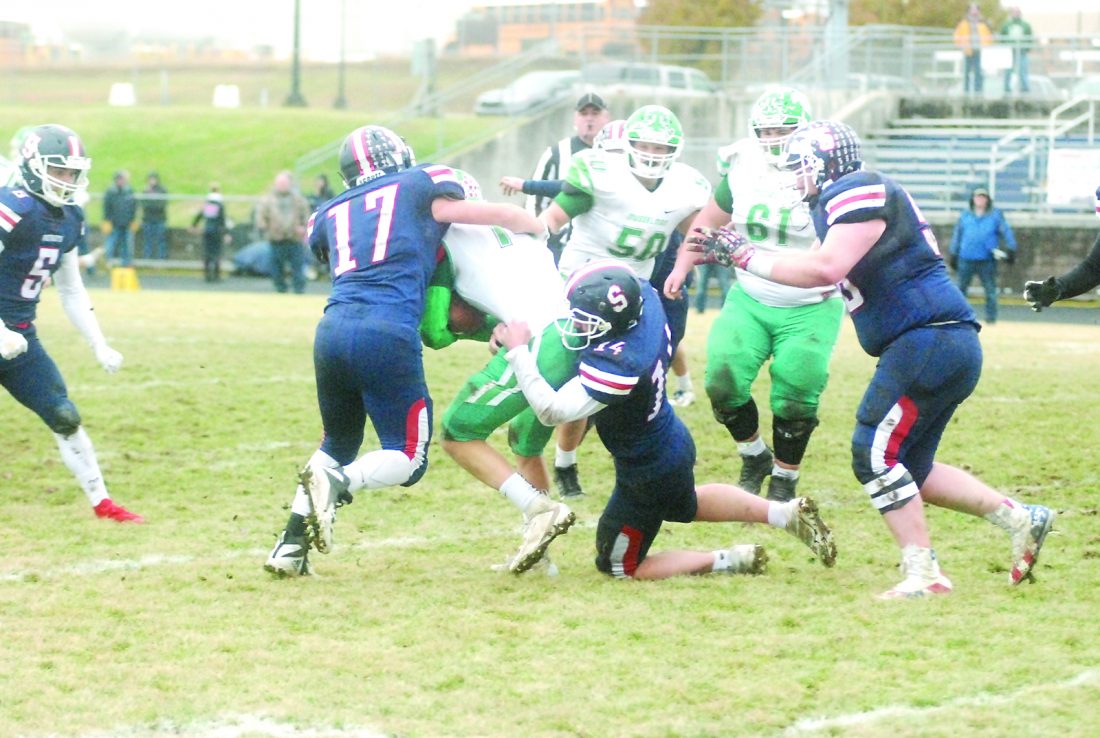 PARKERSBURG — And then, there were four. That’s the position the Parkersburg South Patriots (11-1) find themselves in the Class AAA state football playoffs.

In order to punch its ticket to the state championship game in Wheeling, South has one big obstacle remaining.

That obstacle comes in the form of the undefeated Martinsburg Bulldogs (12-0). The three-time defending champs boast a 54-game winning streak and they haven’t lost a game at Coburn Field since September 12, 2008. On top of that, the Bulldogs have outscored opponents 154-0 in this year’s postseason. The environment on the road represents the toughest test the Patriots have faced all year, but head coach Nate Tanner believes his team can stay in the game, if they don’t give in shortly after the 1:30 p.m. kickoff.

“Just from what I’ve seen on film, there are time’s Martinsburg’s opponents just kind of fold up really early in the game,” he said. “I talked to the kids in practice and told them about the elephant in the room that nobody believes in them. In order for a goal this monumental, like a win this week and a win next week, you have to believe it’s going to get done. If you don’t believe, you have zero chance, so going forward into this game, we have a lot of kids who really believe we can get it done.”

That belief is one aspect of the game the Patriots have used to punch their first semifinal appearance since they won it all in 2003. Coming back to win 52-33 in the Musselman game took key contributions from the skill players used to make it this far. Quarterback Brandon Penn continued sending a message to Kennedy Award voters with 246 yards on the ground and a pair of scores in the win. Additionally, he added a 76-yard interception to the house in the lopsided second half. The second half saw a 35-6 advantage to the Patriots.

The defense also picked up the pace, as they will face a sturdy Martinsburg line. Trey Robinson, Jon Kinnaird, Jeffrey Tucker and Brent Parkhurst all combined for three sacks in the win against Musselman. Braxton Amos led the way in tackles for loss (5), as he was in the backfield quite often. He was also one of three Patriots to force a fumble alongside Sam Schuler and Devin Gaines.

Speaking of Gaines, he rushed for two touchdowns in that win with 79 yards on the day.

The running game is a definite factor in pulling off the upset on the road, but the Bulldogs have weapons all around the field, and Tanner wishes to neutralize as many of them as possible. One such weapon is wide receiver, Jarod Bowie. In last week’s 70-0 dispatching of Spring Mills, Bowie went off for a couple large receptions. When quarterback Elijah Banks launched an 80-yard touchdown to him, that helped make the score 56-0 in the middle of the third quarter. Another way Bowie impacts the contest is his willingness to take the ball on jet sweeps and end-arounds. He further made Spring Mills pay with some sizable runs last week and coach Tanner says Bowie is one of the most gifted athletes he’s seen.

“He plays in the slot. He’s probably the most electric player in the state of West Virginia I’ve seen,” Tanner said of Bowie. “I coached in Virginia for two years, and he ranks as one of the most electric kids I’ve seen on film. When he gets the football, he can really make stuff happen. We’re going to try to make it as uncomfortable as we can for him.”