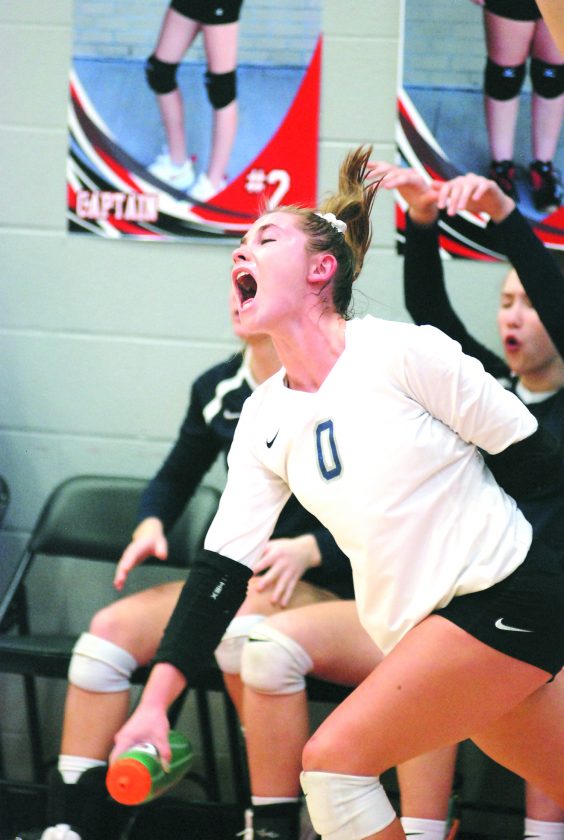 Photo by Jay W. Bennett Parkersburg Catholic senior libero Gracie Lowers shows some emotion from the sideline during Saturday’s regional semifinal victory versus Buffalo. PCHS has the No. 2 seed for this week’s state volleyball tournament and will take on No. 7 seed East Hardy at 1:30 p.m. Friday during the quarterfinals in Charleston.

PARKERSBURG — A year after reaching the Class A state semifinals, Parkersburg Catholic is back in the field for this week’s state volleyball tournament in Charleston.

Head coach Amanda Weatherwax’s squad will open play at 1:30 p.m. Friday as the No. 2 seed against No. 7 seed East Hardy, which lost its regional final to Moorefield in five sets on Saturday.

Parkersburg Catholic enters with a 30-8-1 record as the Cougars come in at 17-19-1. Not only did PCHS win the Little Kanawha Conference championship against Wirt County, but they also bounced back from a sectional loss to the Tigers to defeat the orange and black for the regional crown on Saturday afternoon in Ravenswood.

Middle hitter Aaliyah Brunny led the way in that victory — a tight four setter — with 21 kills.

“We have to keep the energy going and we’ll be fine,” Brunny said of the key to the postseason.

Against Buffalo, the junior led the way with 15 kills, but Lainie Ross also had 13 downed spikes in both matches on Saturday.

The two programs have not met this year and should the locals come out victorious they will take on the winner of No. 3 Paden City and No. 6 Greenbrier West sometime after 8 o’clock on Friday evening.

“We’re hoping so,” Weatherwax said of keeping the wins coming. “We just got to keep pulling together and working hard and keep moving forward one point at a time.”

Returning first team all-state libero Gracie Lowers finished with a pair of aces and 15 digs in the regional final.

She had five aces and 16 digs against the Bison.

“Getting that win and knowing you beat the other team is just an unbelievable feeling,” said Lowers, who added of what it will take to accomplish their goals is “just playing our game because a lot of times we can get down and get in a rut.

“So our main thing is being consistent, limiting the unforced errors and just putting pressure on the other team.”

Late in the match against Wirt County, spiker Paige Stotts suffered a leg injury, but coach said “she’s doing better and got some rest over the weekend.

“It’s looking better and she said she’s feeling better. To make it to the state tournament, you got to be a good team and we faced a lot of good teams on the way there.”

No. 4 Moorefield will face No. 5 Ritchie County at 8:30 a.m. in the first Class A state quarterfinal with No. 1 Wirt County taking on No. 8 Greater Beckley Christian following that match.

“Honestly, just practicing what we can control,” said Weatherwax, who noted she has done some scouting on the Cougars from East Hardy. “I always try to preach to the girls it doesn’t matter what’s going on on the other side of the net.

“If you are under control on yours, that’s very important. So if we take care of things on our side and play our game I have confidence that we’ll keep them (wins) coming.”