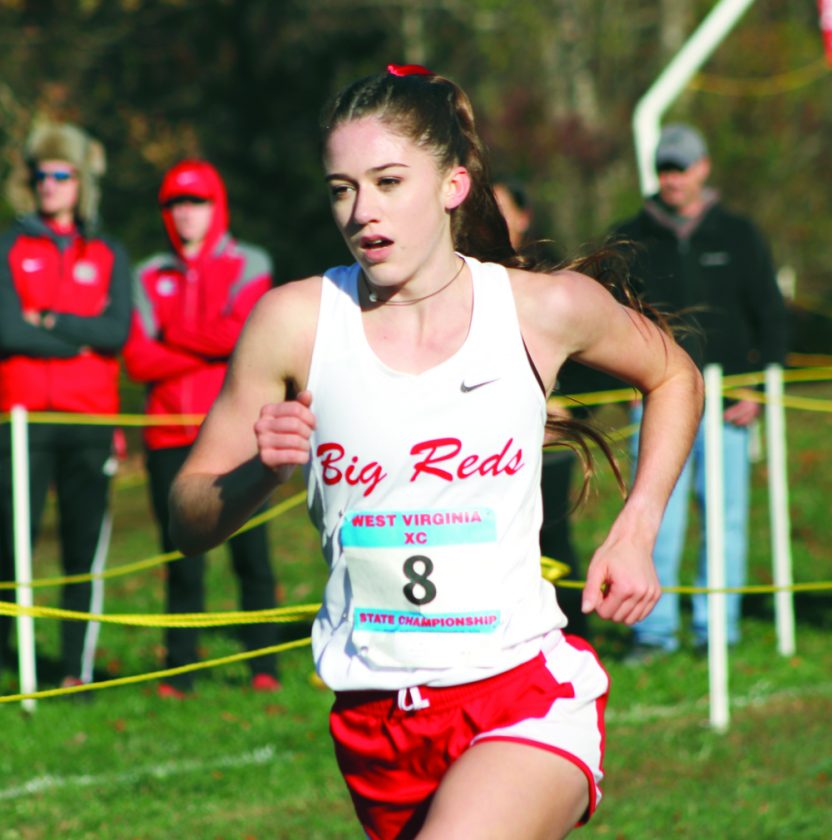 ONA — The city of Morgantown had plenty to celebrate after the University and Morgantown High cross-country teams arrived home from Cabell Midland High School on Saturday evening.

Hawks’ and Mohigan runners laid claim to not just team state championships, but the individual titles.

Morgantown’s Lea Hatcher ran the second fastest time at the course for her title with a completion of 17:24.78. She outran teammate Athena Young (2nd) by 10 seconds, and another teammate Irene Riggs by 70 seconds. All three earned all-state honors.

Defending state champion and senior Big Red Madison Trippett followed the Mohigans in her fourth straight all-state performance. After she was projected to finish seventh, Trippett executed coach Larry Games and her game plan well. She certainly had enough left in the tank. University’s Caroline Kirby, the fifth-place runner, finished 11 seconds behind the Big Red.

“It was my goal since freshman year to make all-state all four years and it is so exciting to actually accomplish it. I am so happy it came true.”

She still couldn’t help but comment on the level of competition on the course early Saturday morning.

“It was one of the toughest state meets and it was just amazing,” added Trippett.

The Big Red girls as a team finished seventh overall. An accomplishment leaving coach Games satisfied what is in store for the future for his young team. Emily Cunningham (45), Abby Broadwater (47), Payton Harvey (50), Allie Felker (51), Emma Sasyn (55) and Erin Cunnigham (56) all finished in the top 60. All runners but Madison and the Cunningham sisters return next season.

“We are young, but the girls ran a good pack and we got some good experience going forward into the future,” said Games.

Parkersburg High’s Franklin Angelos (9) finished sandwiched in between DeVincent and Thomas in a tightly contested boys’ race with a time of 16:28.99. Thomas finished four seconds behind the Big Red. In fact, eight seconds were the only ticks separating fifth and 10th places.

Riverside’s Trevor Carson set the Big Red in his final placing by running him down in the final 80 meters.

“I was pushing at the end but the Riverside kid always does that. He is so fast and he sprints to the end. I knew tenth place was right behind me and I did whatever I could to hold him off,” said Angelos.

Games liked the game plan from his young runner.

“Franklin ran a great race and went out in the first mile at eighth place which is very smart and stayed there for the rest of the race. He was in the running for all-state, but he ran a great race for a sophomore,” said the Big Red head man.

Angelos’ teammate Keegan Barnette got a good jump at the start of the gun. He found himself among the leaders as the front pack ascended the punishing hill on the state championship course. Though he faded from the front, Barnette finished in 16th place.

“He probably went off the starting line too fast, but top 20 in the state is nothing to sneeze about after a good race,” said Games.

Parkersburg South finished in 12th place and was paced by a 33rd place finish by senior Cameron Marks.