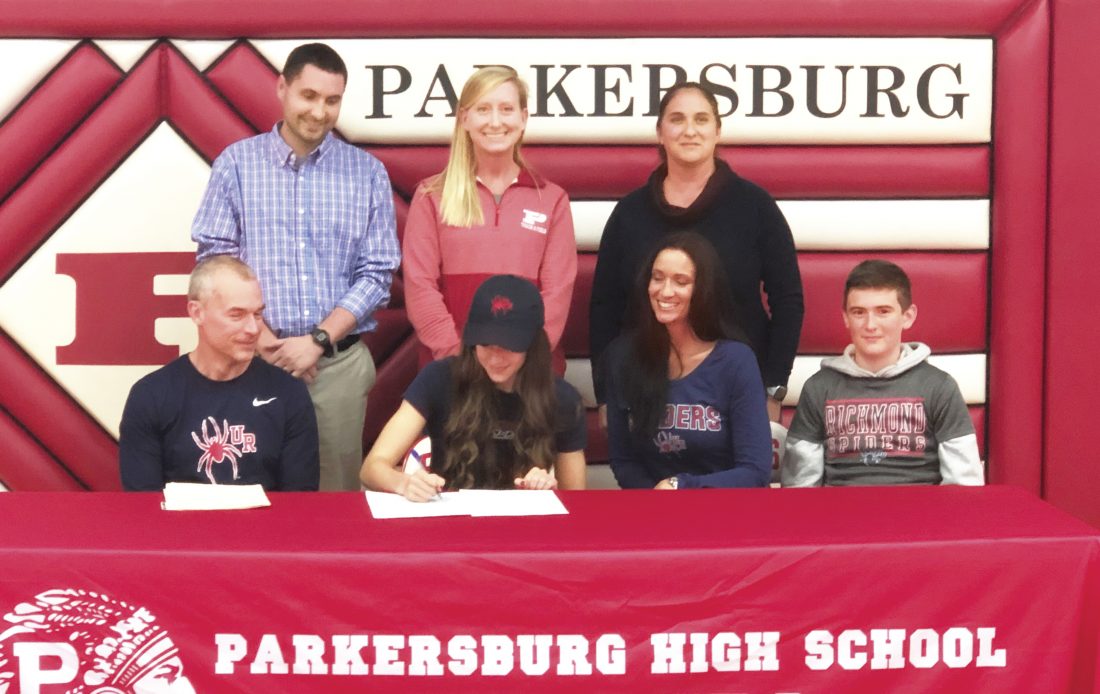 Photo by Tyler Bennett Parkersburg High cross country runner Madison Trippett signs her National Letter of Intent to the University of Richmond Monday inside the PHS Memorial Fieldhouse. Watching her sign her NIL on the bottom row are (from left to right): father Kevin, mother Deborah, and brother Hunter; in back row(from L to R): coaches Sam Vincent, Amelia Wolfe, and Lia Fleek.

The track and field/cross country powerhouse will continue her academic sporting career at NCAA Division I Richmond of the Atlantic 10 conference.

Trippett burst upon the cross country scene right from the start of her high school career.

She placed third with a time of 19:28.34 in her first showing at the WVSSAC state cross country meet.

Improving her time by nearly 30 seconds with a time of 18:50.92 in her sophomore year, however, she finished in seventh place.

Her junior year was the best showing for the Big Red at Ona, as Trippett ended up being named state champion when she crossed the finish line first with her best showing in all four appearances with a time of 18:00.41.

Trippett’s senior year didn’t go the way she was hoping to go after training hard in the offseason in search of winning her second straight title.

She struggled with a stress fracture that sidelined her for the majority of the regular season.

Trippett won the Class AAA Region IV title in her first race back after the extended lay off and later finished fourth the next week with a time of 18:46.61 in her final run as a Big Red.

Finishing in the top-10 four straight years, Trippett etched her name in Big Red history when she was named the first Gatorade West Virginia Cross Country Runner of the Year in school history.

“Just running for PHS has been such a great opportunity. It’s been really fun and I’ve had the ability to accomplish very good things here. I’m just thankful for that and it’s been a great experience,” Trippett said.

Trippett noted that the recruiting process started for her right before her junior year. Richmond didn’t get into contact with Trippett until a meeting with head men’s cross country coach and former two-time All-American at St. Marys Steve Taylor during this past July’s Country Roads Running Camp at Black Bear Resort.

The Spiders joined the final list between Kentucky, WVU, Furman and Wake Forest. Trippett decided the Virginia based campus was the right place for her after getting a tour of the campus and program facilities during her official visit.

“The whole recruiting process started the beginning of my junior year, but I wasn’t in contact with Richmond until this summer when I met coach Taylor at a running camp I went to,” Trippett said. ” I wanted to be at a small school so that’s why I went with Richmond. It was definitely the prettiest campus that I was on, they have top-notch facilities and it’s just a great school.”

“I want to thank my coaches for sure, coach (Larry) Games, coach (Amelia) Wolfe, coach (Sam) Vincent and all my coaches. They’ve been super supportive and super helpful as well,” Trippett said. “My parents and grandparents are the most supportive people ever and I wouldn’t be here without them.”