Martinsburg awaits the Patriots with Wheeling opportunity on the line

South moves on to date with Bulldogs 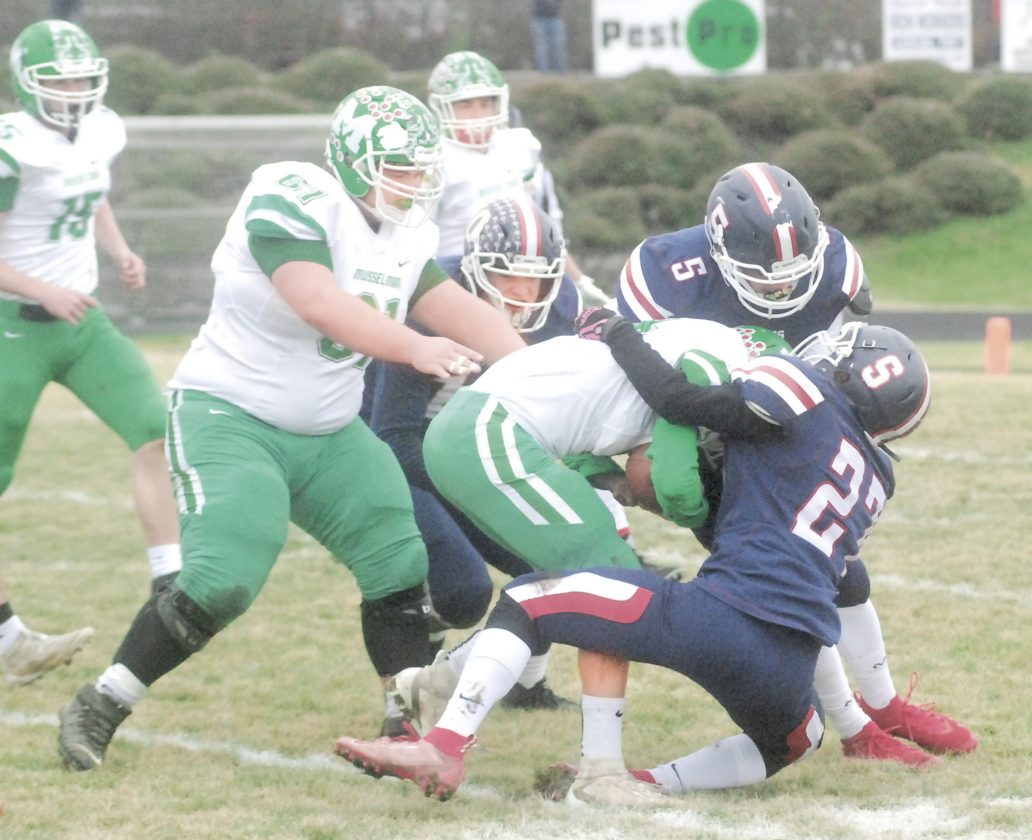 PARKERSBURG — Parkersburg South overcame a 10-point halftime deficit, three turnovers and rainy conditions to come away with a 52-33 victory over Musselman in the Class AAA state quarterfinals Saturday at Erickson All-Sports Facility.

The Patriots, now 11-1, will take on three-time defending state champ Martinsburg at 1:30 p.m. next Saturday in the semis. The Applemen finished the season 9-3.

Brandon Penn threw for a touchdown, ran for two scores and had a pick-six for South as he continued to build his case for the Kennedy Award. He rushed for more than 200 yards in the second half alone to help the Patriots rally from a 27-17 halftime deficit.

“(Penn) puts a lot of work and effort into the weight room and he’s really got his body prepared to be what it is at this point,” said South head coach Nate Tanner. “Very strong kid. He was just kind of a young man on a mission, just running hard and running strong.”

Musselman boss Brian Thomas was impressed with what Penn was able to do.

“He’s a good football player, man,” Thomas praised. “He’s up for the Kennedy Award. He’s one of the best. He can throw, he can run. Anytime you play a dual threat quarterback, you can defend something perfect and he’ll still make something out of nothing. He did that a couple times tonight. He got things going.”

Musselman, playing without standout running back Blake Hartman due to injury, opened the scoring on Ben Bartles’ 1-yard TD plunge with 3:54 to go in the first quarter.

South didn’t take long to respond. Penn connected with Levi Rice for a 50-yard touchdown pass to tie things up at the 3:02 mark.

The Patriots claimed their first lead on their next possession. Devin Gaines took a 32-yard carry down to the Musselman 1-yard line before punching it in one play later to make it 14-7.

South then forced a three-and-out, but fumbled the ball right back to the Applemen. Musselman was unable to score, but forced another fumble on the ensuing punt return and cashed in with another Bartles 1-yard touchdown run to make it at 14-all.

After a 30-yard kick return by Donathan Taylor, South drove to Musselman’s 14-yard line and retook the lead, 17-14, on Ben Haught’s 31-yard field goal. Haught also was 7 for 7 on extra point tries.

Then, momentum swung in Musselman’s favor. Kagen Teets took the first play of the ensuing drive 79 yards for a touchdown to give MHS a 21-17 lead. After South coughed up the ball for a third time on the kickoff, Caleb Hardy connected with Nicholas Zamora on a 38-yard touchdown pass to stretch the lead to 10, 27-17, at the break.

“Coming out of halftime, we needed to get three-and-outs and execute on offense. Ultimately, that’s what the kids did.”

Penn got things started by taking the first play from scrimmage 58 yards for a touchdown to make it 27-24.

After forcing a three-and-out, South’s offense went right back to work. Penn had carries of 28, 10 and 24 to get the ball inside Musselman’s 5. Facing second and goal at the 1-yard line, Penn carried the ball and fumbled into the end zone. Fortunately for the hosts, Jake Hogsett was there to fall on the loose ball for the touchdown, putting the Patriots on top 31-27 with 7:45 to go in the third.

“We’ve got a gritty bunch,” Tanner said. “We kind of pride ourselves on ‘Southside tough.’ These kids showed what toughness was about today, not just physically, but mentally and emotionally. Can’t be more proud of this group.”

The Patriots made it a two-score game on Gaines’ 3-yard touchdown run at the 9:02 mark in the fourth quarter, but Musselman answered on Zamora’s 40-yard scoring scamper with 4:06 to go. The two-point try was stuffed to make it 38-33, South.

With the Applemen clinging to life, Penn put things away with a 49-yard touchdown run and then a 78-yard interception return for a score.

Though the Applemen were able to break off some big plays, they missed Hartman’s presence on the field. Thomas, however, didn’t make any excuses.

“Blake’s the best running back in the state of West Virginia,” Thomas said. “Point blank, no doubt about it. You take any player of that caliber off a team, the team’s going to look different. But that’s not the reason we lost this game. I really believe that. We were up 10 at halftime and we didn’t close it out. We’re not looking for anybody to feel sorry for us.”

Added Tanner, “(Musselman’s) a good football team. They didn’t have their stud Hartman, but I was impressed with how they didn’t just totally go away from what they do. They came out and did what they’ve done all year long. They’re a tough team.”

South will now play in its first state semifinal game since 2003, which is also the year the Patriots brought home a state championship.

“When I first got here in March, I met with the kids and laid out the vision,” Tanner said. “We talked about the vision as far as being the best football program in the state of West Virginia. We’re two games away from that right now. Next week we get an opportunity to try to beat the man.”