All-American Dom Cizauskas ended his Pioneer career on senior day with eight solo tackles and a dozen total stops. He also had a pair of sacks and a trio of tackles for loss.

The Pioneers (7-4, 6-4) held a 3-0 halftime edge as Justin Watts converted his 21st field goal of the campaign, a 35-yarder with just three ticks left in the second.

FSU answered with its lone six-pointer at 7:55 of the third via a trick play as Ben Sexton caught a 5-yard TD pass from George Richardson, which put the G-men behind 7-3 following Jeremy Harrison’s extra point kick.

Gavin Lavat led all rushers with game-highs of 26 attempts for 70 yards in the loss. Former Braxton County Eagle Seth Arnold toted 22 times for 52 yards for the victors.

Glenville State, which went 0 for 12 on third down, punted seven times as Watts finished with a 41.7 yard average per boot.

Brown, Lilly and Delonte Hood also had a sack apiece.

MARIETTA — Mount Union showed why it is the top-ranked football team in all of Division III.

The Purple Raiders rolled to a 69-7 win over Marietta College Saturday at Don Drumm Stadium, out-gaining the Pioneers 699-229 on offense.

Mount Union (10-0) gained 488 of its yards through the air and scored via the pass eight times. DeAngelo Fulford completed 18 of 20 pass attempts for 296 yards and five touchdowns. Four of his scores went to Justin Hill, who caught 12 balls for 204 yards. Braxton Plunk also got some play at quarterback, going 9 for 16 for 179 yards and three TDs. Derrick Harvey caught four passes for 130 yards and a score while Jordan Lee and Edwin Reed also caught touchdown passes.

Josh Petrucelli led the Purple Raiders’ ground game with 12 carries for 126 yards and a score. KJ Redmon capped the scoring with a 1-yard plunge with 3:27 remaining.

Marietta had a glimmer of hope at the 5:39 mark in the first quarter. Trailing 14-0, Logan Domer broke through for a 66-yard scoring run and Jacob Griffin’s extra point had the Pioneers within seven. The Raiders, though, scored 27 unanswered first-half points to go into the break up 41-7.

Domer finished with 82 yards on seven rushes, while Bryce Agnew added 36 yards on 16 totes. In his final game as Marietta’s quarterback, Kyle McSweeney completed 18 of 30 attempts for 133 yards and threw one interception. His top targets were Austin Veatch (9-74) and Robert Nelson (6-57). 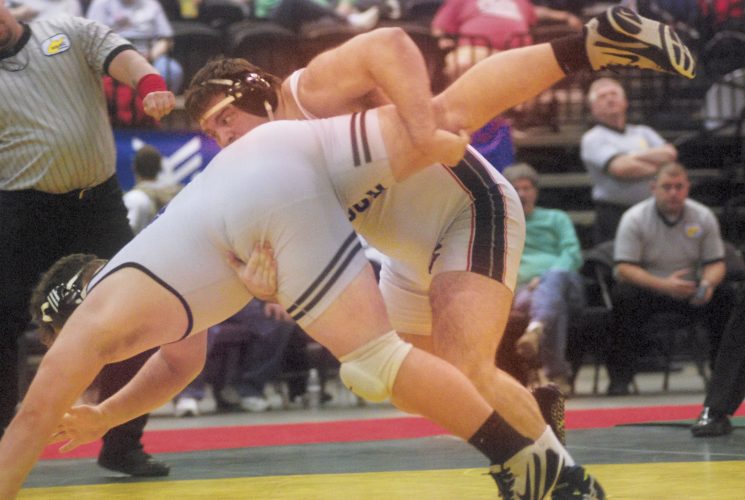