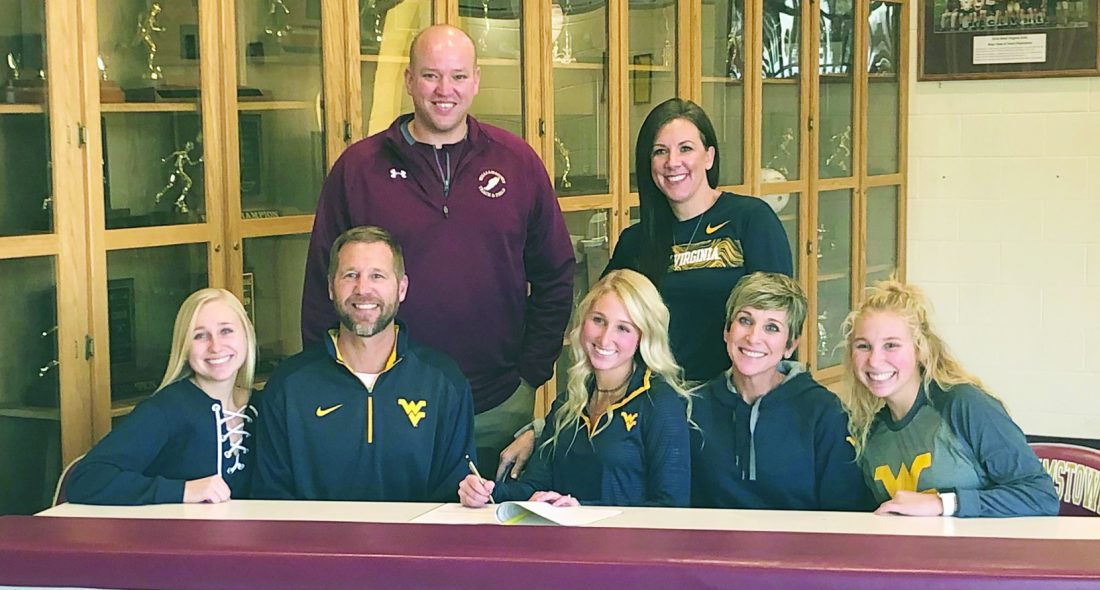 WILLIAMSTOWN — Williamstown Yellowjacket two-sport senior athlete Lilly McMullen announced that she will continue to run track and field at the next level, by signing with the West Virginia Mountaineers Friday afternoon at Williamstown High School.

Being named first-team all-state soccer and state champion in track and field, McMullen had a decision between what sport she wanted to continue at the next level.

Always wanting to attend a big school, the choice for McMullen became easier after the Mountaineers came in contact with the then-junior after her impressive showing at the WVSSAC track and field state meet in the spring.

McMullen owns the state record in the 100-meter dash during prelims and later finished third. She also won the 200 (25.87), 400 (56.97), and was part of the 4×200 state championship team with younger sister Ella McMullen, Camryn Irvin and Emma Berman.

For her efforts in Charleston, McMullen placed second overall in Class A in total points behind ‘Jacket teammate Ella Hesson.

On the pitch, she was one of the main attacking options for a team that scored 89 goals and finished at 17-3-1.

For the majority of her senior year, McMullen found the back of the opponent’s net with ease. Scoring 27 goals, including six hat tricks, six assists and was named WVHSSCA All-State Class AA-A 1st team forward.

“I knew I wanted to go to a bigger school, so I didn’t think I had the potential to do D-1 soccer, but that’s OK. In my junior year of track, I kind of realized that I had the potential to do D-1 college track. A couple of weeks after the state track meet, one of the girls that have run track emailed me and said “Hey, we’re really interested in looking at you and I was very excited,” McMullen said. “Because I always really wanted to go to WVU but I didn’t think they would contact me. It’s such a big school and I was very excited.”

McMullen soon got into contact with WVU assistant coach Erin O’Reilly and the two quickly built a relationship. “She really helped me and we have talked a lot. I went to a couple of the practices and she was there, she was very nice,” McMullen said.

Already having a connection to WVU thanks to sister Ally currently attending and her mother Tina attending in the past. McMullen took her official visit to Morgantown in early October and knew it was the place for her.

McMullen was shown around the campus, from seeing the track facilities, practice and even caught a Mountaineer football game to round out the trip.

Still taking additional visits to other schools, however, McMullen had her mind already set on the gold and blue.

“I visited a couple of schools and I did look into a lot of them. They were all super nice, very encouraging and they gave me so much knowledge about their school because I didn’t know much about them, but WVU has always had that warm place in my heart. “ McMullen said. “On the campus, my first thought of the view was it’s just so big. I come from a small school in a small community, I think I wanted that change to a big school where everything is spread out. I think that’s why I liked it so much. I just loved the campus and the feel of Morgantown.”

McMullen plans to major in the medical field with the possibility of exercise physiology but is still unsure.