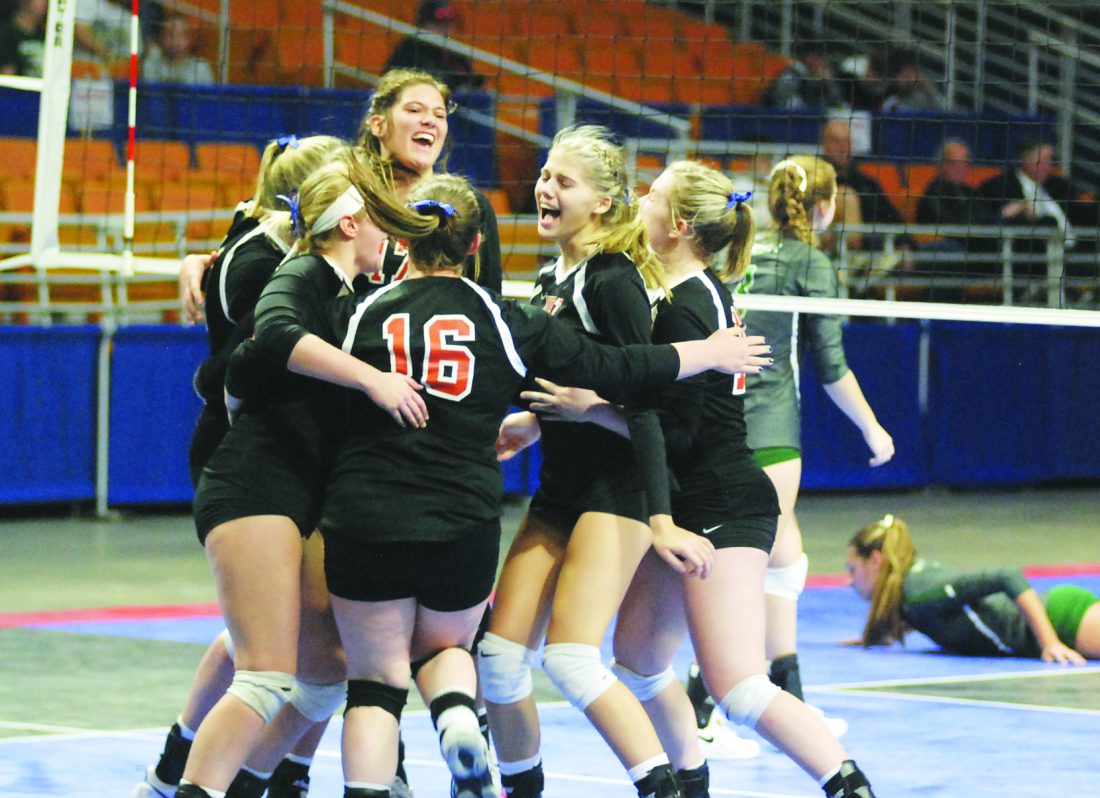 CHARLESTON — In order to be a championship caliber team in any sport, it takes a lot of dedication, hard work and bonding.

Nowhere was that more evident than with Wirt County seniors Kylie Stephens and Maggie Bailey, who finished off their Tiger career in style on Saturday by hoisting the Class A state volleyball trophy with their teammates.

For Bailey, suffice it to say she was just glad to still have the opportunity to compete for the orange and black following the Tigers’ Little Kanawha Conference championship setback to Parkersburg Catholic last month.

“I got in a little car accident,” Bailey said of her drive home from the high school that night. “But I came back strong. I was out for a week of practice. It was rough. It was hard not to be with my team, you know? I’m a very big team player and I like to be with them. I enjoy being there.

“It was really hard to have to sit back and wait and let my head heal, but we got back together and it was a good time. We worked hard once we got back and they worked really hard while I was gone to help out.”

Stephens, who is currently undecided about what her future holds on the court, said of her teammate “me and Maggie have played together since we were 12 years old and it’s been like the best experience ever and I love her so much.”

“It was really exciting to get that first state championship my sophomore year,” Bailey added. “We worked together as a team. We knew that that was our goal at the beginning of the season and Kylie and I had talked. We knew together that this is what we wanted.

“It’s been so great (being a Tiger). The team atmosphere is especially the most important part. We allow ourselves to be good and just the coaching, the teammates and everything together is what is really exciting.”

“Oh gosh, I love her so much. We’ve played together forever and she’s my best friend,” Stephens said of Wyer. “It’s (her career) been amazing. I can’t thank my coaches enough, Janet (Frazier), and Miriam (Beall) stepped up this year, Mike (Shremshock) and Courtney (Burns) and Erica (Whipkey) and everyone. I can’t thank them enough for all they’ve done for me and I see Janet as a second mom.”

When asked what she thought next year’s team could do Stephens replied “they are going to have a really good shot. They have some good freshmen coming up and freshmen now who played JV really stepped up to their role.

“Me and Maggie, obviously, we will be in the stands cheering them on, but they got it.”

As for Beall, the Tigers’ first-year head coach who replaced Mrs. November (Frazier), she admitted of her seniors “they were two really important components of our team. I’m really glad we could finish it.”

When asked about 2020 and repeating she added “well, hopefully, you know? We’ll work with what we have and go from there.”

“They can do it and go as far as they will let themselves go as long as they work together and come in and put in the work,” Bailey stated. “There are very, very important pieces here right now that could take it all again next year. I truly believe in my teammates I’m leaving behind.”