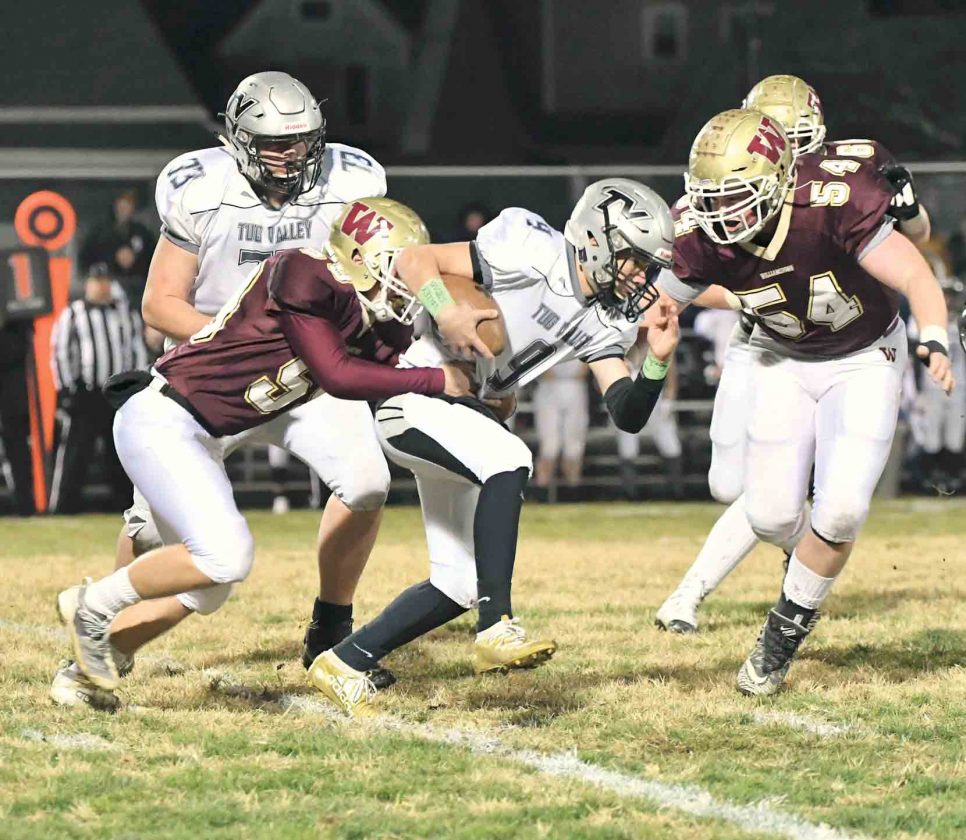 Photo by Neil Smith Williamstown’s Jacob Modesitt (59) brings down Tug Valley’s Ethan Varney as Leewood Molessa (54) comes in for the assist during the Class A first round game last Friday at Yellowjackets Field.

WILLIAMSTOWN — Williamstown High’s football team has a 3-plus hour drive ahead of itself to Charmco, W.Va.

The fifth-seeded Yellowjackets are scheduled to play host and fourth-seeded Greenbrier West High in a Class A quarterfinal playoff game at 7:30 p.m. Friday.

“I was there that night, and Williamstown has a really nice football team,” Harris said. “They’re faster than us, and they’re well-coached.”

But the Cavs do have a size advantage over the Jackets.

“They’re pretty big and athletic,” said WHS boss Terry Smith. “They mostly run the ball, and that could make it tough, especially if it rains.”

On the season, Brown has “gained around 1,700 yards and scored 28 touchdowns,” Harris said.

Also, McClung will position himself on the line as a blocker.

Against TV, Pack also completed 13 of 18 passes for 77 yards and two touchdowns to junior Lawson Vaughan.

Cavs junior Levi Weikle is another receiver the Jacket defense will need to keep an eye on.

A couple of other GW players who could have an impact on the game may be 6-2, 210-pound junior inside linbacker Zach McClung and 6-3, 250-pound senior lineman Isaac Brown.

“We have good size, and they can move pretty well,” Harris said. “But we’re not fast.”

Speed is one of Williamstown’s strengths, especially when 5-11, 187-pound senior RB Ty Moore touches the ball. On the season, Moore has gained 1,665 yards on the ground and scored 21 touchdowns.

“We figure Greenbrier West’s defense will be keying on Ty,” Smith said. “But Ty is up for the challenge.”

Thing is, Moore is far from the Yellowjackets’ only offensive weapon.

Junior QB Braden Modesitt has a good arm and is mobile. He also has good receivers in Eric Brown, Nick Bondi, Mason Deem, and Kole Sutton, and a couple of other backs in Logan Richards and Trevor Oates.

All of these O-linemen play on the defensive side of the ball as well.

Against Tug Valley, Ankrom led the Jackets in tackles, Smith said. But on the season, Brown, a 6-3, 218-pound inside linebacker, is the team’s top hitman.

Smith believes to be successful at GW, Williamstown will have to “minimize turnovers.”

“We’ve got to hold on to the ball,” he added. “We had none against Tug Valley but five in the Doddridge game.

“We can’t make any mistakes,” he added. “And we need to take care of the ball and block well.”

“I hope we can contain their speed,” the coach continued. “And I hope that we can compete with them.”