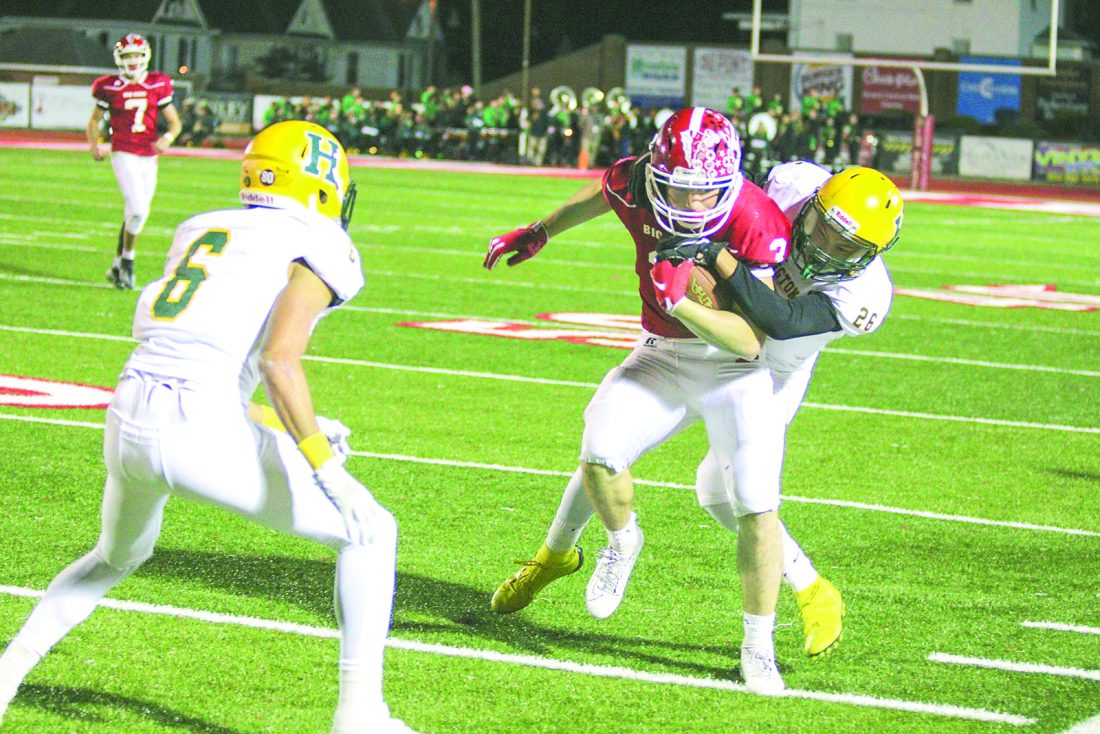 PARKERSBURG –On a cold Friday night at Stadium Field, the Parkersburg Big Reds dropped a 44-13 game to the Huntington Highlanders on Senior Night. Early in the game, the Highlanders’ rushing attack of Brocton Blair and Tajan Blackwell had the Big Red defense on its heels.

However, PHS quarterback Bryson Singer had a chance to make history with his legs. After Blackwell led his team on two scoring drives, Singer and the Big Reds responded. Coming into the contest Singer needed 37 yards to become the first player in Parkersburg High School history to pass and run for 1,000 yards in a single season. He achieved that feat with 10:20 left in the first half on a 20 yard scramble to convert a third down.

The Big Red offense cashed in a few minutes later, as Singer plunged in from six yards out to cut into the HHS lead at 13-6. As good as the offense looked at that point, the Highlanders dialed up the pass rush and controlled the ball and clock throughout the remainder of the game. It led to PHS defenders having to make plays all over the field to contain the Huntington attack. PHS’s Justin Waybright made his presence known with 8 total tackles and two sacks on Blackwell. Other key defensive contributors included C.J. Wade, Gage Fiore and Casey Mahoney.

Despite the defensive pressure, the 342 total yards of offense for the Highlanders were possible due to the playmaking on both sides of the ball. Singer was under pressure throughout the night, and he tossed four interceptions in the loss. While he tried to keep the Big Reds in the contest, too many miscues as a team (including five fumbles as a team) dug them into a hole they couldn’t escape.

The other PHS points came with 1:31 left. Michael Owen found Julian Matrin for a 25-yard touchdown, as that score prevented the Big Reds from being held to single digits.

After the loss, PHS head coach Mike Byus said he wants his team to learn from the loss and prepare for next week’s crosstown showdown at the Erickson All-Sports Facility against Parkersburg South (who lost 35-27 on the road to Wheeling Park on Friday).

“Well, we’re now 5-4, and we’ve got a chance to finish the regular season at 6-4,” he said. “We’re going to do the best we can to go back to the drawing board to go get ready for next week. It’s a rivalry. It’ll just be everybody keyed in and ready to go.”

Huntington’s record now stands at 5-4, and head coach Billy Seals says with his team having clinched a playoff spot, they executed everything they wanted against the Big Reds.

“I thought we controlled the line of scrimmage. I thought our running backs ran hard” he said. “We got the ball in space a bit and made some things happen in the passing game. This game and Capital were probably our two most complete games we’ve played. It was a good win for us against a very storied program. Coach Byus is one heck of a coach, and we’ve got a lot of respect for Parkersburg.”