Doddridge sets up date with Williamstown 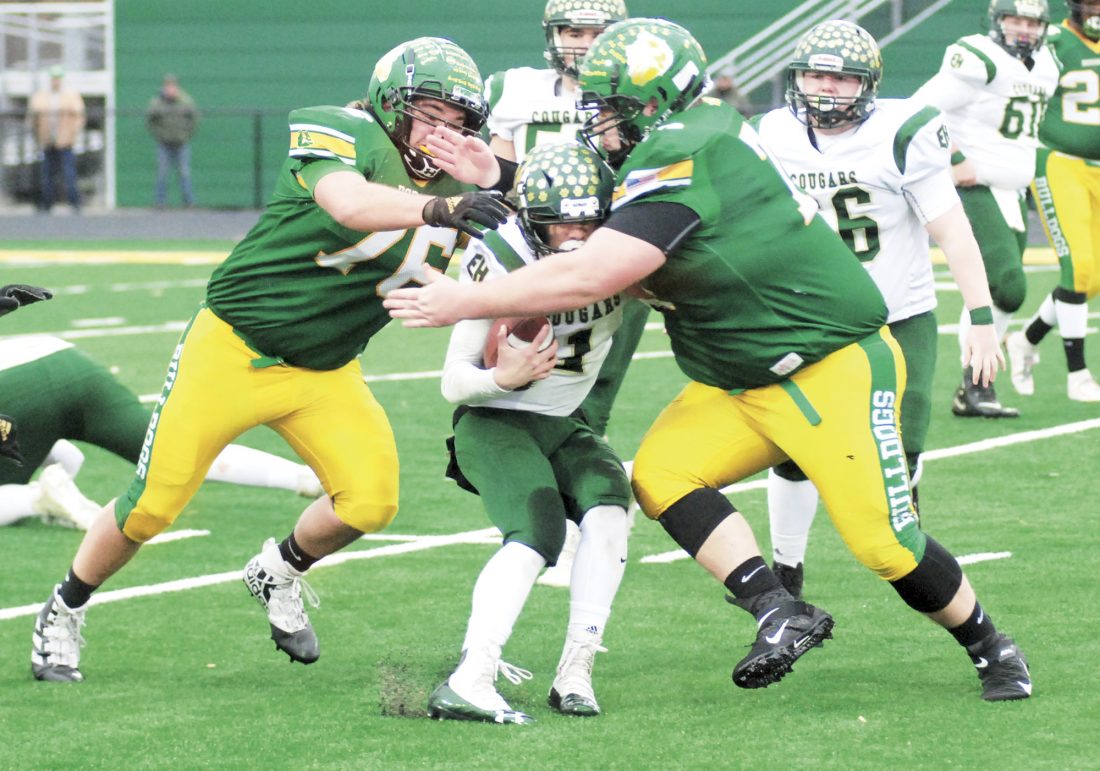 WEST UNION — Doddridge County’s defense stood tall and Hunter America iced the game with a 30-yard touchdown run in the fourth quarter here Saturday afternoon at a rain-soaked Cline Stansberry Stadium as the No. 1 Bulldogs knocked off No. 8 East Hardy in the Class A state quarterfinals, 21-6.

The victory for the 12-0 Bulldogs of head coach Bobby Burnside puts his program in the state semifinals for a second straight campaign. The green and gold are set to play host to No. 5 Williamstown at 7:30 p.m. Friday back in West Union with a berth to the championship game in Wheeling on the line.

Although Mother Nature didn’t rear its ugly head until late in the first quarter, the Cougars (8-4) of head coach Devon Orndorff used some trickery on their first drive to help take an early lead. Cole Pusl took an end around and hit Andrew Tharp for a 36-yard gain.

Three plays later, it was Dawson Price who hauled in a 20-yard TD strike from Christian Dove, but the snap was bad on the extra point and the visitors settled for the 6-0 cushion at the 8:53 mark.

With the weather getting worse, fumbles became an issue for both teams. The two squads fumbled five times apiece with the Cougars losing two, both thanks to Austin Kelley recoveries, while the Bulldogs lost three. EHHS had fumble recoveries by Austin Alt, Dove and Brayden Ritchie, who finished with game-highs of four catches for 85 yards.

Dove, who left the game in the second half due to an injured throwing hand, finished 6 of 20 for 85 yards with three interceptions. His initial pick came on the Cougars’ third series when Hunter Jenkins snared the first of his trio of interceptions. Jenkins’ last pick came against freshman signal-caller Mason Miller late in the fourth.

“It was a great team win,” Jenkins said after the game during a continued cold downpour. “The defense was great. Anytime you hold a team like them to six points, it’s really a great thing.

“Everybody was saying it was going to be a defensive battle so it put a lot of pressure on our offense and stuff, but we knew our defense was capable of making big plays. It’s great. This year we’re hoping to go all the way.”

The hosts took the lead for good at 11:10 of the second quarter. Griffin Devericks caught a bubble screen from Noah Bumgardner and raced 71 yards to paydirt and DJ Devinney’s extra point was true.

Alex Miller fumbled on the Cougars’ very next play and the hosts wasted no time capitalizing on the miscue. Following a penalty, America had runs of 3 and 12 yards before he bulled in from the 2 for the 14-6 lead. DCHS got the two scores in a span of 65 seconds.

“I will say this, we needed that (the seven turnovers) because we turned the ball over (three times),” coach Burnside stated. “No one to blame, but the defense stepped up big. We moved the ball well. We just didn’t put it on the scoreboard. That (the turnovers) was huge.

“Bear Burnside, the defensive coordinator, they work so hard. We didn’t do them a ton of favors scoring a lot of points. We had some opportunities. That team was good. Getting ahead by two touchdowns was big.”

East Hardy’s final four first-half possessions started with the Miller fumble and was followed by Jenkins’ second pick, a third-down sack by Bulldog Dylan Knight to kill a drive and another fumble which Kelley pounced on. Kelley also had an interception in the third quarter.

The Cougars’ first drive of the fourth quarter started on their own 20, but a bad snap resulted in a 14-yard loss on first down. Following a 14-yard punt, the Bulldogs took over at the 30. America, who finished with game-highs of 31 rushes and 196 yards, took the first-down handoff on the ensuing drive, darted 5 yards, stiff-armed a Cougar defender to the turf and then bolted the final 25 yards untouched to the end zone.

“I can’t tell you how excited we are,” added the Bulldog head man. “We are in the final four. We were there last year and we got that taste.”

When asked about the effort of his safety Jenkins he replied, “what I’ve seen all year long. That kid is an all-state safety. He just covers the field for us and makes tackles. I’ve seen it all year long.”

Devericks finished with three grabs for 82 yards. Dove (11-51) and Miller (11-29) led the running attack for the Cougars, who also got four catches and 52 yards from Tharp.