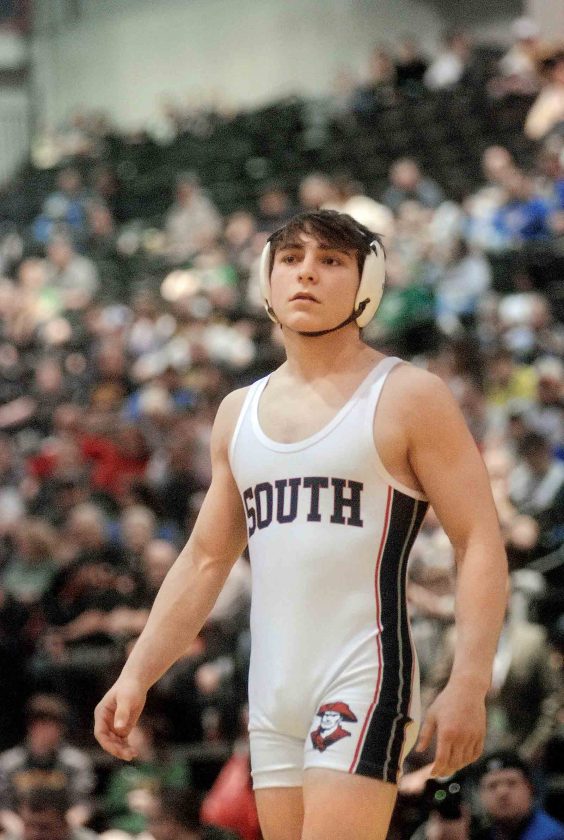 Parkersburg South’s Brayden Roberts, pictured here taking in the moment prior to the start of his 145-pound state championship victory (2-0) versus Wheeling Park’s Andrew Shelek earlier this year inside Huntington’s Big Sandy Superstore Arena, has decided to continue his career as a student-athlete for West Virginia University. (Photo by Jay W. Bennett)

Shortly after Sam Henson and his family moved to the Mountain State after he accepted the WVU wrestling head coaching job, his son Wyatt and Roberts met in a match at the W.Va. Duals inside the Rod Oldham Athletic Center.

“Wyatt and I battled it out in the match and I won 5-2. But with about 20 seconds left and me leading by a point, I hit a slide and had him in a merkle. He posted his arm and then his elbow just dropped. I felt so bad because I had never done something like that to a kid. I was in 7th grade and I weigh 100 lbs. and am ready to puke,” said Roberts.

This would be the beginning of a friendship laying the groundwork for a big down-the-road decision.

As the younger Henson healed, Roberts would make the journey to Morgantown for 1-on-1 sessions with other wrestlers. Some were from Team Quest in Pennsylvania. “Sam called my dad and wanted me to start training with Wyatt and we became pretty close friends and still talk to this day,” said Roberts. “I formed pretty close relationships with all the families up there too.”

Former Patriot Luke Martin, who was recruited by Henson, was joined by his teammate at the Mountaineer camps. “I knew my way around the school and the wrestling program and one relationship led to another,” he said.

“Everything was just so cool,” said Roberts of the recruiting process. “It was cool to be wanted by a team. It was cool to have people texting you all the time wondering how you were doing and asking you to come to their school and check out the atmosphere and campus.”

What made it cooler for the Patriot?

“My ultimate goal I have been chasing since I was 4 was for a Division I scholarship and to be in a Division I atmosphere,” said Roberts.

The only down side was he actually had to make a decision. “I couldn’t wrestle for all of these schools,” he said with a chuckle.

Lehigh head coach Pat Santoro and Flynn were the first Division I schools to reach out at the beginning of the recruiting process. Santoro had two secret weapons as Roberts’ close friend Josh Humphreys as well as former teammate Louden Haga were Mountain Hawks.

“WVU was always on my mind when it came to the college decision,” he added.

Things fell in to place on his official visit to Morgantown. “Every time I go up there for a visit or a football game, I am the happiest person and was in the best mood possible. A smile never left my face,” said Roberts. “The wrestling practices were hard and tough, but that is what I signed up for. There is never a moment I wasn’t enjoying myself in Morgantown.”

Flynn wasted no time giving his new recruit an assignment. It is one he has heard for a long time.

“For the longest time I have needed to work on my neutral position. It isn’t that I am bad on my feet the confidence level I have is not good enough for me to take shots during a match,” said Roberts. “I have been working on it and I am starting to take some shots.”

His projected weight class for the Mountaineers is between 149-157. “It just depends on how big I get this summer,” he said.

For now, Roberts enters his senior year as part of a returning nucleus for the five-time defending Class AAA state champions. No decision has been made on where he will wrestle but PSHS head coach Shaun Smith dropped hints it won’t be at the same class as last season.

Roberts enters the season ranked seventh nationally, according to intermatwrestle.com, in the 152 lbs. weight class, but doesn’t foresee change being a problem.

“I am excited to get this season underway,” said Roberts.

Coach Smith is thrilled to have him back for one more season, as well.

“For him it is cool because he is a really young senior at 17 years old, so just for someone like that that keeps approving the way he does and he has beaten a lot of good wrestlers in the past year or two it just shows he loves wrestling,” said Smith. “Wrestling is what he wants to do and that is what he is – a wrestler.

“He is a special kid who it is going to be sad to see go. But I am looking forward to seeing what he can do in college and I have no doubt he is going to have a lot of success in college. He is self-motivated and self-driven and that is kind of hard to find in a good athlete like that nowadays.”