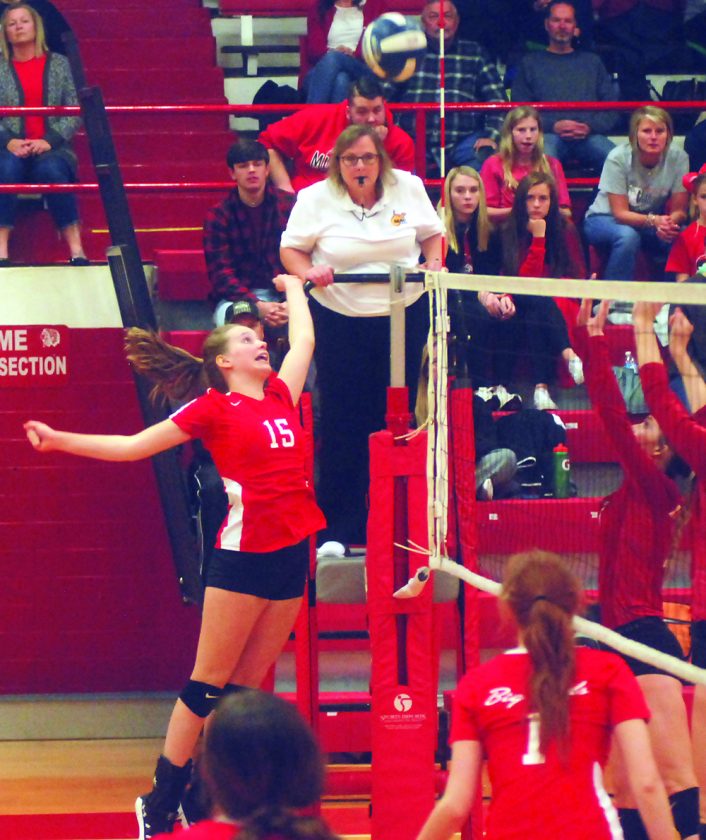 Photo by Josh Hughes Parkersburg’s Anna Umpleby (15) goes up for a spike during a high school volleyball regional match against Cabell Midland Saturday at Memorial Fieldhouse.

PARKERSBURG — For the first time in three years, the Parkersburg Big Red netters (34-11-5) are moving on to the Class AAA state volleyball tournament. It took four sets to claim the clinching victory against Cabell Midland on Saturday night from PHS’s Memorial Fieldhouse.

With each point gained, the Big Reds’ bench and faithful knew the moment was closer to happening than before.

The 24-26, 25-19, 25-14, 25-17 win during the Region IV semifinal match brought the best out of both squads, as a PHS team that has had Cabell’s number as of late came to play in this one. Like their win over Parkersburg South during the Sectional title match, it was PHS’s aggressive play up-front that sealed the deal.

A total of 19 kills from Anna Umpleby led the way, as she scorched the ball past Knight defenders with enough zip to get the job done. Clelia Tosatti Molinari tallied 11 kills in the victory, as those two dashed the hopes of an upset for CMHS. Kristen Lowers was also a heavy-hitter for the red and white, and her 13 assists kept the ball moving in critical situations.

The team effort included everyone, and Maggie Sauers led her team in assists with 15. That selflessness propelled PHS to the Charleston Civic Center for a state tournament date next Friday, and head coach Erin Thorpe was excited to celebrate with the girls who made it possible.

“It’s awesome. I’m so proud of these girls,” Thorpe said immediately after the win. “They worked so hard. Cabell Midland is a great team, and like I said last week, their record does not reflect who they are. They played the best I’ve ever seen them play tonight. I just told my girls whoever wants this more is gonna take it, they just worked their butts off.”

The win also gave the Big Reds an opportunity to battle against the defending Class AAA state champion Spring Valley Timberwolves in the Region IV championship later in the night. In order to make it to the championship, the Timberwolves had to fight off a hard-charging Parkersburg South Patriots (18-15-4) team. Although the Patriots were defeated 20-25, 21-25, 19-25 in a contest taking place in PHS’s Jack Stephens Gym, they fought hard for a rematch with PHS. However, it was not meant to be, as a sailing shot from the T-Wolves could not be tracked down by South’s back line of defense. That final point ended their season, but head coach Becky Bennett was thankful for her team’s effort throughout the tight loss.

“That’s probably the best game we’ve played, overall,” Bennett said. “Take nothing away from Spring Valley, but that was the best we’ve played against anybody all season. Some of it was little things we needed to do, some of it was calls that didn’t get called. I wish we could have done a little bit more for the seniors. This is a great group of kids that I’ve had, and I’m going to miss them.”

In the championship match, Spring Valley dispatched of the Big Reds in three sets: 25-18, 25-18, 25-12. That result doesn’t take away from the accomplishment of going back to Charleston, as coach Thorpe says this was a long time coming.

“They’ve worked since November of last year,” she said. “The first week after the state tournament, they asked if they could start working out. A lot of them put their hearts into AAU and AAU teams, and other ones were here in the gym working out and gaining muscle. We put a lot into the summer, as well. This kids wanted it, and they worked so hard.”