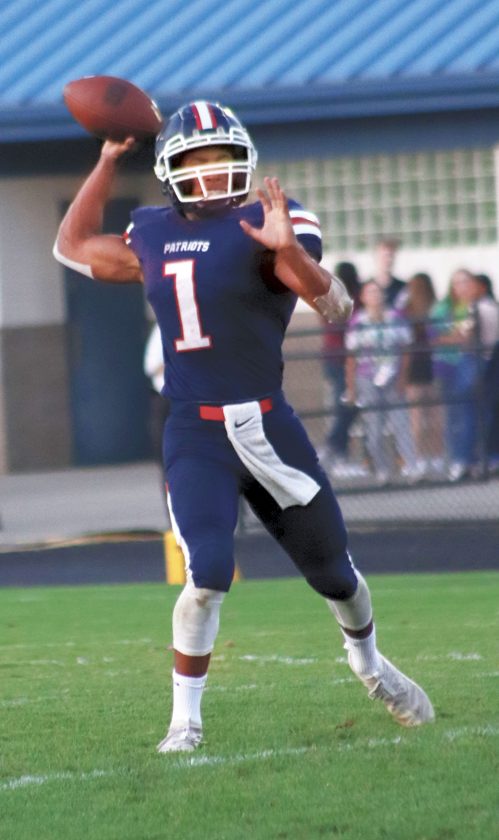 Photo by Joe Albright Parkersburg South’s Brandon Penn unleashes a pass against Princeton earlier this season. Penn’s answered all questions and can put himself in better position for the Kennedy Award with a stellar game against the Big Reds this evening.

Hopefuls for the vacated South quarterback position needed to gain as much possible arm strength in the offseason.

Nate Tanner’s hiring as the next Patriots’ grid-iron head coach marked a new era in more than one way.

Throwing motions after all aren’t the same movement as continuous handoffs.

The Air Raid Tanner’s scheme wasn’t, but his signal-caller would get a fair share of passing yards.

Finding his leader was another story, though there were needles in the haystack.

Brandon Penn stood out as a particular pointy one. A senior who pinned down the QB job his sophomore year only to see the celebration end in a snap.

His collarbone breaking in the season opener vs Ripley in 2017 couldn’t have been more terrible in the dramatic timing department.

Brayden Mooney’s iron grip, as sure as one of Penn’s defensive back tackles, on the position lasted the rest of the 2017 season and all of 2018 until Mooney’s graduation.

And he owned the job.

Faint promises for Penn’s increased offensive involvement went unfulfilled. There were a few opportunities, but not nearly enough for the Patriots’ talented athlete.

His true value to the Patriots was KFC mashed potatoes and gravy together, not one or the other (Who eats just potatoes at KFC?). The saltiness level increases further given what new Warren, Ohio head coach and last year’s South offensive coordinator Matt Kimes has accomplished with passer Kurt Taylor this season. His signature recipe appeared to be a good dish for Penn, too.

Misunderstanding his development on defense though would be criminal.

Blessings can arrive in the mold of anything.

Penn’s transformation into one of the most complete players in the state depended on this knowledge.

As fans know by now, Tanner’s choice mimicked the pretty good guess by HB Reese’s that chocolate and peanut butter went well together.

Penn’s quick re-education to one of the most sought-after responsibilities in sports leaves little to be desired and has the Patriots in a great place.

To say he has flourished during the Patriots’ 8-1 start to the season would be akin to saying Lamar Jackson is just having an OK year for the Baltimore Ravens.

His tackles are as sure as NASA scientist calculations, his quarterbacking screams dual threat, and his punts regularly travel 40 yards.

Kicks aren’t the only place yards have accumulated. He has surpassed both 1,000 rushing and passing yards.

If his nomination for West Virginia Gatorade Player of the Year isn’t obvious, what are the sports’ drink people watching on the field?

Parkersburg South haters can e-mail all the hate mail. Please see the below sentences.

Insert him on Martinsburg, Spring Valley, Capital or Huntington, then watch him be a competitive force. There’s no getting lost in the shuffle with him. Coaches could watch the opposition plan well for him, then see him still walk away eating his desserts.

Morgantown’s Preston Fox, one of the more talented players in the state, bottled up Penn nicely as the Patriot escaped the pocket earlier this season. Fox had Penn dead to rights … only he didn’t, nothing transpired as expected. One foot planted in the ground and a 180-degree spin to the right later resulted in a 38-yard gain. Grasping for air with a glance over his shoulder was Fox’s unpleasant reward.

If the Patriots didn’t score on that drive well it would have been a waste, but they did.

But of course, Penn is a quarterback and has to have a few impressive plays with his arm as well.

And Athens (Ohio) safeties nightmares are surely filled with the deep scoring completions in a 42-20 loss.

Moments paling in comparison to this evening – his last chance in the regular season to impress the Kennedy Award voters.

It is THE rivalry game in the state of West Virgina.

The eyes of the entire state turn to our nationally recognized get-together. Alumni and students pack the stands. Some of the football game may even look like it was played on the bleachers. Then the FBI’s spying eyes will see hundreds maybe thousands of alumni from both schools around the entire nation wake Saturday morning and eagerly read our story or check social media for results of this game.

The challenge stands as a gigantic task. These Big Reds as always are MSAC tough. Seeing CJ Wade barreling toward anyone as the MOV sack leader would scare many people. Justin Waybright hot in pursuit might be enough to move feet. Gage Fiore’s skills at linebacker rival Huntington’s Brocton Blair. Not to mention, the possible no fly zone of Big Reds’ safety Sam Potts.

Penn soon could be remembered as one of the state’s greats.