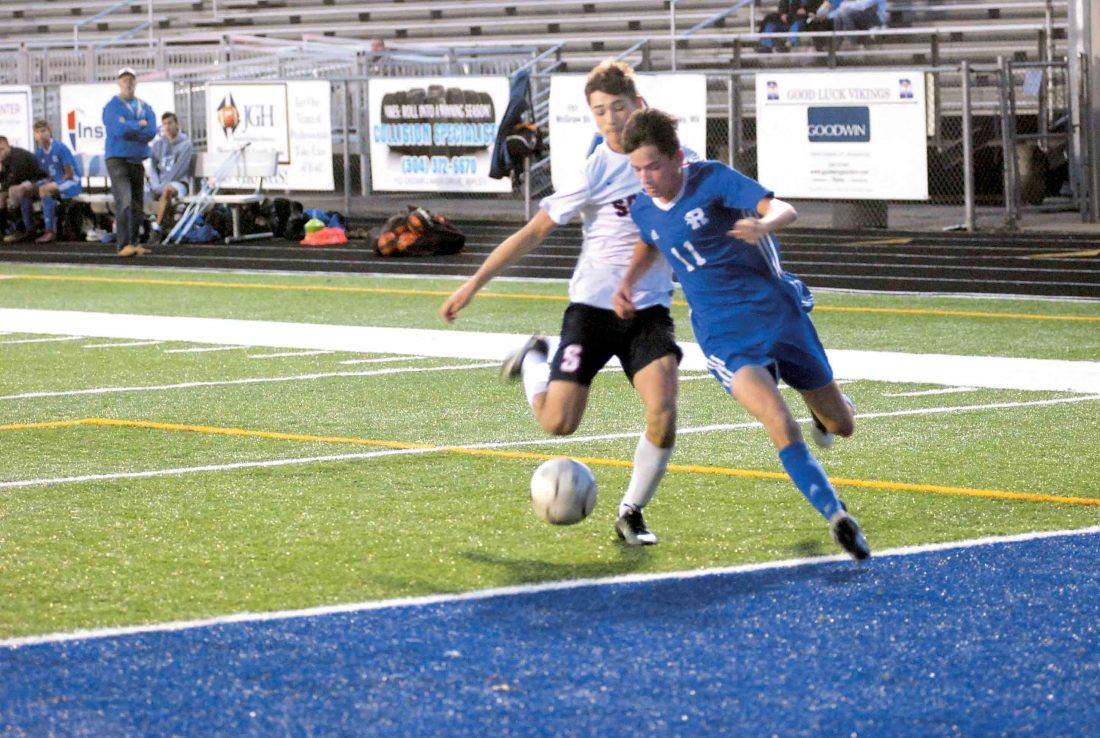 Photo by Josh Hughes Ripley’s Ian Gainey works against a Parkersburg South defender on the right baseline during the Vikings’ 7-0 Class AAA Region IV Section I semifinal win on Tuesday night in Ripley.

RIPLEY –The Ripley Vikings used a four-goal performance from Ian Gainey to drop the Parkersburg South Patriots in a 7-0 Tuesday night home win, and in doing so, are moving on to the Class AAA Region IV Section I championship against Parkersburg.

The Patriots held strong through the first 20 minutes of the match but were worn down by the end of the first 40 minutes.

Not helping their cause was a neck injury to Cameron Brace in the 19th minute that halted play for more than a half hour. When play resumed, that’s when the Vikings turned up the tempo and the score.

A frequent collaborator with Gainey was Broedy Boyce, as he found Gainey out in front of the South defense for his first score in the 23rd minute. Boyce had five assists in the win, and he was eager to keep dishing in the first half. However, the South defense limited RHS’s opportunities. The other two goals they gave up were courtesy of the Vikings being in the right place at the right time.

On a free kick from Boyce, the ball hit off a Patriot defender who accidentally headed the ball off goalkeeper Dylen White’s hand. At that point, Gainey cleaned up the mess with a header in the 28th minute. The last score of the half came from Jacob Harvey after a slow-roller skimmed off White’s hands and in.

The PSHS offense was held in check throughout the match, and Ripley head coach Tim Ross knew that inability to take advantage of South miscues was why his team struggled at times in the first half.

“I think at the end of the first half, we talked about what we needed to work on,” Ross said. “I told the boys, ‘I’m telling you what, South came here to play ball.’ They weren’t the same team we saw, or anyone else saw earlier in the year. My compliments to the Parkersburg South coach and the players. They played outstanding in the first half.”

Two more Gainey goals in the first 14 minutes of the last 40 broke the game open, as his four-goal outburst paved a path for the 9-8-2 Vikes to PHS’s Stadium Field for a 6:30 Thursday night showdown.

“It was just a matter of my teammates playing it through to me,” Gainey said. “It was really them setting me up for easy goals. They were originally marking (Boyce) in the first half, but then we switched him with me, and it opened me up. (Boyce) is a team player, and he doesn’t mind doing the work that doesn’t get seen.”

The Patriots end the year at a 2-21 mark, and head coach Jamie Whitlach knows his team is young and could develop in the near future. It’s that optimism that gives Whitlach plenty to strive for in the following season to come.

In the case of Brace’s injury, he chased down a ball and whipped his head back due to his momentum. At that point, he fell to the ground unconscious and was later taken to Jackson Memorial Hospital where, at last update, he was last waiting for a room.