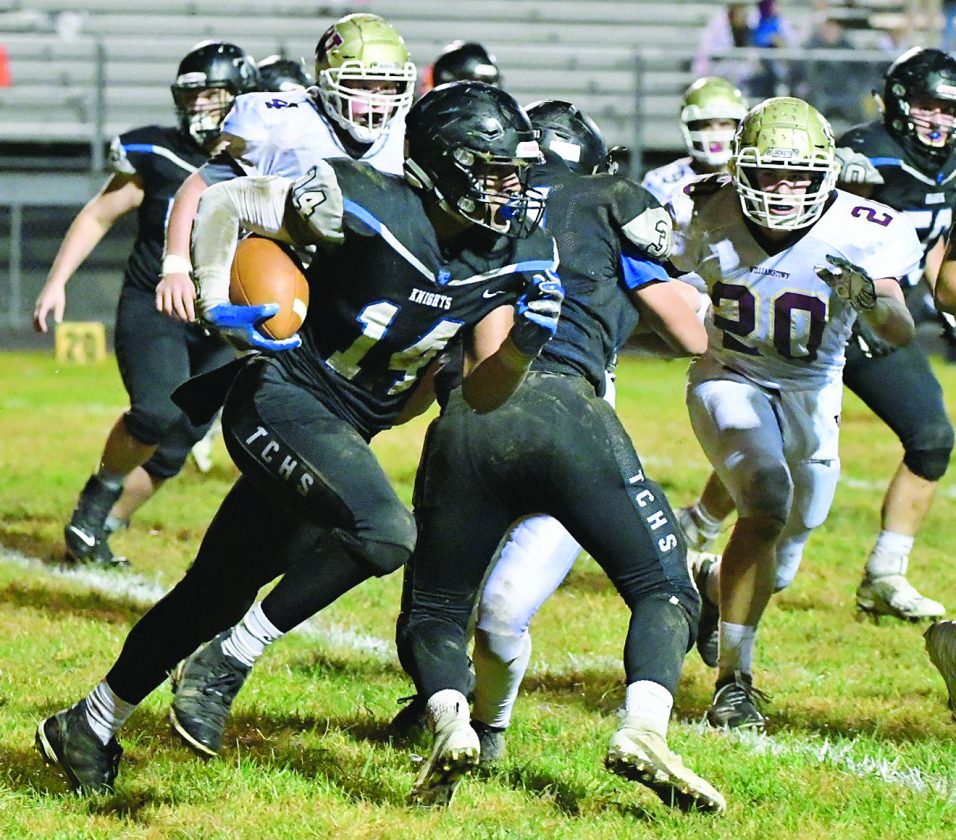 KIDWELL — Although Williamstown was up by eight at halftime, it seemed like all the momentum was in favor of Tyler Consolidated. Mark Rucker found a gap and raced down the sidelines as time expired for a 63-yard score to get the Silver Knights within one possession.

Then, the 7-1 Yellowjackets came out of the locker rooms with the first possession of the second half. Tyler Consolidated forced a turnover on downs. With its backs up against the wall and the Silver Knights knocking on the door to score, Williamstown needed a big play. Sophomore Trevor Oates came up big as he sniffed out a Gage Huffman pass and intercepted the ball on the goal line.

The turnover gave the Yellowjackets the spark they needed as they scored on their next possession and ran away with a 46-28 victory over the Silver Knights Friday night.

“We were able to get some yards running the ball,” Williamstown coach Terry Smith said. “But when No. 14 (Rucker) touched it, he scored. He did it the first half. It was a great play by oates who got some pressure there. Our offensive line did their job, Ty Moore ran real well. It’s just one of those things, maybe who had the ball last here at the end.”

Moore certainly did. The senior galloped for 288 yards and five touchdowns to pace the Yellowjackets. He secured a 70-yard run on Williamstown’s first possession after the interception and finished the drive off with a 7-yard run to put the score at 38-22 with 4:40 left in the third quarter. Moore also scored the final touchdown of the game for Williamstown while also compiling a 25, 50 and 7-yard scoring runs in the first half.

“Ty works hard,” Smith said. “He’s deserves everything he gets and he would tip his cap to the offensive line.”

The Silver Knights (4-3) responded with a touchdown on their ensuing possession. Huffman connected with Jayden Helmick for a 23-yard score to make it 38-28 with 2:56 left in the third.

It was the second time the two hooked up on the night as Helmick hauled in a 15-yard pass from Huffman for the game’s first touchdown.

On the ensuing possession for Williamstown, Moore led a 12-play drive capped by a 2-yard score by the senior to put the game away.

“We had some momentum going into halftime. Still down one score, we got a big stop on defense to start the second half. That was huge,” Tyler Consolidated coach Ryan Walton said. ”

We drove the ball down the field. you can’t just line up and run, run, run. You got to keep people honest and that’s what we were doing. (Oats) made a nice play.”

Rucker was just as effective as Moore for the Silver Knights. The senior back rushed for 250 yards and two scores including his 63-yarder as time expired in the first half.

His first score came on the first offensive possession after Moore’s 50-yard dash to the end zone that tied the game at 16-16 with 7:27 left in the first half.