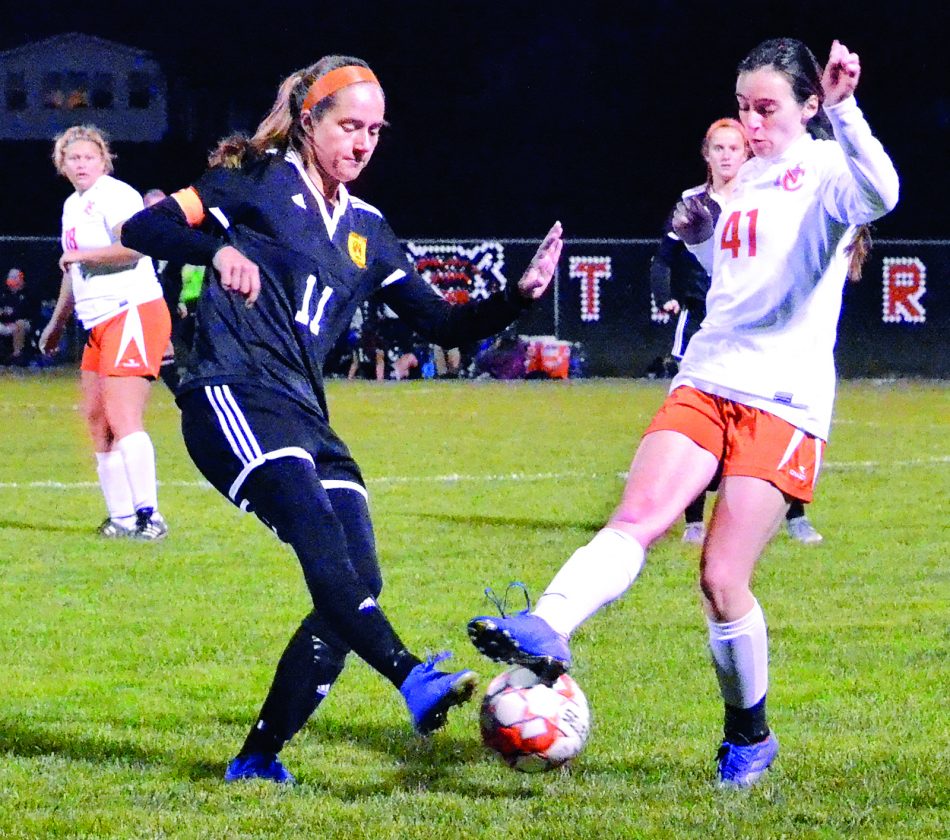 DEVOLA — Claire Schenkel has had the hot foot of late.

The Marietta left winger scored two goals for the second straight game to lead the third-seeded Tigers to a 4-2 triumph over the North Canton Vikings in an Ohio Division I sectional semifinal at Jerry Brock Field Thursday night.

Schenkel, sophomore, had two goals in her previous match at Williamstown last week.

Courtney Schuck and Jessica Smith added each added one goal for the winners.

Maria Pfaff and Schuck had one assist apiece, while keeper Jocelyn Rings was credited with three saves.

“The girls are moving the ball pretty good,” said MHS head coach Jeff Price. “As long as we do that, we’ll be in good shape.”

Marietta, No. 15 in the Ohio Division I State Poll with a 16-1-0 overall record (6-0 East Central Ohio League), advances and is scheduled to play at second-seeded Boardman at 7 p.m. Monday. Boardman defeated Canton GlenOak, 2-0, in a semi Thursday evening.

“It’s always good to have your last game here, a win,” Price said. “We knew North Canton wasn’t going to be an easy team, because they’ve played tough teams all year long.

“But I think for the most part, we outplayed them.”

Brian Girdlestone-coached North Canton exits with a 4-14-0 overall mark. The Viking goals were scored by Katie Frutschy and Malia Marinelli.

Early in the opening half, Schenkel staked the Tigers to a 1-0 advantage when she beat Merda with a shot just inside the left post. Pfaff, a senior co-captain, got the assist.

Marietta co-cap Sam Zumwalde came close to scoring twice during the first 40 minutes. But one of her shots hit the crossbar, and another was nicely saved by Merda.

At the 10-minute intermission, the Tigers clung to a 1-0 lead.

Shortly after the break in the 46th minute, Schuck got a hustle goal when she stole the ball from a Viking defender, and booted it into an open net. Merda was out of position when she came out to challenge Schuck.

North Canton came right back to cut it to 2-1 when right after a left-side corner kick, Frutschy booted a loose ball in the box over Rings’ head.

In the 51st minute, MHS got that goal back to maintain a two-goal cushion on Schenkel’s second goal of the match on a loose ball after a Schuck right-side CK.

But once again, the Vikings rallied when Marinelli scored to reduce the deficit to 3-2.

“We kind of let a couple (goals) in that we shouldn’t have,” Price said. “We need to stop doing that.”

Needing an insurance goal, Marietta got one when Smith put the finishing touch on a left-side cross by Schuck, making it 4-2.

“Now, we’ve just got to get ready for the next one (Boardman),” Price said.