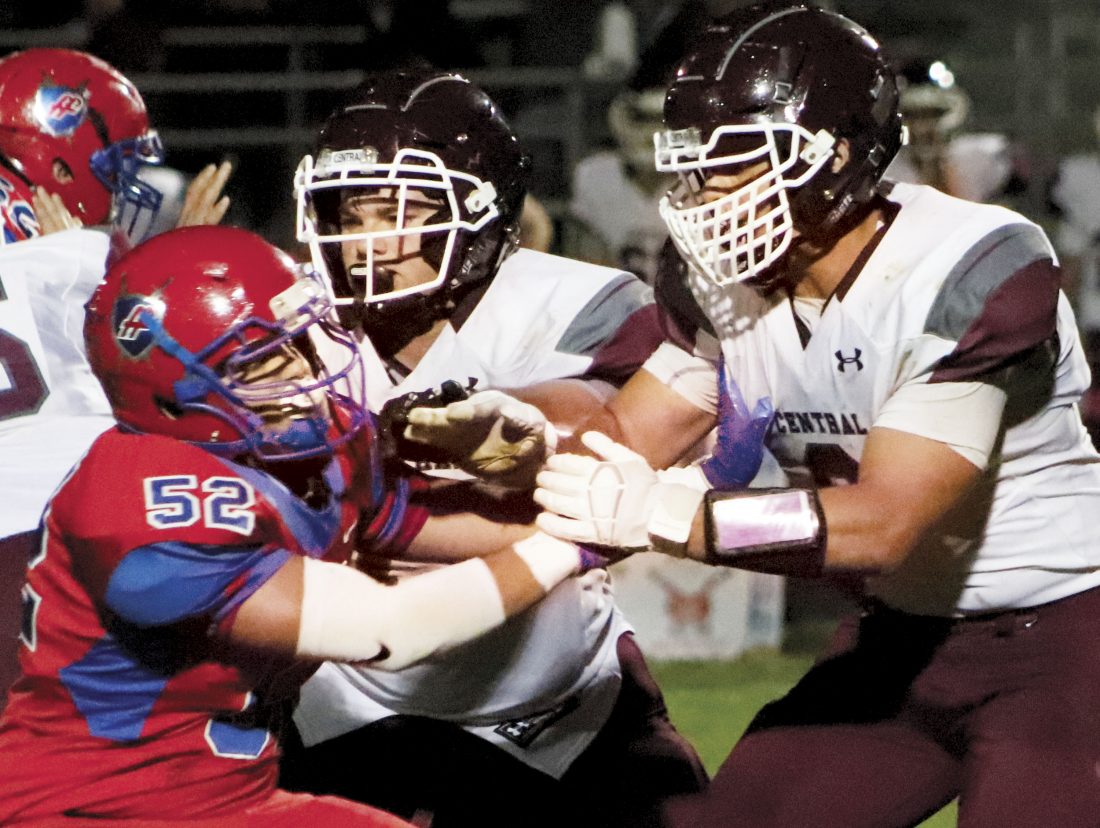 BEVERLY — Fort Frye head coach Eric Huck did not see the final outcome of the homecoming matchup against Wheeling Central reading the way it did after the clock reached full zeroes Friday night at Cadet Stadium. The 12th-year head man knew his Cadets and staff faced a good football team. One group capable of giving the Cadets a game.

Instead, Wheeling Central all-state quarterback Curtis McGhee III left after a single offensive and defensive series and the Maroon Knights had no traction all evening.

Huck’s group capitalized by scoring in every quarter on the way to a 6-0 record in a 42-0 romp over the West Virginia Class A two-time defending state champions.

“Wheeling Central is a really good team and our coaches told us what they were capable of and we just played hard and did what we could do,” said offensive standout Zane Wallace.

For Wallace, that included combining with Tyler Fisher to create a one-two punch at running back responsible for more than 200 yards on the ground.

Fisher and he led a rushing attack that tallied 267 yards on 42 carries with a pair of plus 100-yard games. Fisher scored three times on the ground during his 122-yard, 14-carry performance, while Wallace racked up 106 stripes on 17 totes. Wallace also scored twice. His one-yard run in the third period increased Fort’s lead to 28-0 with 9:38 remaining in the third quarter. Quarterback Ian Ellis then found him in the back of the end zone for a tip-toe 20-yard touchdown with 10:45 remaining in the fourth quarter.

“The line up front I thought did a tremendous job with those big guys and making holes.”

Not only did the offensive line handle Wheeling Central, but the defensive line kept in check backup quarterback Jacob Rine and company to the tune of 42 total yards. Caden Fryman and Braden Schilling also ended two of the Knights’ most promising drives with interceptions. Fryman’s one-legged leap over the center of the field ended a Knight drive at Fort’s own 43-yard line. Schilling’s then set up the final score of the game as Owen Brown rumbled in from 11 yards out with 4:20 remaining in the contest.

“We knew we were in a battle from the very beginning because of the schedule they play and the way they execute and when Curt went down it definitely gave us a shot to cause us to lose composure somewhat and wonder what we were going to do because he is such a big part of our offense and our defense,” said Wheeling Central head coach Mike Young. “But credit to their coaching staff and their team and their program credit to what they did. They have an excellent team and they will definitely make some noise in the postseason.”

Fort Frye imposed its will from the beginning of the contest. McGhee, for the only series he was in, didn’t get to run the ball once in an opening three and out. The Cadets then took control at their own 38-yard line and picked up three first downs on the way to Fisher’s score from 11 yards out. Huck and company put on full display what Wheeling Central would struggle with all evening in the opening drive. Misdirection and counters left the Maroon Knights to guess who had the ball in the offensive backfield. Fisher started a run up the middle before dancing around to score in the left corner of the end zone.

“They executed excellently and ran the counter very well were very deceptive with where the ball was and we haven’t faced a team like that all year,” said Young. “We faced Linsly which is a power wishbone to power at you and they were ready to play and came out and did an excellent job and credit to them.”

Huck and company now head into a road trip against Ohio’s Division V Barnesville next Friday with momentum.

“I told the boys congratulations but we know what we are capable of know. I am really proud of the way they played and how hard they played and I could tell all week they wanted this game and the bar is raised just a little higher now.”