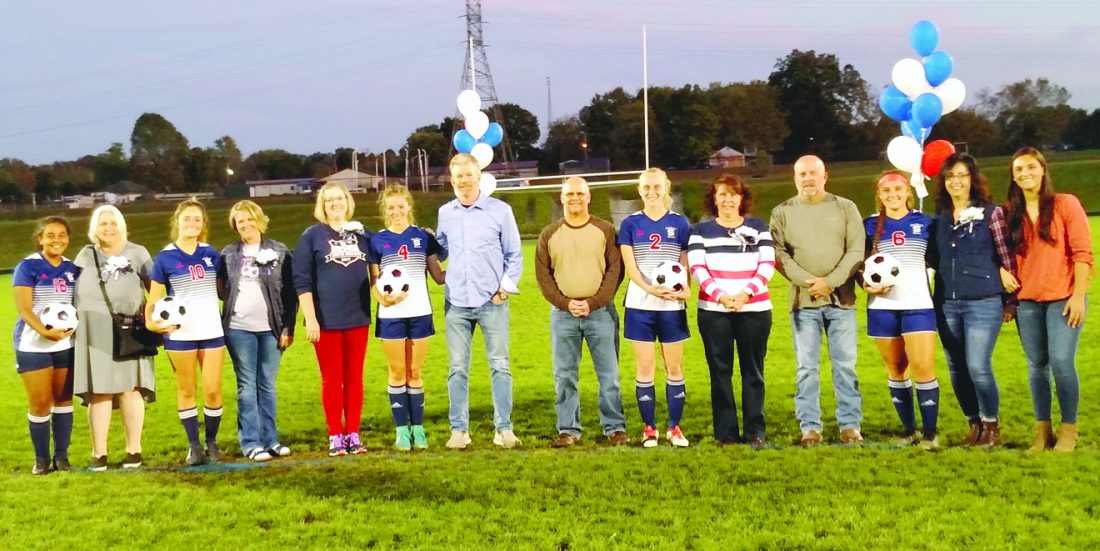 PARKERSBURG — Senior Night for the Parkersburg South Patriots girls soccer team took place on a chilly Tuesday night, and it was a successful one. A lone Samara Nunn goal was all South needed to win in a 1-0 affair. Scored in the 12th minute, Nunn received a feed from senior Jessica Life in transition. Nunn shot it just out of reach of the GW keeper to score the deciding tally.

The rest of the match was a defensive clinic put on by both sides throughout the remainder of the match. South keeper Kendal Mader made the most of her opportunities in the net, as she recorded a handful of saves in crunch time to ultimately put the match on ice. In the 22nd minute, a shot scorching from right to left was snatched by Mader to keep the game safe at 1-0. Those kinds of saves were a recurring theme with the sophomore.

Her biggest save came in the 78th minute, when GW’s Lindsey Hackney fired from just in front of the PSHS net. Mader took a dive at the ball and avoided disaster with the winning save. This victory puts South at 10-6-2 with one last home contest against Charleston Catholic slated for Saturday at 2 p.m. (and it extends the teams unbeaten streak to six in a row), and with the postseason right around the corner, this win over a now 12-5-2 George Washington team sets coach Ron Bucholtz’s Patriots up for big things in a crowded sectional.

“I’m pleased with the effort. We beat another quality team,” Bucholtz said after the win. “We scored the early goal and held on. They (George Washington) came in at 12-4-2 and basically tied Hurricane, who was the No. 1 team in the state last Thursday at 0-0. You know, hopefully that will give us some confidence going into the playoffs, as we realize we can play with anybody in the state.”

On the subject of the five seniors (Life, Faith Childers, Abby Homan, Joudy Youssef and Chloe Santore), Bucholtz was proud of that group as his young squad looks to transition without them on the pitch in 2020.

“It’s always a special moment when you have those seniors,” Bucholtz said of the halftime Senior Night festivities at the Erickson All-Sports Facility. “Especially with Jess, Abby and Faith, they’ve been with the program for four years. Joudy and Chloe were foreign exchange students this year, and they made a difference for us this year. It’s always sad to see players go, and those three we had for four years have excelled significantly. They’re all wonderful, young kids. If they put half the effort into their college and their future endeavors with employment as they did with playing soccer, they’re going to be very, very successful.”