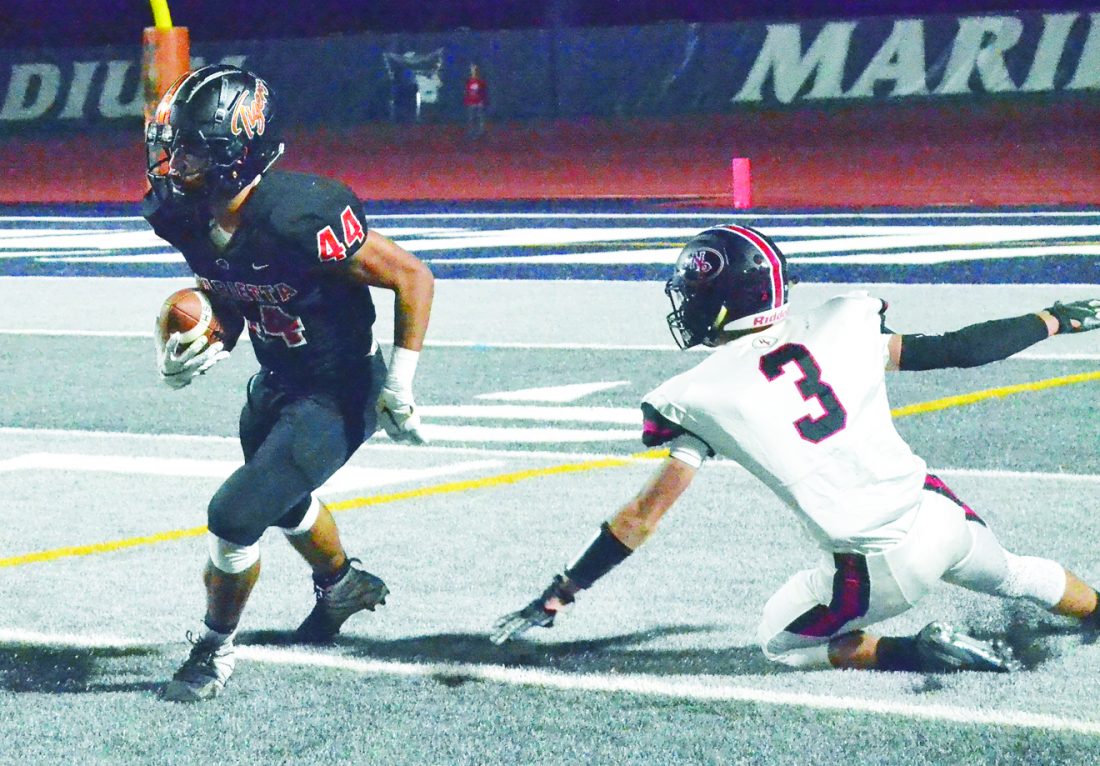 MARIETTA — Tony Munos gave the Tiger faithful something to cheer about in the fourth quarter.

The 6-foot-1, 180-pound junior had a 77-yard touchdown run, but it was too little, too late as Marietta High dropped a 49-14 decision to No. 1 New Philadelphia Friday Hall of Fame night in an East Central Ohio League football game at Don Drumm Stadium.

“That was a real nice run,” said fifth-year MHS head coach Jason Schob. “It was a jet play on the left side. He got the edge and made a real nice run.

“Linemen Jarrett Jackson and Aaron Hiener did a good job of blocking.

Munos finished the contest with 92 rushing yards on five carries and one TD.

Corbin Alkire scored Marietta’s other TD on a quarterback sneak in the second period. Alkire completed 18 of 28 passes for 92 yards and one interception.

“I was proud of our kids for never giving up,” Schob said. “They battled hard.”

Undefeated New Philadelphia, top-ranked in both the Ohio High School Football AP State Poll in Division III and in OHSAA Division III, Region 9 with an 8-0 record, never trailed in the game.

“They’re number one in the state for a reason,” Schob said. “They’re good ballclub.

“That’s the first time I’ve ever coached against a team that’s number one in the state.”

Wide receiver Jent Joseph led the Quakers with three touchdown, two receiving and one punt return. He finished the game with seven receptions for 113 yards.

Running back Reise Meechan added two TDs while Danny Gonzalez and Sam Zemis had one apiece.

Meechan rushed for 120 yards on 10 carries, and Zemis had five catches for 92 yards.

Elliot Warner was 7 for 7 on point-after-touchdown kicks.

New Philadelphia staked itself to a 28-0 first-quarter advantage with Joseph hauling in two May TD throws of 10 and 20 yards. Meechan also had 15 yard run to paydirt, and Gonzalez recovered a Tiger fumble and ran 15 yard to the end zone.

Early in the second quarter, Marietta cut it to 28-7 on Alkire’s short run.

“We had a 16-play drive against their (Quakers) first group, and I think that’s something we can build off of,” Schob said. “That doesn’t happen a lot to New Philly.”

Before the second quarter expired, NPHS tacked on two more scores on a 30-yard pass from May to Zemis and a four-yard Meechan run.

A running clock was in effect after the break.

The only scoring in the third quarter came when Joseph ran a Fourier punt back 54 yards to a TD.

And, with 5:29 left in the game in the fourth period, Munoz had his TD run.

“We did some good things, and the kids got after it,” Schob said.