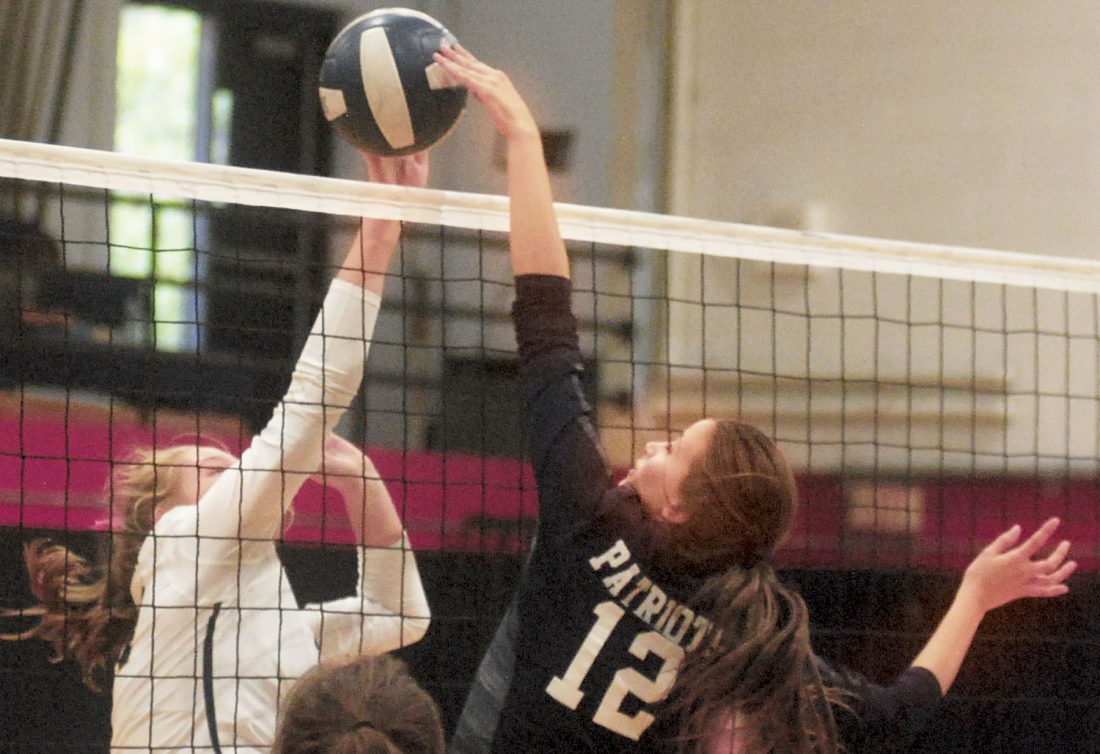 Magnolia’s Shaela Holliday and Parkersburg South’s Alana Brigner each make a play on the ball at the net during Saturday’s annual Fall Brawl inside Rod Oldham Athletic Center. The Blue Eagles ousted the Patriots in the semifinals, but lost to University in the title match. Photo by Jay W. Bennett

PARKERSBURG — Lauren Gaiser (17 assists) and Kyndra Pilant (14 kills) both had match-highs for Magnolia in the finals of Saturday’s annual Fall Brawl at Parkersburg South, but University High and head coach Don Godfrey hoisted the trophy thanks to a 25-21 and 25-13 victory.

Ashten Boggs led the Hawk attack with nine kills as Payton Foulks and Rachel Shockley combined for 25 assists. Mallory Napolillo and Olivia Kaddar put six attacks to the floor apiece in the victory.

“It was a long day. It was a good day for us,” admitted Magnolia head coach Pam Chapman, who got 13 digs and one ace from libero Kayna Anderson. “We threw in a freshman setter (Gaiser) today. First time she’s set in varsity. She’s a JV setter, but she had not set one varsity match this year.

“For having that in there, you know the setter is like the quarterback of your football team, she did a very, very nice job and we threw some other young kids in there that haven’t had any playing time and they did well.”

Napolillo’s ace gave the Hawks a 5-1 lead in the first championship set, but Blue Eagle Zoey Jenkins later had one of her own to make it eight apiece. Dominating play by Kaddar at the net with libero Anna Voris serving resulted in five quick points and a Magnolia timeout. Pilant had a flurry of five downed spikes. The last one came via a Kara Lynch bump set, which closed the deficit to 16-15. After Boggs put one to the floor, MHS closed it to one for the final time on a Jaci Rohde kill. However, a service error by Magnolia along with a kill and a block by Lindsey Wilburn gave UHS the momentum. Sierra Lanham’s kill got it to set point, which Napolillo served for.

Liza Clegg’s service tally thanks to a Pilant smash had set two even at three, but Boggs took over and got help from both Wilburn and Napolillo. Following an ace by Boggs, UHS was in complete control up 15-7.

Magnolia reached the finals by ousting the host Patriots of head coach Becky Bennett in three tough sets — 25-17, 12-25 and 15-8. Alyssa Kocher, thanks to a barrage of PSHS attack errors, served for the first five points of set three as Magnolia never trailed. Nakia Bracy got the Patriots’ first kill to make it 5-1 and it was 5-2 after Cassie Fink’s downed spike with Catreena Shears serving. The Blue Eagles weren’t going to be denied and got match point thanks to an ace by Jenkins. Pilant had 14 kills in the match. Fink and Makenna Gibson combined for 11 kills. The Patriots also got five blocks from Reagan Nutter, seven digs by Kylee McCorkle as well as nine assists apiece from Lauren Somerville and Haley Hatfield.

“We just need to go back and tweak some things and I think we’ll be OK,” coach Chapman added. “It’s a process and we are still working.