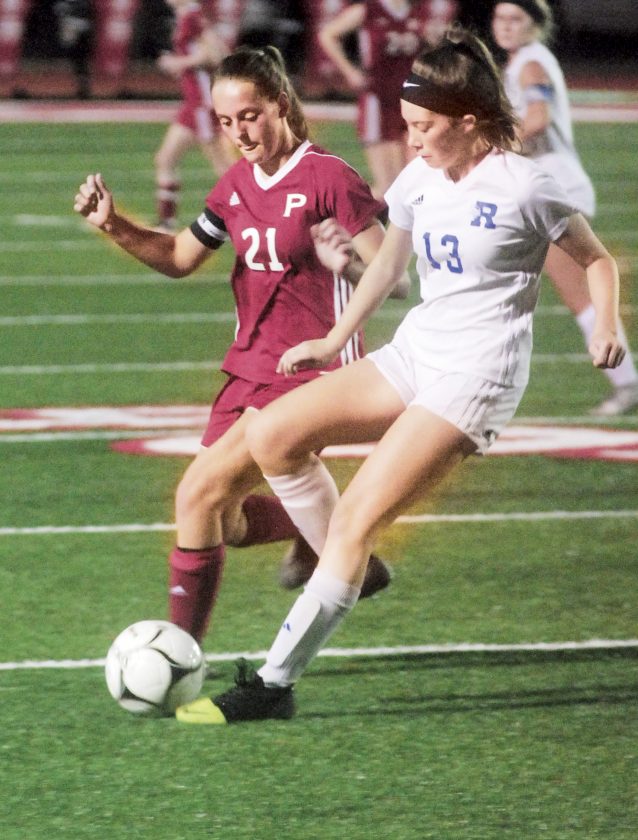 PARKERSBURG — Two goals a piece by Parkersburg junior Madison Spears and Viking senior Olivia Gandee wasn’t enough to keep the opening game of the class AAA Region IV Section 1 tournament from going to a penalty shoot-out after playing two full halves and two overtime periods with neither team finding the back of the net Monday night at Stadium Field. A big showing from junior goalkeeper Isabel Lynch in between the sticks and freshman Jenna Carpenter, junior Madison Spears and sophomore Emma Fleming all getting a shot past Vikings junior goalkeeper Ashley Craigo. The Big Reds season will continue as they move on to face Parkersburg South Wednesday in the sectional final

“We’ve been practicing penalty shootouts for the past couple of weeks. Isabel can make saves, especially in the PKs. I tell her to pick a side, read it judge it and fully commit yourself to it. Good things happen whenever you can get over there. She was able to compete with a couple stops and we were able to bury ours,” Big Reds coach Brad Morris said. ” I give my hats off to Ripley. They are a well-coached team and they got a couple of amazing athletes that we just kind of had trouble with throughout the entire game.”

Scoring two goals in the 14th and 56th minute, Lynch would get the best of Gandee on the first shot of the shootout, timing her dive to the right of the post for the save.

Ripley got the first goal of the shootout when senior Gracie Smith sent a rocket to the right post. Lynch was able to get her hands on the ball by correctly guessing the direction, but Smith’s shot was too much for the Big Reds keeper. Freshman Jenna Carpenter knotted things up when her shot found the back of the net. Senior Regan Carpenter and Spears each left the keeper frozen in the middle, when going to the bottom left corner. Senior Olivia Broom was denied when Lynch pulled the shot in and Fleming went left getting just past the keeper for the game-winner in the next shot.

“Definitely it is a heartbreaker, I feel bad for the seniors, of course, being their last year but you know there was probably a six, seven-minute span there in the beginning that we had a lapse of judgment,” Ripley head coach Steve Gandee said. “We weren’t ready mentally and let them get those two goals on us. Otherwise, I thought we did a really well in the back, create a lot of opportunities for ourselves upfront.”

The games first goal occurred in the 10th minute when junior Bethany Meek intercepted a Viking pass near her own box. The Big Red midfielder sent a nice through ball to Spears landing 20 yards past center spot, as the Viking defenders lost track of both the ball and Spears.

Now having a one-on-one opportunity with the Viking goalkeeper was coming out to apply pressure. Spears sent a dribbler past Craigo to bottom left of goal, putting the Big Reds first on the scoreboard.

The Vikings responded with a goal in the 14th minute, getting awarded a free kick about 20 yards out. Gandee sent a wonderfully free-kick going right of the post. Timing her jump perfectly as the ball was going to goal, Lynch got her hands on the ball but the ball went through the keeper’s hands for the tying goal.

Only a minute going off the clock, Spears and the Big Reds took a 2-1 lead off a dish from Meek near the left touchline.

Gandee equalized in the 56th minute, getting free from Big Red defenders off a turnover move after getting the ball from a throw-in.

Gandee went corner post on the right side, just outside of Lynch’s reach for her second goal of the game.

“Gandee is just a force to be reckoned with, I think she went through about three or four my defenders tonight. She put us through the grinder, luckily we held her off in the end.”