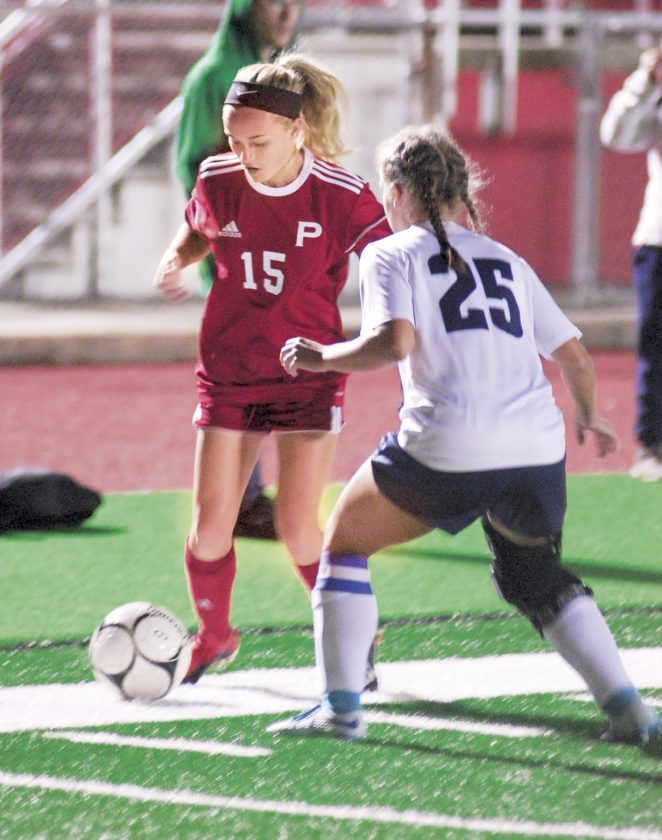 Photo by Tyler Bennett Parkersburg’s Madison Spears works to get past Spring Valley’s Maria Cassi (25) during the Big Reds’ 7-0 win over the Timberwolves Monday at Stadium Field.

PARKERSBURG — A Monday Senior Night at Parkersburg High School’s Stadium Field was a success, as the Big Reds blanked visiting Spring Valley to the tune of 7-0. Leading the offensive charge was senior Maddi Leggett, since she recorded a hat trick for the final time in a regular season contest at Stadium Field. Her first goal set the tone, and it was Madison Spears who helped her get it.

In the 2nd minute, Spears found her teammate with a header that gave Leggett an open look. Spears wasn’t done dishing out assists, as Jennifer Morris was the beneficiary of another Spears feed in the 28th minute. Up to that point, Spring Valley was still in the match. Goalie Zoe Runyon stonewalled a few scoring opportunities as they came at her, but the Timberwolves couldn’t hold off the upcoming Big Red scoring barrage.

Leggett netted her second goal just two minutes after Morris scored, and Spears broke away for a tally of her own with just a couple minutes left in the half. The final goal of the contest for Leggett came with mounting pressure by the Big Reds front line, as she reflected on this night and what the hat trick means to her.”

“It felt pretty good,” Leggett said of her three-goal performance. “Nothing really (went through my mind shooting the third goal) I didn’t really know I had scored three yet.”

A goal from Jenna Carpenter off an Emma Fleming assist in the 60th minute and another Morris goal with an assist by Brayden McNickle scored seven minutes later put an exclamation point on this night. Postseason soccer is on the horizon for the Big Reds, and head coach Brad Morris wants this match to serve as a good warmup for his girls.

“Hopefully this (Senior Night win) means a lot to them,” he said. “We’ve got three games left until we really start hitting the pavement, so we need to start putting together solid game plans on the field, and just understanding that it could be over really, really soon. It’s basically our story to write.”

The victory over Spring Valley gives Parkersburg (10-5-1) double-digit wins, and it puts them in position to size up the postseason field in the coming weeks. It’s something Morris doesn’t want his team to take lightly, as high-profile matches await.

“I always tell my girls each and every game is a learning experience,” he said. “You can usually teach more out of losing if you break it down and realize things need to change really quickly. We’ve had some unfortunate losses with one kick this way and one kick that way that could have totally changed games for us. Keeping our heads up and getting wins like this that are confidence boosters are always key.”