Five different ’Jackets found the back of the net 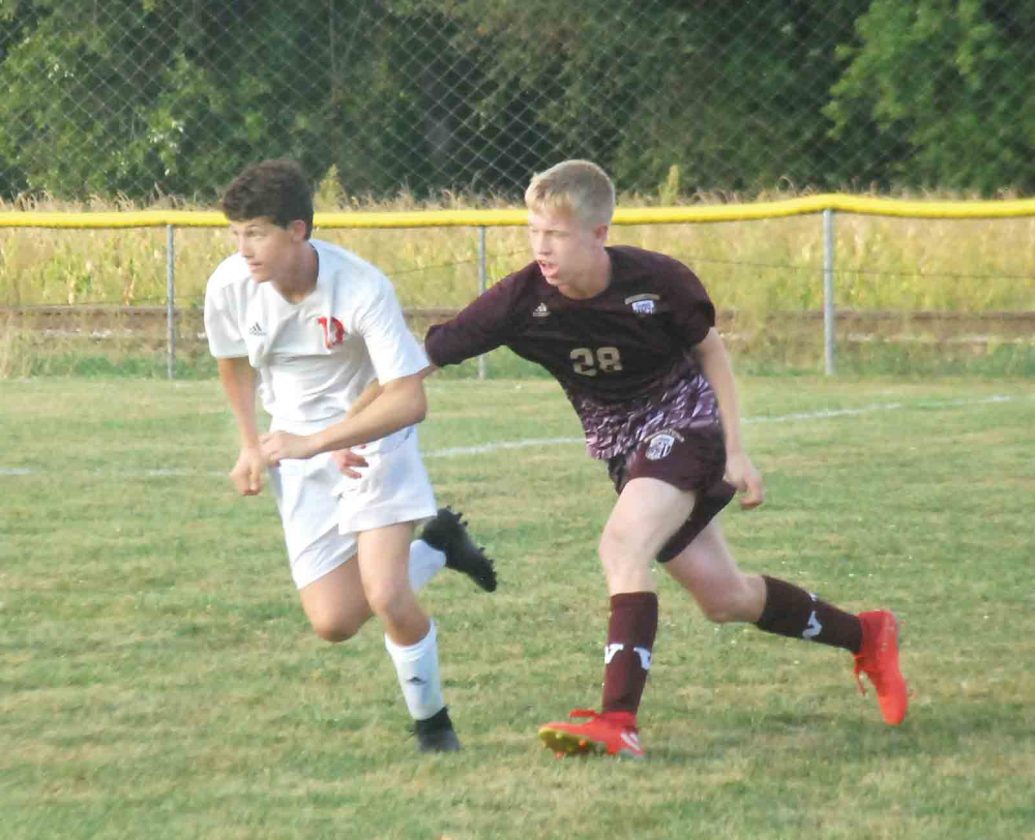 Photo by Josh Hughes Williamstown’s Seth Hammer and Ravenswood’s Ethan Rawson go for the ball during the Yellowjackets 5-1 victory versus the Red Devils Tuesday night at Williamstown Soccer Complex.

WILLIAMSTOWN — After the Williamstown Yellowjackets got off to a slow start in 2019, they continue to pick up steam as the postseason approaches in the next few weeks. The ‘Jacket boys welcomed Ravenswood in a Tuesday night showdown and won, 5-1.

A balanced attack featuring goals from five different Yellowjacket scorers put the game away midway through the second half. The scoring didn’t happen immediately, though.

Both defenses locked down in the early going until Gavin Bosgraf netted a shot in the 31st minute to get the home team on the board. That set the tone for the offense to come, as head coach Jason Hill talked about that goal.

“That goal was cool, because it was on his weaker, non-preferred foot,” he said. “That came after he tried to shoot one with his left foot just a few plays before. It wasn’t a tough shot, but I was encouraged that it was the proper shot from the left side. He just lifted it over the goalie, since he was out of position a bit. That was really cool.”

A few minutes later, the Yellowjackets displayed great spacing to get the ball up the field in transition. That led to Josh Erb’s goal in the 34th minute. Erb followed up a shot from Seth Hammer that was deflected by Ravenswood’s goalkeeper, and he scorched the one-timer in the net for the 2-0 advantage.

The only hope for the Red Devils came in the waning moments of the first half when Mason Butler drilled a shot past Baylor Haught to cut the lead in half. That was all RHS managed, as Haught was sharp in the second half.

Hammer opened up the second half with a score in the 43rd minute. After another Ravenswood deflection, he followed his shot to push the lead back up to two goals.

Garret Hill’s and Brandon Kiger’s goals put an exclamation put on the evening, as Ravenswood (4-3-1) head coach Todd Murray spoke after the loss about where his team needs to improve.

“On our end, it was just a lack of physicality. We didn’t pressure the ball a lot,” he said. “Whenever we were pressured by Williamstown, we just played silly and got desperate. We just kicked it and weren’t making proper passes to people.”

As Ravenswwod looks to bounce back on the road against Independence on Thursday, Williamstown (4-5-0) looks to take this momentum into the next couple games. That starts with its own Thursday evening matchup at home against Belpre.

“We’re closer. We’re digging up,” coach Hill said of the win and where it puts his team. “We’ve got a matchup here with Belpre (on Thursday). We hope to play a complete game, and then set up for Saturday when we go up to Point Pleasant. They’re going to be really tough. They’re probably going to be at the top of the section. We’ll really see where we stand as a team with the playoffs only a few weeks away.”