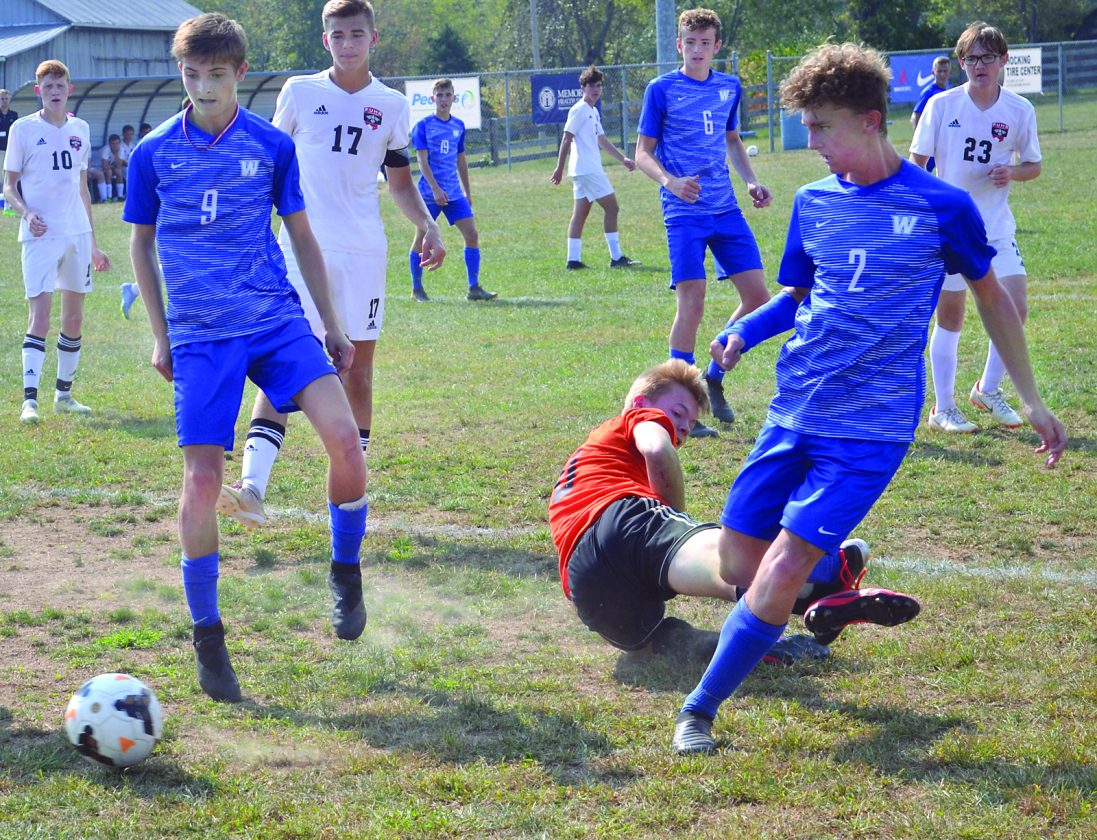 VINCENT — Ethan Yost figured in on all of Warren High’s scoring.

The senior standout had one goal and assisted on two others as the Warriors edged Fairfield Union, 3-2, Saturday in boys soccer action on the WHS pitch.

“Luckily we have Ethan,” said Warren head coach Ekrem Eksi, “because it was a very ugly game. We didn’t do anything that looked like soccer. It was kickball the whole game. I’m very disappointed the way we played.”

Alex Modesitt and Nathan Ritchie each had a goal for the Warriors (6-4-1), who bounced back from Thursday’s 3-1 setback to the Parkersburg Big Reds at Stadium Field.

“We really should have done better that game after scoring first but things happen,” said Yost of the Warren-PHS match

Both of Fairfield Union’s goals were on set pieces. Sweeper Samuel Bernard scored on a direct kick, while Bodie Hammack got one off a corner kick. The Falcons fell to 4-7-1 on the season.

“They (Falcons) picked it up in the second half,” Yost said.

During the ninth minute of action, Yost staked the Warriors to a 1-0 advantage with Falcons keeper Tyler McClellan on the ground and defender Mason DuBois marking him. Gavin Ott was credited with an assist on the goal.

“I just poked it right in,” Yost said.

Shortly after Yost’s left-side corner kick in the 14th minute, the junior Modesitt, with McClelland off the goal-line, booted the ball into the back of the net to stretch the Warrior advantage to 2-0.

About a minute or so later, though, Fairfield Union cut it to 2-1 when sweeper Samuel Bernard drilled a direct free kick past Warren keeper Jackson Petty.

With approximately 12 minutes remaining in the opening half, Yost went on the attack on the right flank and rolled a nice left-side feed to Ritchie, who beat McClelland with a shot.

Warren led 3-1 at the intermission.

After the break, the Warriors went scoreless while Fairfield Union reduced the deficit to one when Hammack put the finishing touch on Cade Groce’s left-side corner kick. Petty never had a chance on the shot.

“I think we played decent the first half and not in the second half” Yost said. “But we got the result we wanted.”

Warren is scheduled to play host to Athens at 7:30 p.m. Tuesday. The Warriors dropped a 4-2 decision to the Bulldogs in the first meeting at The Plains in late August.