Patriots and their QB roll past University 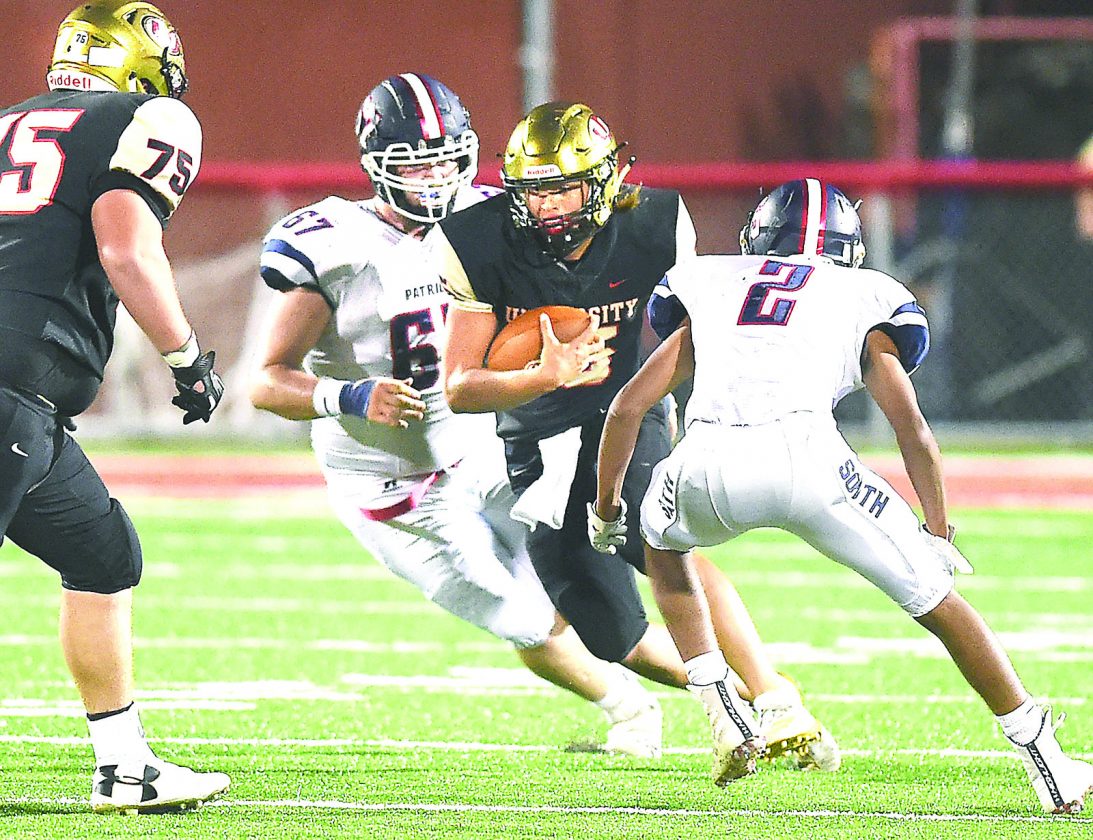 ORGANTOWN — There was a lot of bad, especially early, for the University High football team Friday night against Parkersburg South, but head coach John Kelley wasn’t quite as upset as most coaches would be following a 48-14 loss at home.

The first half numbers were not pretty for the Hawks (1-1) — they mustered just one first down and rushed for minus 11 yards. The UHS defense didn’t fare much better — the Patriots (2-0) scored 27 unanswered heading into the locker room after dominating every phase of the game.

But the second half showed a glimpse of what the young Hawks could be capable of if they continue to buy in to what the coaching staff is telling them.

After a surprising win in Week 1 over John Marshall, the first half went the way many expected the entire season to go, but UHS came out in the second half and didn’t quit, which is what the coaching staff wanted to see despite the end result.

“I was really pleased with the way we came out and played,” Kelley said. “I was pleased with what we did offensively and I think we did some good things against the same people we couldn’t do anything against in the first half.”

There was an effort to give the ball to bruising senior running back Logan Raber, who was finally able to get positive yards on the ground. But the big play was a 39-yard pass from quarterback Joseph McBee to freshman Jaeden Hammack, who was brought down at the 1-yard line.

Raber finished the drive by powering in a touchdown, which was followed by an interception by Hammack to turn the momentum totally in favor of the Hawks.

After a controversial no-catch ruling by an official on what would have been another UHS touchdown, there was confusion on a pass interference call on 3rd down that many thought was an automatic first down for the Hawks, but instead, it was half the distance. On 4th down, Raber ran it, but was stopped at the 1-yard line.

The momentum slipped away, as and Parkersburg South scored three-straight touchdowns to put the game away.

But Kelley refuses to be disappointed, though he knows there are glaring weaknesses that have to be worked on.

“I came away from that actually not as miserable as I thought I would be,” he said. “At 48-14, you’d think, ‘Oh wow,’ but I saw a whole lot of positives, especially late third and fourth quarter.”

For the Patriots, quarterback Brandon Penn was electric, finishing with 132 yards rushing with two touchdowns and 106 through the air with another two scores. Running back Devin Gaines had 155 yards and two touchdowns, and receiver Dylan Day grabbed five passes for 54 yards and a score. Day also had a rushing touchdown.

“Those three kids have put in a lot of work this offseason since I got here,” head coach Nathan Tanner said. “All three are exceptional athletes and they’re even better kids. They show up to work every single day and they do what they’re coached to do. On top of that, they make plays, so it’s a lot of fun.”

UHS will travel to Brooke on Sept. 13 for its first road game of the season.