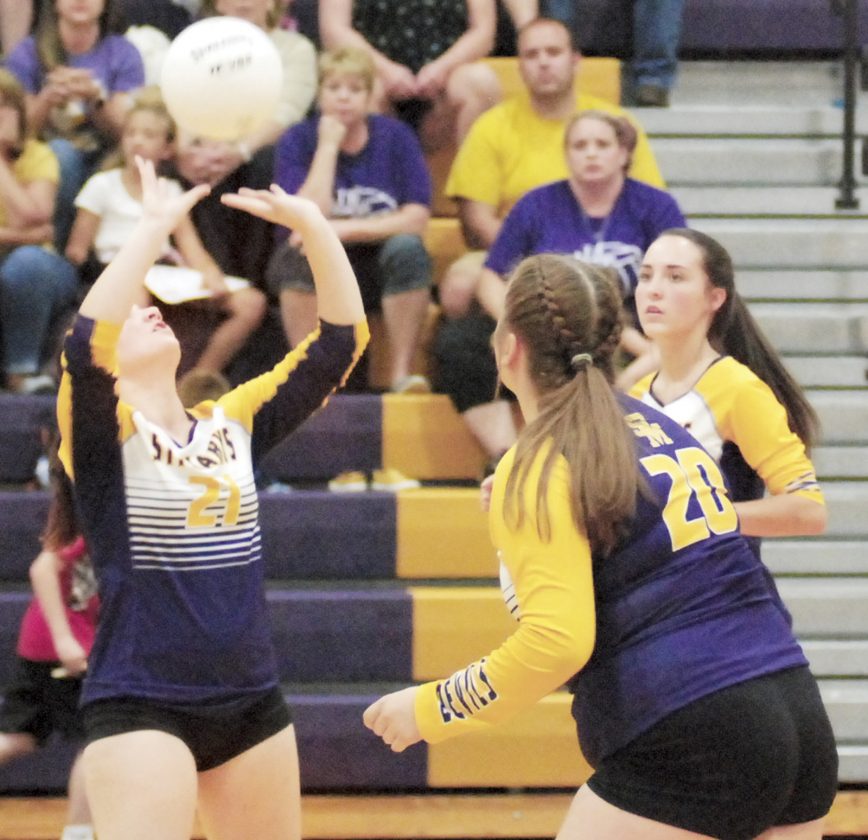 St. Marys’ Cara Masters sets up a spiking opportunity for the Blue Devils during the team’s match against Parkersburg Christian Monday at Wood County Christian School. They lost in straight sets. Photo by Josh Hughes

WILLIAMSTOWN –Three teams hoping to find their groove in the early going of the 2019 volleyball season did battle in a tri-meet Monday night at Wood County Christian School. After host school WCC dispatched of Parkersburg Christian in two sets, the Knights turned their attention to St. Marys with redemption on the mind. They got that redemption with plenty of time to spare.

The Blue Devils struggled out of the gate to get anything going, as they fell in straight sets, 25-10 and 25-19.

In that first set, Parkersburg Christian jumped out to an early 8-3 lead that forced SM head coach Tina Carpenter to call a timeout and stop the bleeding. Unfortunately for the Blue Devils, the breather didn’t lead to a different result.

The Knights displayed efficiency around the net, as quick volleys close to the net couldn’t be hit back over by the St. Marys front line.

One more Blue Devil timeout at 20-9 was too little, too late, as back-to-back aces from Lou Masi Lott sealed the deal in the first set.

Set two featured more back-and-forth action with longer volleys, but the small deficit couldn’t be overcome by St. Marys. They lost 25-23 and 25-14

A 4-3 SM lead after a fault from Jayla Gard set them up for big things in the set, but the Knights continued to respond.

A fault from Gwen Fluharty fueled PC, as three of its next four points came via the ace. A kill from Paden Hatcher and point scored from Teddi Northrop off an assist from Katie Lemon helped keep the set it striking distance at 16-12, but two quick answers from the Knights forced coach Carpenter’s hand in calling her final timeout of the match.

Two more aces apiece from Gard and another Knight teammate did too much damage, as St. Marys had to try and rebound against the Wildcats.

They came out strong in response to their earlier loss by rattling off six points in a row to jump all over WCC. Mackenzie Smith was a force at the net, as she sent back multiple offerings from Wildcat spikers en route to three of the set’s first four points.

Even after the timeout, St. Marys continued to roll for the time being. Multiple shots that were placed wide and an ace from Cara Masters led to a 9-1 lead. Then, the tide turned.

With that said, the Blue Devils held onto a slightly shrinking lead when they took a timeout up 16-10. Following four straight aces from Stella Dunn trimmed the advantage.

A series of miscommunications finally gave the Wildcats the edge in the intense first set, as they finished off that first set with a Dunn assist on a set-sealing Carsyn Wharton point.

That loss was a critical blow to the Blue Devils, as a timeout down 12-7 in the following set could only prolong what was going to happen. Down the stretch an 18-7 run cemented the WCC victory, and that’s a win WCC head coach Carrie Warren can use to motivate her young squad.

“It works really well for us,” she said of the wins. “We had a rebuilding year last year and this year, so the wins here and there help us build our confidence.

The two losses for St. Marys drop them to 0-4, as coach Carpenter had a message for her team.

“We’ve got to be mentally-strong,” she said to her team. “We get down a couple points, and I can see it in your eyes. We’ve got to keep playing, and we’ll get there.”