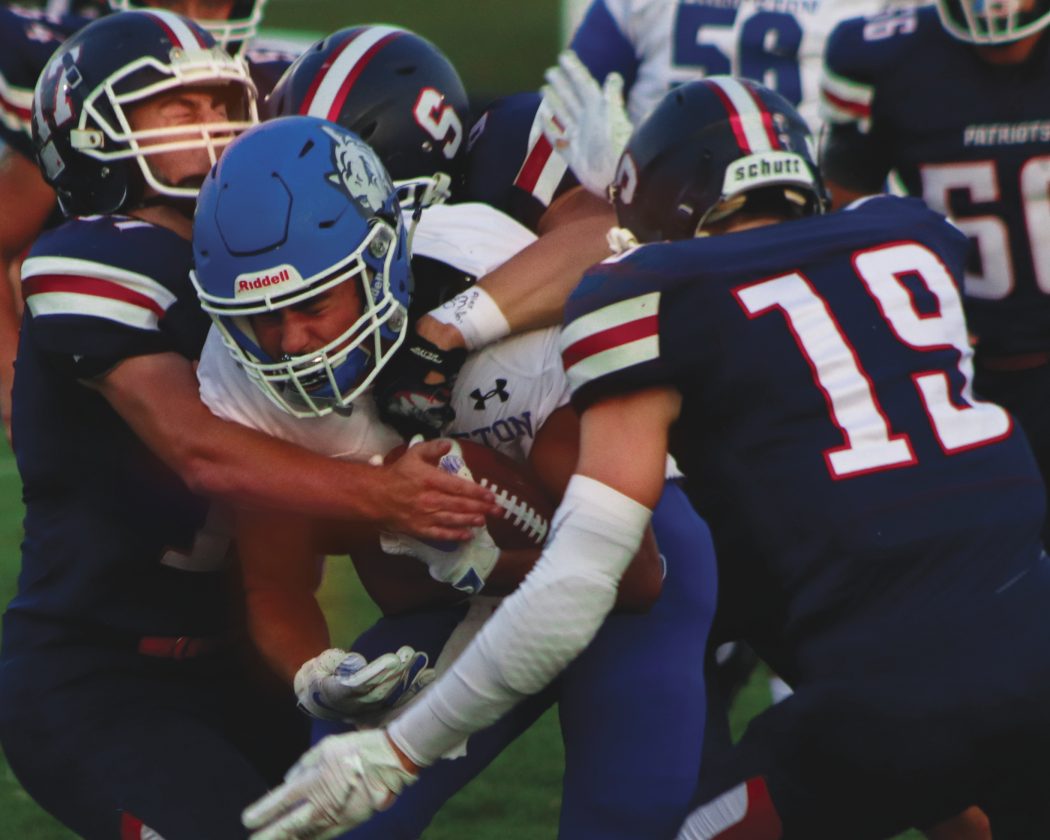 PARKERSBURG — Head coach Nate Tanner and his Parkersburg South Patriots improved to 4-0 for the first time in 15 years after a dominant performance Friday night at Erickson All-Sports Facility.

South’s offense continued its blistering pace set through the first three games of the season with 582 more yards of offense.

It was the third time the Patriots’ unit ecplised the 500-yard mark in the first four games.

Quarterback Brandon Penn contributed 333 of those yards and Devin Gaines rushed for another 122 stripes as the Patriots walloped visiting Princeton, 55-18.

Penn acounted for five of those touchdowns (four through the air and one on the ground). He also looked sharp in the pocket by completing 15 of 18 passes for 270 yards with zero interceptions. Several of his throws led his receiver beautifully or were placed only where his receiver could catch the ball.

Two of those came in a 35-6 scoring outburst in the second quarter that saw the Patriots permanantly pull away.

Landon Francisco hauled in a 63-yard scoring pass from Penn. The quarterback then took a fake punt 54 yards to the house from his punting position on a fake.

“That second quarter we really opened stuff up and started executing in all phases. Once that happened we just kept the pedal to the metal and just did what we do,” said Tanner.

The overall game was a huge letdown for a Princeton squad eager to build off a 49-9 win over Oak Hill last week.

The Tigers also hoped to avenge a 37-0 loss one season ago at the same venue.

Penn snared two of those interceptions, while Sam Schuler and Francisco each picked off one as well.

Tanner’s team capitalized on all of them with trips to paydirt.

It was a common site to see South celebrate a touchdown. They found the end zone on all but four drives on the evening. One of them ended with a lost fumble and the other three in punts.

Princeton put the heat on early as Cochran connected with Ethan Parsons from 25 yards out for a 6-0 lead just four minutes into the ball game. The score came after a surprise onside kick to start the contest.

The Patriots tried to respond the next possession, but Princeton was ready for the fake punt. Penn was stopped well short of the first down marker. This gave the Tigers another opportunity to put a score on the board. They took over at the 30-yard line. Penn though made up for his earlier gaffe with his first interception of the evening.

Nine plays later, Gaines found the end zone for his first score of the evening to open the floodgates for the Patriots. South scored an unanswered 28 points before Cochran found Brady Martin for an 8-yard score with 5:08 left until halftime.

“We didn’t come out the best we could. But we obviously responded and our offense is very explosive,” said Penn. “I was worn out from all the plays I was making but luckily I didn’t cramp this time and was able to play in the second half.”

Despite the positive outcome, Tanner and Penn both sided things to fix.

Tanner would like to see his team be sharp in the first quarter and more alert. He also wants the penalties and turnovers eliminated. South lost a fumble and committed seven penalties worth 55 yards.

“You can’t turn the ball over or have penalties against really good teams or else it is going to bit us in the butt,” said Tanner.