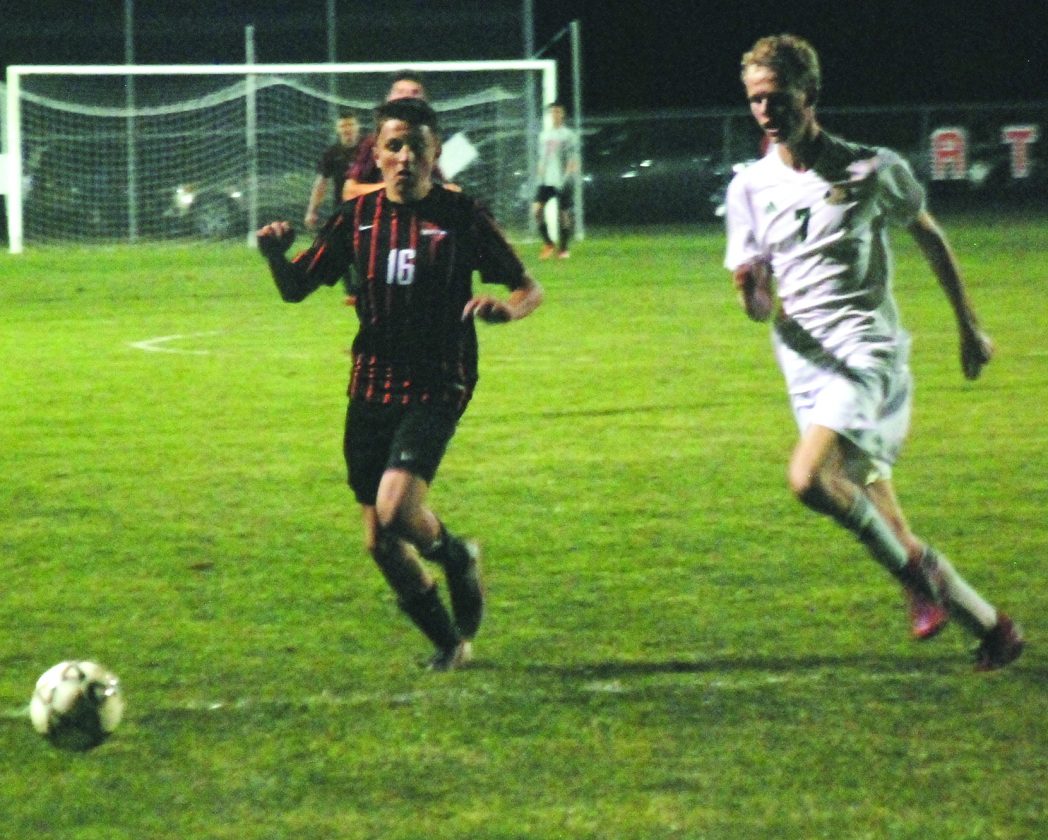 DEVOLA — Losing 2-1 to Athens in last year’s district finals, the Marietta Tigers didn’t let their second chance versus the Bulldogs go to waste.

Led by another hat-trick by senior forward Ryan Mannix, which brings his total to 20 on the year, the host Tigers scored three goals in both halves, in rout of shutting out the visitors 6-0 Thursday night at Jerry Brock Field.

Improving to a record of 9-0-1, the Tigers never gave the Bulldogs a chance, controlling possession of the ball and midfield for the majority of the game. And when the Bulldogs did take possession, the Tiger defenders quickly played the numbers game to regain possession.

When the Bulldogs did get into the Tigers’ side of the field, Marietta defenders did their job by playing physical with Athens’ forwards and intercepting passes. It wasn’t until the second half until the Bulldogs recorded their first shot.

More busy in the second half compared to the first, senior Tiger goalkeeper Justin LaBarre kept the Bulldogs out of the net with two saves.

“They knocked us off in the district final last year, it was 2-1 So it’s kind of redemption that way, but also, we just want to leave our mark and leave our stamp on this regular season. We come up with the work rate that we want and play the style that we want to play and put the pressure on them,” Marietta coach Todd Morris said. “We could pin them back and play most of the game in their half of the field, which is pretty much what we did.

“Our play from our backline, Adam Coil, Jackson Graham, Jantzen Gebzyck and Cayden Wheeler just did outstanding. Their forward is an awesome player. He’s burned us in the past, so we paid special attention to him. It’s just great, great effort all around.”

After coming out in an attempt to stop senior Cade Gandor’s shot on goal during the 1st minute, Bulldog goalkeeper Mitchell Finn went down with what appeared to be a lower leg injury.

After getting checked on by trainers, Finn was able to leave the game under his own power, but he was walking while not putting full pressure on his injured leg. Coming from the midfield, Will Pigman replaced Finn in between the sticks.

The Tigers quickly went on the attack, after receiving the ball outside of the box on the left side on a throw-in. Senior Jake Craven fought off Athens defenders for enough space to pull off an impressive chip-in that bounced in off the right post, breaking the deadlock in the 11th minute.

Getting awarded a free kick in the 18th minute, the Tigers were in striking distance about 30 yards from goal. Craven put enough on his kick, as the ball made into the box and bounced around before Mannix was able to get a good look at the goal and drilled it home for the Tigers’ second goal of the game.

Mannix scored his second goal of the game off a wonderful through ball from Craven, who made the pass from the centerline, with just 3 minutes until halftime. Receiving the ball in the second half, the Tigers immediately put the ball into the Bulldogs’ box, a Marietta player was fouled and the Tigers was awarded a penalty.

Stepping up for the Tigers was senior Ethan Feathers, Feathers didn’t mess around with the shot, going right down the middle for Marietta’s fourth goal of the night in the 41st minute.

Just minutes after nearly getting his hat-trick in a free look at the goal, Mannix finally got his third goal of the night, off an assist from Gandor in the 69th minute. The Tigers got their final goal of the night thanks to a missile fired by sophomore Cayden Wheeler outside the box. Pigman was able to pull the shot in, but the ball bounced off his chest and rolled into the goal between his legs for the sixth goal in the 75th minute.

“Ryan his energy and work rate was just so incredible. He was causing so much trouble for their backline. So much trouble with just his high press he’s got those long legs,” Morris said. “He just disrupts their passing angles and passing lanes. He’s finishing and that’s the name of the game is to score more goals than the other team, so Ryan is playing very, very well this year.”